Here’s a New-Year thought, courtesy of Pat Ruddy at The European Club: A recent study found that the average golfer walks about 900 miles a year. Another study found that golfers drink, on average, 22 gallons of alcohol a year. Which means that your typical golfer gets about 41 miles to the gallon.

Through the wonders of Google, I came across this humorous nugget and it immediately brought back delightful memories of Pat Ruddy and his marvelously designed The European Club in County Wicklow, Ireland.

My first meeting of Pat (excuse me, but I’m eschewing the usual journalistic standard of using his last name only in subsequent references) took place more than 20 years ago. Part of a group of American golf writers playing various Irish courses at the time, I had the good fortune at dinner to be seated next to this affable and husky man at a castle outside Dublin. A special guest and local resource for our informal dinner program, Pat was the Editor of Golfer’s Companion, a respected golf Irish magazine, while also in demand as a well-regarded course designer.

In the course of our lively dinner conversation Pat finally mentioned, in his humble understated way, how he recently designed and built a links course 35 miles south of Dublin in Brittas Bay, in the Wicklow area. He told how he had rented a helicopter and scoured the eastern coastline of Ireland looking for the ideal terrain for a genuine links course. After finally locating the property, he and his family drew upon their modest finances and with a lot of “sweat equity” built The European Club. It was a compelling story and it whetted my appetite to play the course. I can’t recall the circumstances (maybe weather, timing or travel distance) but The European Club was not on our itinerary. This omission didn’t faze our esteemed dinner guest at all. “No matter,” Pat said, smiling. “It will be here the next time you visit us. In fact, it’ll still be here in a hundred years.” Now here’s a man with patience and vision, I said to myself. 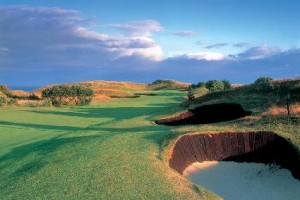 The European Club: the natural flowing landscape of a genuine links course

Fortunately, it didn’t take me a hundred years to experience The European Club. Several years later, I played it and fell in love with it. Although somewhat sparse in terms of its amenities and a little rough around the edges, it was still a gem, an emerald mounted on some lesser alloy. Pat’s helicopter tour of the coastline years ago was indeed a smart investment because discovering this genuine links terrain was a godsend. Unlike so many Irish and Scottish links courses, the views of the sea here are well-exposed and visible throughout the round. That natural flowing landscape, the variety of golf holes and deft bunkering all contribute to a wonderful design. It still remains one of my favorite courses as it is for many PGA Tour players (including Tiger Woods, Mark O’Meara and John Cook, et al) who have stopped there prior to the British Open.

A few years ago, Pat wrote and published a book about The European Club and how it came to be with all of its struggles and sacrifices. It’s entitled 50 Years in a Bunker—The Creation of a World Top-100 Golf Links at The European Club.  It’s on my office bookshelf and I pick it up now and again and relish re-reading some of the passages. Given some of Michigan’s (and Ireland’s!) economic troubles with its sad array of broken dreams brought about by bad business practices and excessive real estate speculation, Pat’s book has some haunting passages. To wit: “As others threw cheque books and spreadsheets at their properties, sometimes getting too deeply in debt, we did a great deal of spending but kept the costs within our capacity to cover the situation by doing most of the work ourselves and resolving to bring things along at our own financial pace,” wrote Ruddy. “With west of Ireland caution, never forgetting the observations of childhood, we stayed safely within our depth.” Love those phrases—“west of Ireland caution” and “stayed within our depth.” Oh Pat, if only these words had been heeded during the housing and golf bubbles in our respective lands.

Later Pat summed up the quintessential ingredient for a lasting links course: the land itself. “Golf is best created where the land is golfing land, where there is a demand for golf, and where drainage is positive rather than negative,” wrote Ruddy. “Golf is best when the ball does not plug to its axis and the golf shoe remains dry and clean.” The European Club met this criteria and a wonderful course resulted. But just think how many courses in Michigan, in the U.S., in Ireland and yes, now in the hyper frontier of Asia have failed this basic and earthy test.

Re-reading 50 Years in a Bunker I was captured once again by Pat’s daunting spirit and passion for the game and how it all translated into one of the world’s outstanding golf courses. In spite of the Great Recession, I imagine Pat Ruddy remaining ever hopeful and humble with life, with golf and with The European Club. In a closing passage, he added: “The constant thought has been that there are centuries of life ahead for The European Club and it will grow and grow long after one is gone.”

One Response to “Lessons of Ireland’s Pat Ruddy”