Writer’s note: Last weekend Bryson DeChambeau was in the headlines. On Saturday evening and Sunday (July 4-5) social and traditional media (most notably in a Opinion piece by Eamon Lynch posted in the Detroit Free Press) took him to the woodshed for berating a cameraman filming him at the 7th hole at Detroit GC during the third round of the Rocket Mortgage Classic. There, DeChambeau was filmed hitting a poor bunker shot, then slashing at the sand, and then missing the par save leading to a testy discussion with the cameraman. (Why is it that no one has ever berated a camera operator after making a birdie or eagle?)

After the round, he explained to the small and restricted media pool his behavior, saying he didn’t think it was fair for golfers like him to be so regularly filmed in moments of “vulnerability,” adding it can “damage our brand.”

But on Sunday evening DeChambeau was hoisting the tournament trophy and accepting the winner’s check of $1,350,000 after overpowering venerable Detroit Golf Club with his bulked up physique and turbo-charged swing speed. Of course, he can putt, too.

I excavated this piece I wrote on DeChambeau at the 2016 Masters when he was interviewed as the reigning U.S. Amateur champion, thereby earning a coveted invitation to Augusta National. —TM 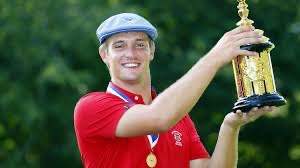 (Augusta, GA) He studies the legacy of Bobby Jones, plays with same-length clubs just like the co-founder of Augusta National, and speaks reverently about the “spirit of amateurism.” Talk about someone being warmly welcomed this week at the Masters!

He’ll turn pro after this week and already has secured seven sponsor exemptions into various Tour events this season. In his pre-tournament interview, DeChambeau was well-spoken, confident yet humble about his coveted spot at the Masters. He recalled his speech given earlier in the week at the club’s annual Amateur Dinner.

Besides his stellar game which included an NCAA Division I individual crown at Southern Methodist University last year, DeChambeau is also known for using irons of the same length and lie. It began in 2011 when he was experimenting with the one-plane swing. So along with his coach and mentor Mike Schy, he built a special set of same-length irons and wedges—all measured at 37.5 inches.

He soon discovered they were effective and complemented the intricate swing theories of Homer Kelley’s The Golfing Machine, a 1969 tome absorbed by the technical-minded DeChambeau, a physics major. Today, DeChambeau’s custom-made irons don’t have numbers on them yet they’re bestowed special names by the player. For example, his 46-degree wedge is named “Herman Keiser,” the 1946 winner of the Masters.

Coincidentally, Bobby Jones played with a set of clubs where several irons were of the same length. In fact, when Jones won his historic Grand Slam, many clubs in his set were close to or of the same length. DeChambeau had heard about this tidbit but it wasn’t confirmed until he arrived at the club this week and had breakfast in the Trophy Room.

“As I went in, I looked to the left and I saw this set of golf clubs and knew they were Mr. Jones’s because they all looked relatively the same length. It was a pretty special moment,” said DeChambeau, “because we’d always heard that story, but never verified it. When I actually got to go up to that case and look in, I went, ‘Oh my goodness, they all look really close to the same length.’” He then added: “It inspired me even more. It was gratifying to our journey.”

The journey to Augusta also included a dark and troubling time for DeChambeau. He said, “The game drove me to madness a couple of years ago, but I realized golf isn’t the ultimate thing in my life. Somebody up there is more important to me now.” Now deeply devoted to his faith, he recalls the time before his conversion as a “place that I’ll never see again.”

About DeChambeau, Mickelson said later in his press conference: “I think he’s going to have a steady climb in his career…he’s got an incredible amount of talent right now…and he’s going to continue to get better and better as he takes on his professional career next week.”

Image courtesy of the USGA