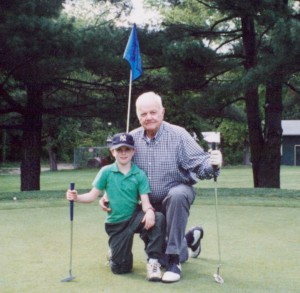 I have a file — loosely speaking — labeled “Golf Stuff.”  It’s an old, out-at-the-elbows shoebox, struggling to hold a warren of magazine clips, logo balls, tees, and ball markers.  Most particularly, though, it’s my scorecard library, wealthy with the short stories I write to myself in a hieroglyphics of numerals, dots, checks and circles.

These cards are the few culled from the many.  Some I save simply because they name the most luminous stars in golf’s galaxy: The Old Course at St. Andrews, Shinnecock Hills, The Sand Hills, Royal County Down.  Others are simply the reportage of rounds played well, outside my norms.  The shoebox holds few photos.  Most are curiosities; a foursome of strangers, me among them, lined up shoulder to shoulder, drivers at parade rest, just prior to an outing of some sort.  A picture of the lighthouse at Turnberry with me as the requisite prop.  A football team-style shot of the entire field at an alumni outing.

I have, though, one prize set of pictures, of my own making: my father and my son, each on a knee, flagstick behind them, putters in hand.  Same green, same angle as best I could manage it, three years running.  Neither boy nor man is smiling self-consciously or mugging for the camera, and so the photographs are perfect.  My father looks no older from year to year, but the boy grows broader across the shoulders and his face takes on the lineaments I recognize today.  Time did its work of slendering the baby fat in his cheeks. The resonance of the photos—why among all the golf pictures and all the family pictures I own these mean so much— is in how they capture at a glance a bond between the generations.

My father and I did not always see eye to eye.  He was a child of The Great Depression and World War II.  I come from Woodstock and Watergate.  Will’s cultural touchstones are, well, yet to be identified.  I’m sure he’ll eventually text them to me.

I can’t remember exactly when my father and I called a generational truce and began playing golf together.  I don’t think we ever did.  Or needed to.  He played, I played, we played together, it got to be fun, and then it got to be much more: it got to be time well spent.  When Will turned five or so, he began traipsing along with us.  As he got a bit older, he began to fiddle with our clubs, and then to swat his own way around. We were a threesome, three generations, and our families never gathered without our sticks in the trunk and a piece of time set aside for golf.  It became ritual.

Will was not on the golf course with us the autumn afternoon my father died.  We were playing with a friend of my father’s, and, to complete the foursome, a single we’d never met, who in the shambles of that day I would remember little of.

I recall the afternoon in snatches.  I remember that when my father fell, the abandonment of every effort to remain upright was instantaneous and complete.  I remember other golfers rushing over to help.  I remember how long, how horribly long, it seemed to me, it took for the ambulance to wail its arrival and complete its hopeless careening across fairways and along service roads.  I remember the shirt being cut away, the paddles, the ride to the hospital.  I remember thinking, incongruously, that I would never again see my father apply his flaring whip of a signature.  I remember arriving home and saying to the boy, who was standing alone in the center hall’s late-day shadows, “Will, he’s gone.”

That happened in October, when the weather here in the Northeast restlessly shakes away the green of summer and begins to grow its winter teeth. The end of the golf season often comes abruptly.  Sometimes the weather runs fine one week, and the next bears no resemblance to it.  The marsh grasses grow brittle and chatter in a new, cutting wind, the clouds trade their ivory billows for a look sleek and steely gray, and the season is over.  That was one of those years.

Over the long, slow-moving months of winter, I wondered if I could ever play there again.  The question was complicated by affection: as a writer, my first big golf feature had been written about that course.  And as a player, it had fascinated me from the start.  Working along the breezy hilltop breast of treeless farmland gone fallow years ago, the architect had fashioned a weathery, links-like layout, bunkered it ingeniously, and created a puzzle that I grew to appreciate more the more I played it.

Its future in my life seemed to offer no middle ground: to play was either sacrament or sacrilege.

In early April, when the desire to play trumps good sense, I decided I had to go back.  It happened that I played alone my first time out.  When I arrived at the sixth tee I stood in the box an extra few moments, waiting for something.  I don’t know what.  A transformation. A shot of insight.  Enlightenment.  But everything was adamantly unchanged: I could easily see the short line of old crabapples, the tail of the service road, and further out, flapping as if to draw my attention away from it all, the blue flag.  That was all.  I hit, played the hole in the humming quiet of the breeze, and moved on.

It was not until full summer that I got out with Will.  We’d never played there before; the forced carries and many bunkers were simply more than he could have handled when he was younger.  But he had grown, and even without playing much he’d developed a swing that could get him where he needed to go.  When we got to six tee I told him that was the hole on which his grandfather had died.  He nodded, nothing more, and together we looked down the fairway.  Another season had brought along another world: the fescue was running thick and blond along the fairway borders.  The turf was intensely green.  In the crease of a marshy wetland, redwing blackbirds squatted on wavering cattails and darning needles drew silver streaks across the air.

Will and I have always had a deal.  If we walk, I take care of the grill; we ride and he’s on his own nickel afterwards.  We had walked that day, and so I was cleaning my shoes and hunting up my billfold preparatory to going inside when someone approached me, excused himself, and said that while he wasn’t sure, he thought he had played with me once.  I said it was possible; I often started off alone and picked up partners along the way.

He hesitated a long moment and said: “Did your father have a heart attack on this course last year?”

I stuffed the scorecard and the pencil into my pocket and put out my hand.  “You were our single.”

“I wasn’t sure I had you right,” he said.  “I didn’t want to, you know, ask.  And be wrong, or out of line with it.  It’s not my business.  But I remembered your clubs — Hogans — because not many people play them, and that made me pretty much sure.”

“No,” I said, “I’ve always felt it was your business.  And I’ve always felt bad for you.  You didn’t sign up for what you got that afternoon.  Don’t get me wrong on this — it’s just something I wonder about when I put myself in your place.  Did you finish the round?”

He hesitated again.  Then he said:  “Funny thing.  You know, it just seemed to be such a big decision.  My clubs were sitting right where I dropped them.  The ball was lying on the green.  You were all gone.  Everything was weirdly normal.  I was going to walk off.  And then I changed my mind.  I finished the round.  I didn’t really play it.  I kind of marched through it.  Eighteen was like a finish line.”

I said: “I’ve always hoped you did.  It’s strange.  Where else do you have someone die in the middle of what you’re doing, and then go back to what you were doing once the hubbub is over?  And have it be the right thing to do.  Just a strange game.”

I said nothing more out loud, but I knew that like our single, I too had finished that October round.  It just took me longer.  Until a day when my son and I, walking that golf course, together affirmed that the generations prepare to hand down the things they need to hand down not though formal ceremonies, but simply by completing what needs to be completed.  And so a day I wouldn’t wish on anyone moved golf a shade closer to the heart of life.  My time playing with Will is more prized.  He’s got a little brother coming along, and I look forward to that.  When I play alone, roaming around the immense, undisciplined beauty of the old farmland, I commune with the old man’s spirit.  It’s all good.

So the shoebox fattened.  A course you’ve never heard of.  Numbers that wouldn’t turn your head.  But there is more than one way to keep score, and because there is, that summer afternoon’s card is one that I am keeping.

TheAPosition say that keeping score easier when you use a golf course directory.