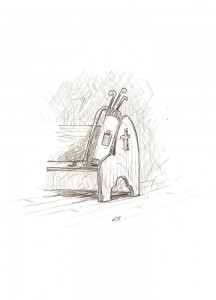 Assaulting Everest is one thing, but scaling it without oxygen is quite another.  Trout fishing is a fine art under any circumstances, but seeking cagey fish with daringly light line and bait made of feathers and thread makes it that much more challenging.

For the golfer, assembling a solid round is hard and rewarding work.  Doing so with a handful of clubs rather than the legal maximum of 14 is harder still, more rewarding yet.  Which brings us, as you’ve no doubt already guessed, to the Sunday Bag.  Better called a sleeve than a bag, good for holding six or so clubs, Sunday Bag-style golf puts a premium on creativity and imagination.  Can you punch a 5-iron distances normally the province of your 6- or 7-iron?  Handle chipping duties with an 8-iron?  Be content to play out in front of a green, planning your finishing spot for right where you open up your best angle at an up and down?  Flake a nine wide open because the lob wedge is spending the day in the trunk?

I bought my Sunday Bag used — as far as I knew, the only way you could find one.  A fin, demanded the Maine man in whose barn cum curio shop I found it, and a fin he got.  It was in nearly perfect condition.  Not a scintilla of mildew mottled its white duck body.  The carrying strap and leather finishings — collar and base — were as securely stitched to the body of the bag as they were the day they were sewn.  The trimmings?  A pocket for tees and extra golf balls.  Three of them.  Four, if you want to push things with the zipper.

It was good, I thought, to make my discovery in Maine, a place of few words, since it would make me a man of few clubs.  The simplicity appealed, too.  If Henry David Thoreau had played golf, he would have played out of a Sunday Bag.  Thoreau would have understood the vagaries of golf, and the eccentricities of golfers, better than most anyone.

The quirkiness of golfers is typified by the quiet man at my golf course who has taken the idea of fooling with golf bag assumptions still further, and removed his carrying strap.  He slips out on early summer evenings, always alone, carrying the bag by the handle, like a valise, and vanishes into the gloaming’s slow dissolve.  He is indeed regarded as quirky, or worse, but I think the philosopher-writer who dwelled for awhile at Walden Pond would have felt himself a kindred spirit with our member, who was, after all, simply moving to the cadence of his own drummer.

You can buy a Sunday Bag new.  Sixty, seventy bucks, name-brand.  I was pleased to see that, and a bit surprised, because there is something archaic about them, something a bit plus-fours and argyle stockings, maybe because not much of the golf industry’s advertising is about the idea of less, or fewer.  But before there were polarized sunglasses and smash factors, there were days, not mere days, but perfect summery confections of cobalt and cumulus, that begged for a walk on the golf course with a tool kit as light as your spirits.

And there still are.

2 Responses to “The Sunday Bag”