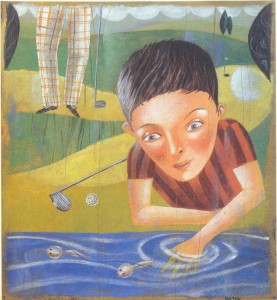 As seven-year olds go, my son Will is pretty small, so he fights the weight of the clubhead more than I would like to see.  But his swing proves that if you set up well and return the club to the ball in the start position, it’s going to work out.  He hangs on, nicely balanced, head behind the ball.

“Good.” He says he’d like to go nine today, and advises me that the pro shop has candy in the cold box.  That’s good: the pro likes to watch him eat chocolate muffins the size of softballs.  There’s a gambit here, too: nine holes for Dad (Will sometimes wants to quit after fewer — don’t we all?)  A Snickers bar for Will.  It’s a serious offer.

On the fourth, he’s got to fly a small pond off the tee.  Last year he hit from the forward tee, a green thumb thrust into the water.  Wedge was sufficient to carry the 50 or so yards to the other side.  Now he sets up on the men’s tee and goes after it with the driver.  Today he gets it a little off the toe.  Wet.  We search, less for the ball than the curiousities that abound wherever water meets land.  No ball, but a power of tadpoles zigzag to safety, and we spot a muskrat, its mouth full of bright green grass, gliding across the pond.

The tadpole frenzy, the swimmer, the life of the pond, are straight out of his science books.  He is riveted.  This, I realize, is better than a great shot.  He’s oblivious to so much of what plagues me.  The scoring, the cranky hostility of my body to repeatable movement, the bouts of frustration.  He’s attentive to so much I take for granted: the muskrat, bluebird houses standing sentinel in open spaces through the course.  The workings of ball washers.

On our next-to-last hole I stop to watch him.  Will is becoming a golfer.  I suspect there will be a long arc of fascinations between this late afternoon and the time when the game grabs him for its own.  Baseball, girls, cars, college, friends who don’t play.  A period of determining everything I enjoy and not doing it.  At least that’s how I handled things.  But today his stride up the fairway is steady, the small bag hangs properly across the small of his back, and there is plenty of bounce in his step.

Golf at its best is a child’s game.  Pros teach us our swings, but we should watch our children if we really wish to learn about the heart of the attraction.  Golf is about unexpected ecstasies, something children are uniquely available for.

I had no hole in one today, no run of birdies.  But Will is bursting.  Those tadpoles, he knows, are on their way to becoming frogs.  Imagine.  The muskrat is building a nest with that grass.  It’s all connecting for him.  I know what he’ll tell his mother tonight: the life in the pond was the life he’d seen only in picture books before.  A perfect moment for him, and the feeling that I was lucky, too, lucky enough to chance upon my child aglitter with pleasure in his world.

One Response to “Of Tadpoles and Ball Washers”