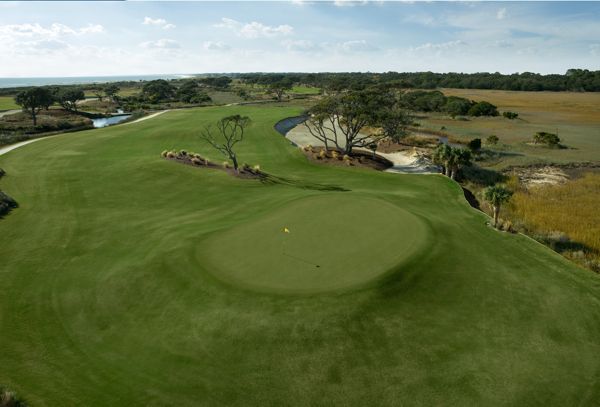 How formidable a challenge is the Ocean Course at Kiawah Island, South Carolina?  Mike Vegis, the resort’s public relations director, and my host, puts it succinctly: “Yikes.”

There are golf courses, and then there are great golf courses, the outsized affairs that provoke our awe.  The Ocean Course is like that: unendingly beautiful to look at, impeccably handled in design and execution, and impossible to play.  Feel the love?  Nope.

That’s me and Pete Dye, when it comes to designing golf courses.  He’s a giant.  But no love.  Dye himself hides a bit behind a gruff exterior, but you won’t come across a nicer man, a more provocative golf mind, or an architect who believes more vehemently that designing golf courses is a good deal more simple than it’s made out to be.  Some of the most notable minimalists around these days — Tom Doak to name one — started their careers with Pete Dye.

The Ocean layout is no secret: best-known as the site of the 1991 Ryder Cup matches, it will host the PGA Championship in 2012, and for what it’s worth, you’ll find it on most every list of the best 100 golf courses in the world.  Running tight to a brilliantly white strand of South Carolina’s Atlantic beachfront and rolling dunes for much of its route, The Ocean Course is minimally manicured, loaded with hazards, and almost invariably windy.  Its somewhat links-like routing (it doubles up on conventional links structure by going out and back to the clubhouse on both nines) assures that the golfer will contend with those winds, which commonly blow at anywhere from 10 to 40 MPH, from a variety of angles.

I played it twice, both times with the surf roaring in my ears and a wind stiff enough to blow sand out of the bunkers playing with my mind, and finished with the sense that in benign conditions it would be a roller coaster ride, and that in the wind, I’ll never play anything more difficult.

On that score, let us take for our text the hole pictured above.  The third.  A mild dogleg, playing directly at the Atlantic off the tee, into the prevailing wind, with ominous-looking marsh, that alligator soup, fronting the teebox.  And that strip of sand running just about the length of the left side, which is set well below the fairway?  In local argot, a “transition area.” Its floor is reached by ladders, about ten steps worth.  From that depth, there is nothing in view when you hit out except the embankment you darn well better clear.  The good news?  A transition area is not a hazard!  You get to ground your club!  Changes everything!

Now look at that green — never mind the tree/rock thing in front of it.  In Dye’s constellation of tortures, that’s mere piffle.  From above, the green looks like a green Hershey’s kiss with the top third shaved off flat. No bunkers.  Simple, if small.  Notice the thick, golf ball-stopping collar?  Can’t see it?  That’s because there isn’t one.  Now think about how hard that whole construct is, and then factor in the drying capacity of the wind.  And consider the speed of the greens, which Vegis told me they like to keep at about tournament speed: 11 or a little better on the Stimpmeter.  Approaches both long and short absolutely flee this slickest of summits.  A problem Vegis, who has played the Ocean Course many times, copes with by using his putter once he gets near the base of a crowned green.  Think of the green as a commuter does about the morning train:  it’s not about getting close, it’s about getting on.

One way to sum up the character of the course is to say that from the many tee shots requiring forced carries, to the shortest of oh-so-fast putts, the Ocean Course is ready to pounce.  Another way to look at it is to say that there’s almost no opportunity to hit some loose shots and still coax pars from the course.  No scrambling allowed.  And as a loose shot hitter, I freely admit I am sensitive to this.  I remember hitting an approach at Dye’s Blackwolf Run course outside Sheboygan, Wisconsin, have it miss the green by ever so little — a foot or three — and bound off one of those railroad ties into the water.  No up and down possibilities for that fractionally errant shot.

As far as the Ocean Course goes, the best advice I can give is to leave your ego behind.  Before you ever peg the ball up, move one tee box ahead of the one you normally use.  You’ll have more fun.  If the wind is up, and you haven’t already moved up about as far as the boxes allow, move up yet another.  (Many holes have six choices.)  And take a caddie.  For moral support if nothing else.

The Kiawah resort includes four other golf courses, all of which treat the golfer with considerably more kindness than does the Ocean.  Of these, the best might be the Nicklaus-designed Turtle Point, which plays primarily inland, but finds its way out to the dunes for three holes late in the round, including the 14th, a short par-3 with a small, tightly-trapped green tucked into the far end of a tunnel-shaped run of sea grasses.

The property’s hotel, built seven years ago, is called The Sanctuary.  It’s a Southern-style beauty, evoking an earlier time with its large, high-ceilinged lobby, curling stairways, and interior columns.   The amenities are what one would expect of a five-star hotel: spa, fitness center, three restaurants (one outdoors), indoor and outdoor swimming pools (one heated), conference facilities, retail shops.  I never had a question the staff person I went to—whatever his or her specialty might be—couldn’t handle without needing to ask anyone else, and when my Luddite thumbs got in the way of setting my rental car’s GPS unit correctly, one of the bellmen took the task on as a personal (and successful) mission.  Southern pace, southern grace, inform the resort.  If that’s for you, try, while in the area, to explore nearby Charleston, one of America’s most beautiful and lively small cities.

At the last, great golf courses, like the Ocean Course, have a feeling of inevitability about them.  Of course, we think, that was the right place to set that green, and of course the rhythm of the holes was preordained.  But it never is.  Dye’s original concept for the Ocean Course had it somewhat further inland than it is.  His wife, Alice, goes the story, suggested that shifting the entire course tighter to the beach would make it truly memorable, and so that change was made.  One measure of a golf course is how successful it is in capturing the essence of its surroundings.  Rugged, wind-scoured, intimately connected to the sea, the Ocean Course is wholly successful in translating its geography into the language of golf.  Alice Dye, a fine competition-level player in her own right, wins at least some of the plaudits for that.

But I’m leaving her out of my own personal war with her husband.  Only one evil genius to a family.