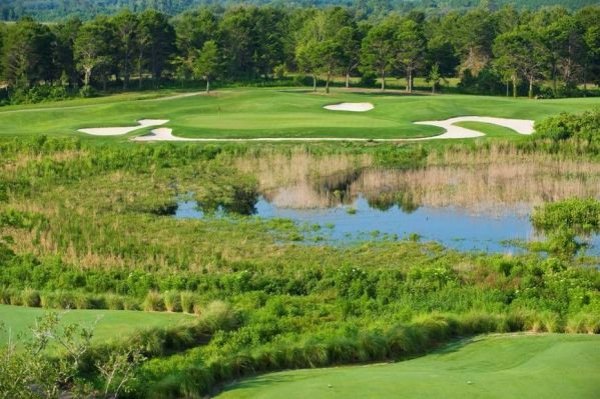 Crooked Cat’s par-3 13th is not the place to lay the sod over the ball.

Of the two courses at Orange Country National, Crooked Cat has more appeal to me than Panther Lake. Both courses are built in former citrus groves west of Orlando over nice natural topography and very little tree cover. The soil is arid and sandy and with no development anywhere near it lends a rustic, country aura to the entire establishment. Crooked Cat does a better job of playing to these strengths.

The architecture is less polished—that is, shaped—than its neighbor’s (which might explain why most people prefer the other course) so there’s a little more natural rumble and roll through the fairways. It actually could blend into the environment even better than it does because there’s still a modest manufactured feel to its features and tie-ins. I think if it were built today amid the popularity of so many “old”-looking new courses those features would have been roughed out even more. It’s easy to envision the edges of the bunkers, for instance, as choppy and eroded rather than straight cut. The clean and circular shapes tend to work against the open vistas and otherwise rugged feel of the land.

The routing gets off to a good start on a par five that presents a phalanx of bunkers crossing your line of sight with no clear indication of where the fairway is. From there the holes basically tumble nicely through an open landscape spotted with long grasses, hollows and a randomly assorted bunkers. 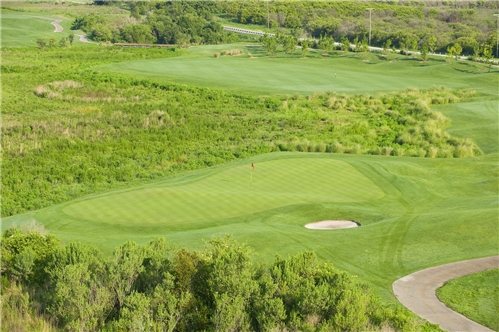 A good look at the challenging 12th.

The par four 12th is a beast. The deep, narrow green slants right over a sunken wetland. Tee shots down the right side, hugging the edge of the hazard, get a clear look at it and a shorter approach, but getting to this position also demands a longer, flirtatious carry over the wetlands from the tee.

Later, a cross ridge is employed usefully to lengthen uphill tee shots at 14 and 16 while at the same time shortening the downhill 235-yard 15th. Pretty good stuff, overall. (88)