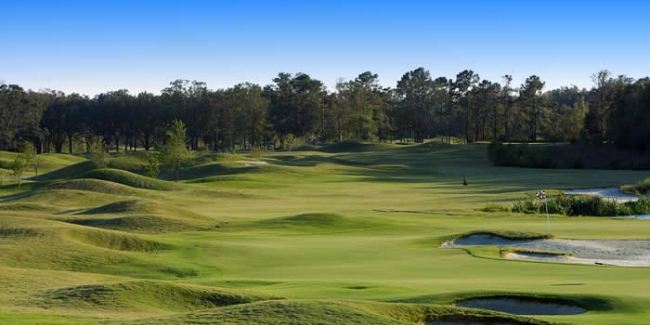 The perimeter mounding and double green are out of style for a course built in 2006, but The Atchafalaya isn’t shy about anything.

I admire what the architects did with this course. I believe if you’re stuck with a crap property and have to manufacture everything from the ground up, go ahead and turn the design loose.

The Atchafalaya at Idlewild is a little severe and anachronistic for when it was built—the perimeter mounds,a double green, bulkheads lining water hazards and pot bunkers are straight 1988—but there’s no way to make this place look soft and old and heathery unless you’ve got an extra $10 or $20 million. There’s a reason why Coore and Crenshaw are so particular about the sites they work–they wouldn’t touch this with your bulldozer.

The property is shoehorned lengthwise between two dense bayous and a city park on the north on some of the only arable land in the immediate vicinity (it was formerly planted to…cotton? Soybeans? Sugarcane? I can’t remember). I’m told there are 175 acres underfoot but I’d be surprised if there are more than 125, and there isn’t much more than a foot of elevation change across most the site.

The design, especially the first nine holes, is as dark and murky as the surrounding Atchafalaya Basin, a massive swamp wilderness roughly 20 by 150 miles long vivisected by lakes, marshes, levees, canals, bayous, deltas, Cajuns, alligators, blood-sucking animals and of course the deep and brooding Atchafalaya River. This part of southern Louisiana is engaged in a perpetual war between the forces of an eerie, inhospitable nature and man’s attempts to engineer his way through it.

That pretty much describes the golf, too—lakes, wetlands, forests of cypress and snakes versus rippled, heavily engineered holes, big built-up greens with in your face contour (check out the horseshoe contours at the long par-3 7th) and raised moguls in between holes for protection and insulation.

The routing has some cramped spots like the tremendously awkward double dogleg par-5 13th where a well-struck, semi-blind drive has equal chance of drifting into a retention pond as it does leaving a mid-iron second shot into the green. The 6th, another par-5 that jerks quickly right then left around trees, isn’t much better.

But overall the layout maximizes every available square foot as the 7,500 yard championship tees and 77.6 rating attest. Atchafalaya is not a course for the meek, but neither is this part of the world. It’s a good fit. (86)

The Atchafalaya at Idlewild 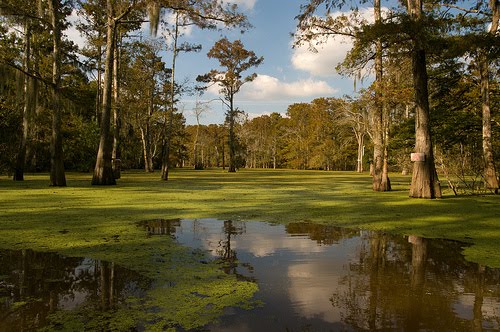 The Atchafalaya Basin is one of the most stunning, haunting places in America.