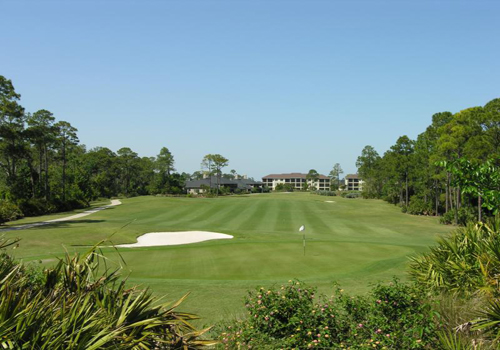 A representative look back at Grand Haven’s first.

The two-shot holes are probably the strength of Grand Haven, a moderately high-end daily fee located in Palm Coast on Florida’s Atlantic side. A couple of bruisers measure over 460 yards, and most of the ones in the 340 to 380 range are classically Nicklausian, meaning they’re strategically sensible if not particularly creative.

One of the tougher ones is the 436-yard third that calls for a big cut drive over a marsh followed with a draw iron over bunkers, unless you’re one of those people who drives it 320–then it’s just a straight flip wedge in. Oh well.

The other Nicklausian trick here is the setting of almost all the greens axes at roughly 45-degree angles behind deep bunker complexes, so you have to be pretty brave to get the ball all the way to back pins. Up to this point we’re used to Nicklaus designing courses with the “A” player’s eye for position and reward, but there are signs creeping in at Grand Haven of a softening of style that would become much more developed two years later a mile or so up the road at the Ocean Course at Hammock Beach Resort (formerly Ocean Hammock).

If you can summarize this style’s evolution it’s a rounding down of the features and a more sculpted look around greens. The par-4 4th bleeds right into a large shaved chipping area, something I don’t remember seeing from this design team before. And dare I say it—the little bump that is the putting surface at the pretty par-3 14th sitting in an oak grove is really quite sexy, a cruder precursor to work Team Nicklaus did later at courses like May River near Hilton Head. 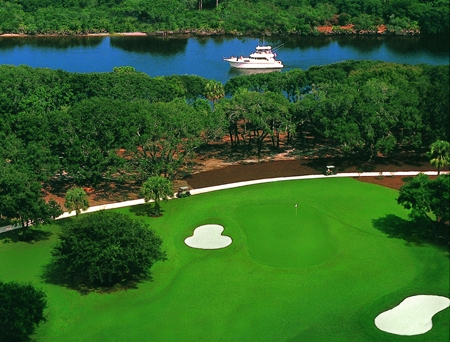 The 18th, with the Fox Cut channel beyond.

Each nine stretches out and back in opposite directions along what’s called the Fox Cut channel of the Intracoastal Waterway, but most of the holes sit away from it, down amid the oaks and hammocks and undergrowth and strips of random wetlands. But despite some nice green complexes there’s nothing very special happening here (and please let’s not talk about the island green 8th). Nevertheless, sometimes underexposed, not-overwrought Nicklaus-haus courses such as this can be just as satisfying than the large-scale signature productions (86).