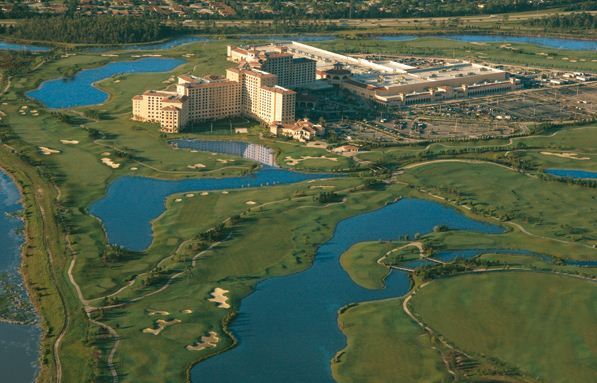 Shingle Creek was built from scratch in a wetlands basin that feeds into the Everglades.

Shingle Creek in south-central Orlando sits at the north end of the same basin of wetlands as Greg Norman’s Grande Lakes less than two miles south. Their proximity and similar starting points make for an interesting comparison.

Built at the same time, the indigenous sites were almost indistinguishable. Most of the region’s water drains into this area before feeding down into the Everglades, and both properties were flat, wet, murky, vegetated and wholly unattractive for good golf. Retention lakes buffer the majority of holes, and though neither course has any housing on it they’re shadowed by oversized hotel complexes.

For all that, the golf courses couldn’t be more different.

Chalk it up to budget, but also vision. Grande Lakes, with the backing of the Ritz-Carlton/J.W. Marriott brands, blends almost entirely into the secluded environment, the holes cut individually from the wetland forests. The clean-shave shaping and wide corridors adds a sophisticated, mellowing touch.

Shingle Creek, developed by Orlando-based hotelier Harris Rosen, is much more ad hoc and busy with rolling mounds and views spanning across the property. It circles through a chain of lakes surrounding the resort on a piece of land that was stripped, drained and capped. In other words there wasn’t a lot of nature remaining to incorporate, nor did there seem to be money leftover to manufacture any kind of environment around the edges. The entire course could be airlifted and dropped just about anywhere and it would read the same.

The architect, David Harman, who died in 2005, is best known around these parts for the 36-holes he built for instructor Phil Ritson at Orange County National, a popular and respected public outlet west of Orlando. Working out of central Florida, Harman designed a number of other courses in the area as well, though ironically his legacy will be Kauri Cliffs, a jewel on the stunning oceanside cliff tops of New Zealand half a world away.

It’s unclear why this fronting bunker on the par-3 14th had to be so large and busily shaped. Oh wait, eye candy for passersby on Universal Blvd!

Given that Harman’s only avenue of expression at Shingle Creek was through his shaping you can kind of see where he was going. Amid all the mounding the holes have pointedly elevated, sectioned greens and sunken bunkers with most of the openings choked off. That means a powerful Florida-style aerial game is needed to get to them, and if you can’t pull it off there aren’t a lot of options around the greens. Plus, though the fairways are ample, you can hit it in the water on 16 holes. It’s a muscular and manufactured if redundant presentation, kind of like Pete Dye without the interesting parts. That’s something at least.

But if the canvas is blank and you have to build something from scratch, is this really the most engaging outcome for a central Florida resort course? That’s not a rhetorical question–the answer is no. The design is not nearly distinctive or thought-provoking enough to make a deep impression. There are ways to make a place like Shingle Creek both more interesting and authentic, they just chose not to use old tropes.

It’s the age-old lesson retold: If you can’t have great land, have a great budget. If you don’t have great land or a great budget, you’d better have a strong point of view. If you’ve got none of the three the best you can probably hope for is something like Shingle Creek, a functional but ultimately unmemorable course. It could be worse, but it could be a whole lot better. (83)