The village and the golf course at Lahinch are virtually contiguous.*

What makes one golf course adored, and another merely respected or admired?

As with all such matters of the heart, definitions defy description. You might be able calculate why one course makes you think or another instills terror, or how another amazed because of a beautiful shoreline or other particular or peculiar features.

But for those that simply make you flutter and smile? Love is ineffable.

To better try and understand this phenomenon we look to Irish golf. Here we can find common, reasoned ground in assessing the thrill and grandeur of Country Down, for instance, which is universally spoken of with studied reverence. Portrush and Portmarnock are admired for their views, seductiveness and fortitude. Old Head is visually stunning but, in analysis, too dim in its arrangements, and Ballybunion may have the greatest balance of beauty, brains, excitement and brawn.

Among them all, however, Lahinch, in County Clare on Ireland’s west coast, remains enigmatic. It’s links are widely admired but also uniquely beloved, nestled deeply into the high, shaggy dunes abutting the battering surf of Liscannor Bay, offering the entrancing and rare mixture of community, scenery, length, danger, mystery, verticality and, perhaps most importantly to its personality, quirk.

These heroic dunes, second probably only to Ballybunion in height and severity, cloak the holes and particularly the greens, and in the process create a number of blind shots that both infuriate and fascinate.

Namely among these are the Klondyke and Dell holes, two of the most whimsical and famous holes in golf. Klondyke, the fourth hole, is a slender but reachable par five that flows through a deep valley before stopping abruptly at a high dune. What’s this? Your caddy will instruct you to hit over the top of the dune and give you your line; on the other side waits a large green sitting in an open field of fescue. The Klondyke is the rounded dune at the center-left of the photo–the green is on the other side.

The next hole is the Dell, just a short iron or wedge shot for most, but there’s no green visible from the tee. You hit at the directional rock atop the steep dune right in front of you, then walk through a gap to see where your ball came to rest on the shallow green, enclosed on three sides, that tends to collect everything to the putting surface. The caddies who look on from higher ground to watch shots come in—and also serve as traffic cops for players on the 18th tee that plays across both the Dell and Klondyke approach areas—have been known to mischievously deposit players’ balls in the hole while they walk toward the Dell.

Holes three through thirteen comprise one of the best runs in Ireland, with each hole coursing through, around and over the most severe of the dunes. The greens at three, six, seven, eight and eleven are all nestled into the sand hills directly above or within near sight of the ocean. Thirteen, the author’s favorite hole, is a 279-yard par four that plays to a green with dizzying slope and a ferocious, wooly depression that swallows up any drive hit to the right.

The action sags a bit once you come out of the major dunes for good at 14, but the let down is understandable. After all, you’ve just left behind some of the most imaginative, intimidating and beguiling holes you’ll ever play.

Curiously, when Lahinch’s links here were first formed in 1892 by Scottish military men, most of the holes were laid across the more level pastures surrounding the inland road, well away from the trademark dunes. In 1894 the club hired Old Tom Morris of St. Andrews to revamp the holes, and the master moved much of the course to the higher, wilder ground creating among other holes the original versions of the Klondyke and Dell.

Later, Westward Ho! professional George Gibson formed several new holes nearer the sea, but it wasn’t until 1927 when Alister MacKenzie came to town that Lahinch Golf Club became what it is today.

MacKenzie rebuilt and rerouted major sections of the course, much of it farther out amid the most vertiginous dunes along the bay. He enlarged and imbued new putting surfaces with more severe slope than they had known and also added more confrontational bunkers.

By 1998, the course had suffered wear and deterioration as well as random modifications. Greens had shrunken and become flat, and the best attributes of the rolling and depressed land were not being taken advantage of.

The club hired British architect Martin Hawtree to restore the MacKenzie character, beginning with the greens. With no precise records or blueprints to draw from, Hawtree attempted to imagine what MacKenzie would have done if hired for the same job. The revised par four 6th is one of the most stunning–and dangerous–on the course.

All work was completed by 2003, and the redone greens—enlarged, several of them readjusted in placement, and all imbued with new ripples and roll-offs—certainly seem MacKenzie-esque and provide the course a robust modern-retro look and difficulty. Both putting and chipping around them require a level of both touch and creativity on par with any course in Ireland.

Additionally, and in keeping with the Morris and MacKenzie modus operandi, several holes were discarded and others built in their place, including two new par threes out in the high dunes at eight and eleven that showcase remarkable views of the Atlantic Ocean and abuse any off-line shot.

The new Hawtree redesign has given Lahinch its backbone back. In strong winds the course demands every bit of shot-making and creativity you have both through the air and along the ground. New greens like three and six, which fall away at different approaches, are both stunning to behold and borderline extreme.

One reason players, particularly American players, find links courses irresistible is that they braid golf, society and everyday town life so intricately. Few of them do it as fetchingly as Lahinch.

Its irresistibility comes in part, of course, from the golf holes and the dunes, but equally from the totality of the Lahinch environment.

The churches, shops and homes of this charming village of roughly 700 people sit on the south side of the golf courses separated only by a low stone wall (the newer, shorter Castle Course lies to the east of the Old Course across R478). After holing out on either 18, the retired player, if he chooses, can cross the road and be pulling up to a pub or hotel bar in a mere matter paces. He may even leave his bag, assuming he’s carried it here, as many do, on the stoop

Golf is woven permanently into the fabric of Lahinch. No one’s life here is not touched in some way by the rollicking links, no one’s ancestry lacking in the language of golf. Golf—and surfing, to a lesser extent—provides the cultural context of the region, the dialect and the point of view. The combination of world-class golf and such organic, intrinsic acceptance of it is, indeed, irresistible. 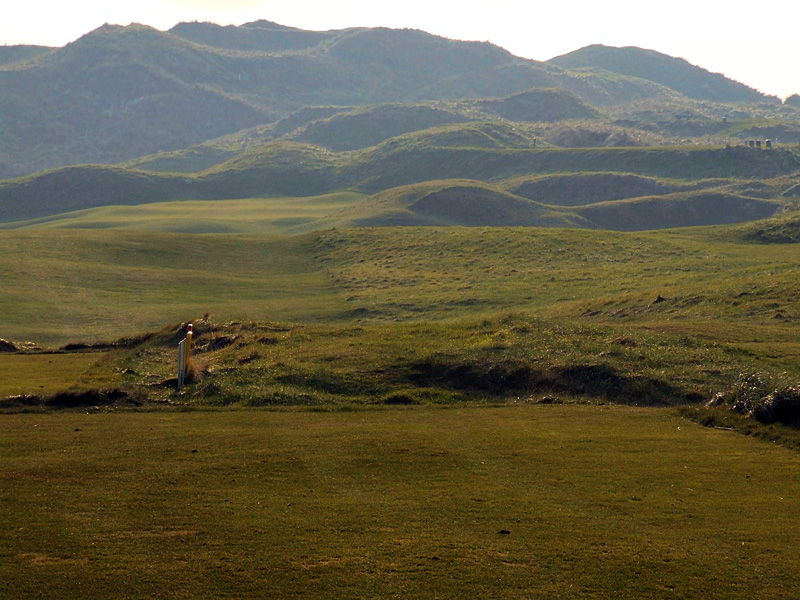 The drivable par four 13th with Lahinch’s unmistakable dunes towers at the heart of the course beyond.

America has no equivalency. As democratic as we occasionally try to make the game (which is not often enough, and which historically becomes less attempted), we generally do a poor job. It never fully integrates into our own towns or society. It instinctively gravitates toward the provocative, toward commodity, toward the private, toward the few.

While the fees at Lahinch have crept higher and higher alongside the club’s reputation and demand, with fees range from €100 to €125 (roughly $125 to $175, depending on the exchange), even that can’t scrub away the honest, provincial charm of this seaside golf village. Lahinch is golf, pure and simple.

So yes, it remains an elusive target to quantify, but we do know that Lahinch is loved in ways other Irish courses aren’t, with our hearts and guts as much as our heads. Bernard Darwin, the great British golf writers, parlayed the sentiment best when recalling what an amateur English player told him of Lahinch: “It may not be the best golf in the world, but it was the golf he liked best to play.” (96)

Lahinch is roughly an hour drive west of Shannon Airport, the most convenient point of arrival. Dublin is just over three hours to the east.

The first choice for lodging is the Vaughan Lodge Hotel (353 065 708 1111; vaughanlodge.ie), just south of the golf course on Ennistymon Road. Opened in 2005, the lodge is perfect for traveling players, with 22 modern rooms (you won’t be spending much time in them other than to sleep) and a fine seafood restaurant on premises.

There is also a wide assortment of family-run bed and breakfasts in and around Lahinch, as well as several quality inns like the upscale Moy House (353 065 708 2800; moyhouse.com). 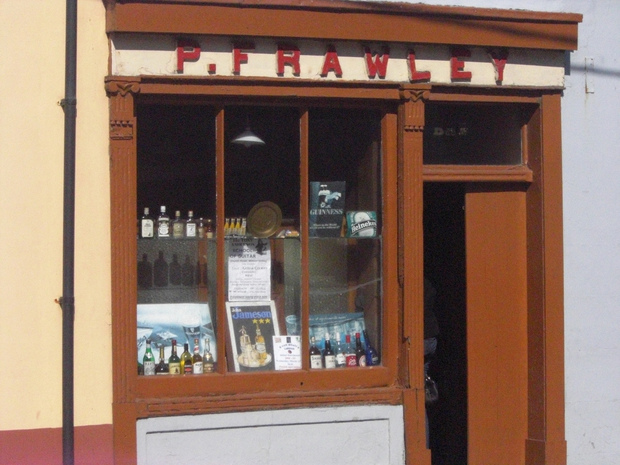 The laid-back Kenny’s Bar on the main stretch, a block from the golf course, is your first stop for a Guinness. From there proceed up to Kettle Street for a uniquely Lahinch experience at Frawley’s Bar, where proprietor Tom Frawley has been singing and pulling the bar’s single Guinness draught for over 80 years.