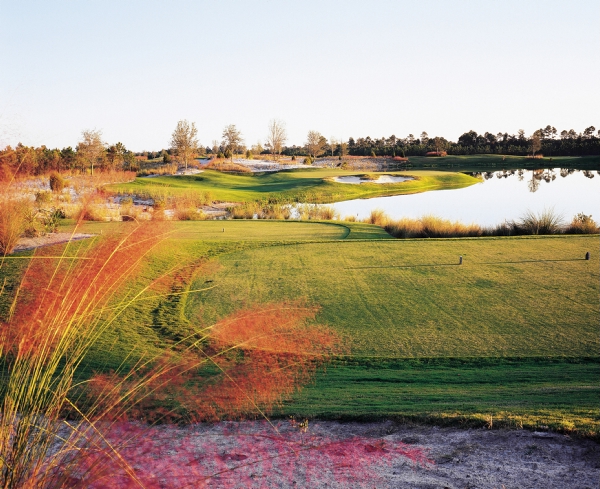 Given the varieties of budget, location, sites, clients, temperament and eras, it’s fair to debate which golf courses are among a great architect’s best, especially one who has built dozens or hundreds of them. Some debates are relatively short–Augusta National, Cypress Point and Royal Melbourne would make almost everyone’s list of best MacKenzie courses; same for Pacific Dunes, Old Macdonald, Ballyneal and Barnbougle Dunes for Tom Doak–and the question is really how to identify number one.

For others, a top three, or five, is going to be different for everyone. Tom Fazio falls into this category. For years, Fazio’s list started with Shadow Creek outside of Las Vegas–and then there was everything else. And even that notoriety was as much for the engineering achievement–turning parched, flat desert into a rolling, lush, forested golf course at a cost of 40 million (1989) dollars–as for the golf itself.

After Shadow Creek, bigger doors and pocketbooks opened for Fazio. Almost every course he created for the next decade and a half was a mini-event attracting voluminous raves and cargo loads of raters. Those designs–big budget, mouthwateringly photogenic, usually private–often found their way into the upper realms of various Top 100 lists…only to begin a slow slide backwards until they (usually) disappeared.

That wasn’t Fazio’s fault–raters can be fickle, but he wouldn’t trade them. They helped burnish his reputation as the world’s top architect and made future clients dream of seeing their courses in the rankings too. But the transient nature of his designs–that is, how they’re perceived by panelists, historians and other golf literati–beckons the question: which ones will stand the test of time? And do they sacrifice timelessness for timeliness?

Opinions are divided. Golf Digest loves Fazio. He charts 16 courses on their Top 100 list. The highest rated, Wade Hampton, stands at no. 25 and is followed immediately by Shadow Creek, The Alotian Club (which has already fallen from its high spot at no. 14) and Gozzer Ranch. The top Fazio course on Golf Magazine‘s list, on the other hand, doesn’t show up until no. 52 (Wade Hampton) followed by only three others–The Alotian didn’t make the cut.

One way to interpret this is that Fazio has created many great golf courses but few exceptional ones. If places that currently fill out Golf Digest’s list like Dallas National, The Quarry at La Quinta, The Preserve (CA), Diamond Creek (NC) and Flint Hills National (NC), to randomly pick several, are still on the list in 20 years it will likely be because almost no one is building new golf courses anymore. If domestic construction picks up again, it’s a good bet these and other Fazio designs will fade from the rankings.

Though there’s no consensus on Fazio’s best work, one course that’s rarely in the discussion is Camp Creek, near Panama City Beach in northwest Florida. That’s a mistake, though an understandable one. 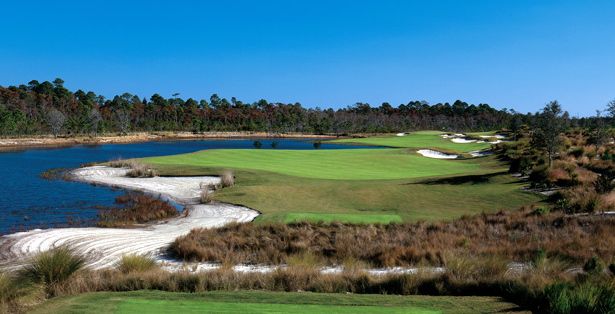 The bunkers, tall grass and sloping embankment on the right of the par-5 3rd, especially on the second shot, force shots uncomfortably toward the water.

Fazio’s success invites a chicken-or-egg presupposition: does he get good sites and great budgets because his courses earn accolades and acclaim? Or do his courses earn accolades and acclaim due his ability to draw big budgets and create stirring landscapes? Either way his best courses are so visually inviting in a classic artistic sense that they’re vulnerable to the criticism of being more aesthetic than substantive. That plus the fact they slide up and down the ranking lists makes one wonder if they’re too often judged on the wrong merits.

Camp Creek deserves praise for the golf, not just the presentation. The property is no dog, exactly, but it’s lack of elevation change and any significant land or hardwood features mean the emphasis had to be placed on the golf. The holes are built, no doubt, but they blend in well to the sandy, unspoiled (pure golf) site cluttered with low growth pine and scrub oak. Fazio’s budget here was healthy enough to create a lot of internal contour and contrast between planted grasses and bunker variations, but it wasn’t big enough to turn the entire site upside down. The “limitations” turned into advantages.

Camp Creek is located less than 400 yards from the Gulf of Mexico at its nearest point, but aside from persistent seasonal winds it doesn’t play like a course so near the sea. It’s target golf that rewards strategic tact with an emphasis on correct angles and distance control into greens that rate among the most original and highly contoured in the Fazio oeuvre. The first two holes are tremendous short par-4’s with option-laden drives and delicate approaches into elevated, nervous greens. The 451-yard 6th is a stunner with a downhill drive that must travel far enough around a scrubby waste area on the right to gain a clear shot into an enormous, sunken green that falls away to an interesting back section. 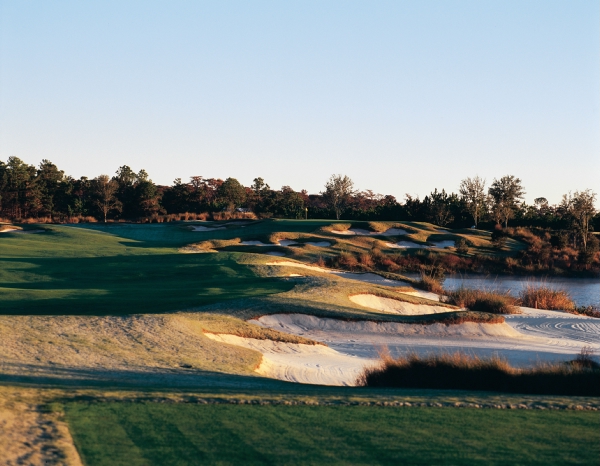 The 13th is one of several tremendous short par-4 at Camp Creek.

The second nine picks up when the 12th hole, a wide par-5 with a Knoll-like green, ventures into a separated 4-hole arena on the north side of the property. The 13th is testy short par-4 across water and bunkers with a nimble approach into yet another sharply elevated small green. After the massive 474-yard 15th closes out this isolated quartet, the scenic par-3 16th to a long, angled green is a nice transition back to the core of the course.

These dynamic greens and shaping give purpose, and substance, to Camp Creek. When kept in tournament form, as they usually are, they’re as delicate and slippery as any in public access course in the Southeast with rounded collars that drip into shaven chipping areas.

If the course has a weakness, however, it’s the harmony of the holes. More than once a run of solid golf is broken by holes that fit into the site like padded snowsuits. Areas that are needed as segues or to hold water like 4, 7 and 8 fail to rise above the level of functionality. Others, like 9 and 18, both curving around a canal, strain to be respected closers but end up as rote replications of concepts Fazio has used elsewhere. Water holes may sell tickets in some places, but holes like these lack the intrigue and subtlety of Camp Creek’s shorter, better holes. (92)