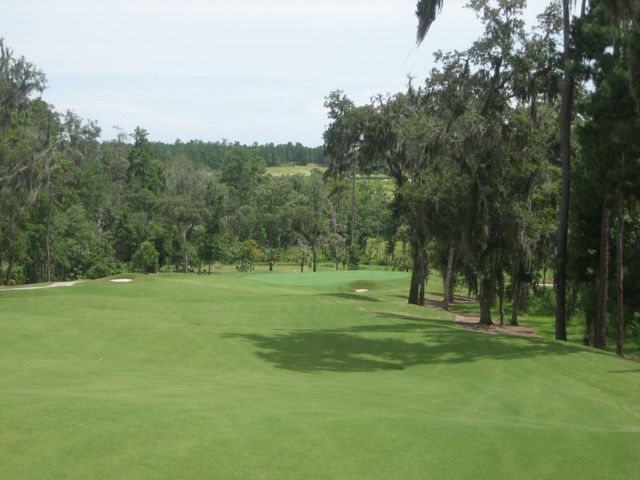 The biggest movement on the course is the downward fall toward the seventh green.

I thought Southern Hills Plantation might have a chance to win national acclaim when I first heard, around 2001, that Pete Dye was building a course in this part of the state. Being familiar with World Woods and the sand ridges that run through the Brooksville area, in addition to the big elevation changes I was told the property had, I assumed all the ingredients would be in place for something spectacular.

The swaths of sand that both World Woods and The Dunes Club sit on run north of Brooksville; Southern Hills, locally called “SoHilly,” is on the south side and built on clays and harder soils. The elevation changes are real, but most of it is concentrated on a forested 250-foot peak on the north end of the property around which most of the first nine gathers. One hole, the long par five seventh, rising and then trundling steeply over one of its shoulders, takes on the brunt of the slope.

The first thing you notice embarking from the plantation-style clubhouse just how much grass there is. The hole corridors are generally wide (which is great), but there’s so much maintained rough it throws everything off scale, and maintenance costs much be extraordinary. 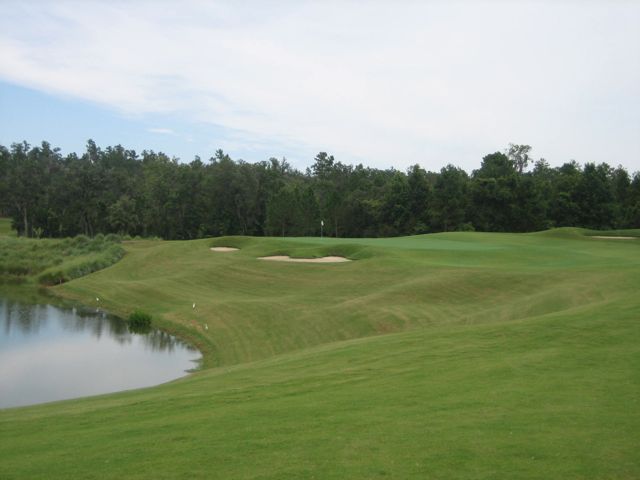 The par 4 second: All that extra rough to water, fertilize and mow.

Beyond that, it’s disappointing how lackluster the architecture is. There’s rarely the sense of danger or of having to walk on the edge that’s prevalent in Dye’s best work. At best there’s some smartly placed greenside bunkering (mostly in the form of small scoop bunkers) and some cool swales and roll offs around the edges of the putting surfaces.

Mostly what you get are enormous holes that slope slightly uphill to help kill the modern game’s Herculean drives, humps and hollows in the fairways, and lots of small bunkers scattered about in strange and out of the way places.

I’d like to know what Dye was thinking here. Is SoHilly a purposeful change up, a kind of precursor to his Olympian size work at French Lick? Perhaps.

With good reason, the professional game has always been (or at least since the 1980’s) at the forefront of Dye’s mind, and sometimes, as is the case with SoHilly, it overrides practical or even entertaining design. 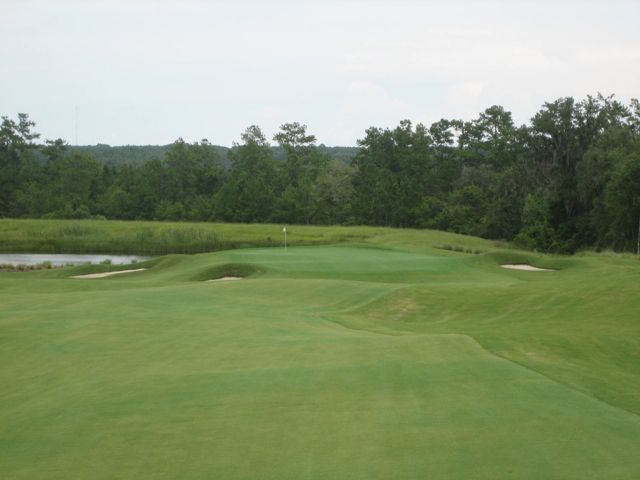 The best features are the bunkering and shapes around the greens, like here at the 10th.

Dye revolutionized golf course architecture in the 1960’s by building intimate courses with hand-crafted features and small but wild greens, things anathema to the industrial blueprint courses of the era. Now he seems to be on the other end of the size scale and what we miss, at courses like this, is the playfulness and devilish details inherent in his nascent architecture and even the classic angle play and right/left-left/right patterning he mastered. In place of ingenuity we now get holes like the 15th, shortish par four littered with the conical “volcano” bunkers he seems to building everywhere these days. 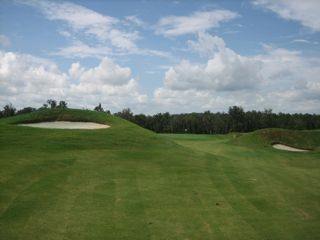 You see Dye building a lot of these “volcano” bunkers of late.

Dye’s designs seem to be getting bigger in response to the modern player and equipment, but he’d do well to once again reverse course and make golf courses smaller and with more spirit. I wish I hadn’t gotten my hopes up so high for Southern Hills Plantation. But even if the property wasn’t what I’d expected, at least Dye could have put a little of the old black magic into it. (88)