Legacy Ridge is a great showcase for the Front Range and Rocky Mountains. At least it has that.

Legacy Ridge in Westminster between Boulder and Denver is a case study for almost everything that went wrong with golf in the 1990’s.

Holes double-loaded with homes on either side?

Name brand architect stamping his “brand” all over the lot?

The obvious thing to say about Legacy Ridge is that it never had a chance to be a good course. The large development around it pushed the golf around so there no rhythm or continuity, just strings of holes that necessitate 10 road crossings. This includes a detour into a far, disconnected eastern flank for 5 and 6, the latter one of the worst holes I’ve ever seen, a par-5 with a table-top fairway, a creek cutting through the landing area and cottonwoods blocking off the second shot. 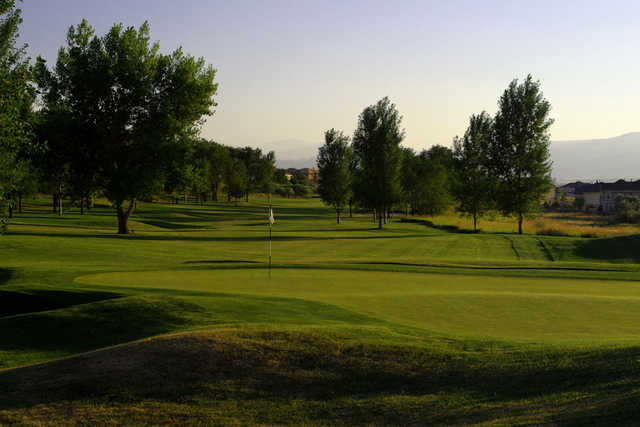 Some holes have an abundance of room. Not the 18th, where you have to thread all three shots through this corridor.

If there’s a rival to this hole, you don’t have to travel far to see it. The 13th forces you to drive to the high side of a fairway that slopes severely toward a wetland gulch. The “play” is for your ball to drift across the fairway, but not all the way down into the hazard, for a clear shot at the narrow, tilting green. If it stays on the high side you have to cut the ball around a cottonwood with a short iron, though the ball is above your feet.

Several other holes have bunkers cut into the drive’s landing zone but no viable route around them on the high side. In others the rough is cut to pinch the fairways so narrowly the only play is to lay up, because taking it on could result in a lost ball. I’ve lost several just steps off the 17th fairway–it’s so thick they’re probably still down there somewhere.

What saves the course is some nice shaping around the greens and bunkers, an overall level of ambition and a set of par-3’s that are difficult but very strong. Too bad the strategies and set-up just make no sense. There are a lot of good courses along the Front Range. Play this one at your own peril. (82)