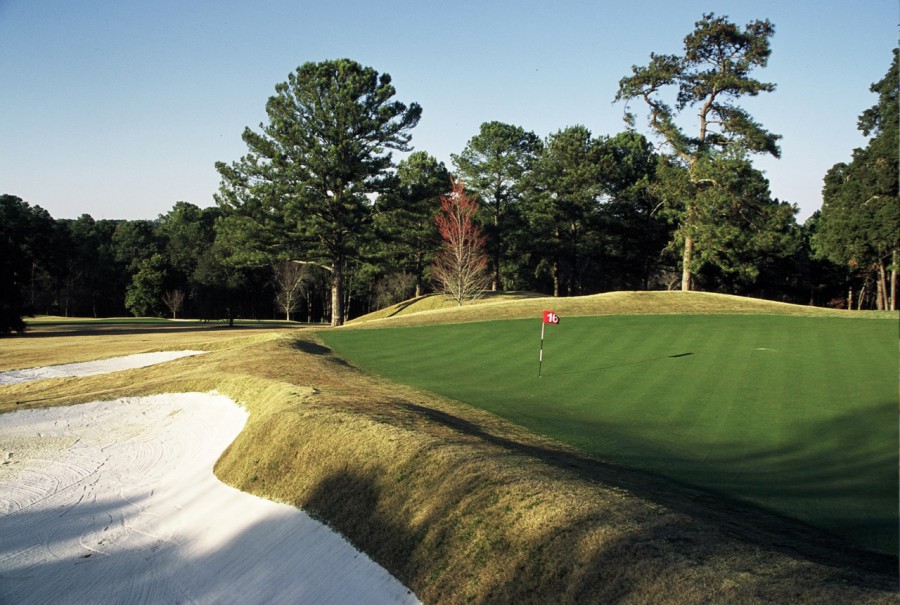 The fantastic short uphill par-4 16th has one of the South’s best punchbowl greens.

The topic of how courses are judged in comparison to their neighbors comes up quite a bit here. Often it’s fair to make assessments about a property based on other proximate courses, but sometimes looking left and right instead of straight ahead makes for lazy analysis. In the case of Augusta Country Club, however, there’s just no way around it.

The shadow cast by the course on the other side of the fence (they share a common boundary) is so total it’s more like a black hole. News and information about ACC rarely escapes free from that gravity, and any direct comparisons are so filled with qualifications as to be completely useless.

And yet, if it were located Atlanta it might be the second best course in that city, too, and looked at in a completely different way. The course is packed with personality and interesting features thanks to an outstanding Brian Silva restoration in the early 2000’s.

There are bunkers at exactly every distance you want to land the ball on the par-5 15th.

Silva had access to Donald Ross’s notes and sketches, and supposedly these provided blueprints for the renovation work. But I wonder if someone at the club mixed Ross’s folders with Seth Raynor’s (Raynor renovated the club’s Lake Course, no longer in existence, in the 1920’s). Many of the squared-off greens and bunker edges and vertical grass faces are textbook Raynor, not to mention the club’s Punchbowl green at the wonderful par-4 16th, one of the best versions in the Southeast.

The busy fairway bunkering, whoever arranged it, is joyous and can be quite penal, and the big, elevated green complexes ringed by deep bunkers are a constant source of entertainment. Most people want to talk about the holes on the lower end of the course that border Augusta National (you can see the famous 13th fairway from certain places on the par-4 9th), and the big par-5 8th cascading down to a green set at an angle on the far side of Rae’s Creek is indeed a good one.

But the best stretch is the run from 11 to the 16th playing back and forth across the upper highland area. This includes two strong par-5’s (check out the fairway bunkering at the tempting 15th, bothering lay-ups all the way through), the aforementioned 16th and two wonderful par-3’s measuring 250 and 150 yards, respectively.

The course would be able to console itself knowing it would be top dog in almost any other zip code. But the truth is nobody in Augusta cares how the two courses measure up. Almost nobody gets to play Augusta National, and the handful of members who do live locally all belong to the Country Club as well, and this is where they play all their golf for all but a few months of the year. (93)