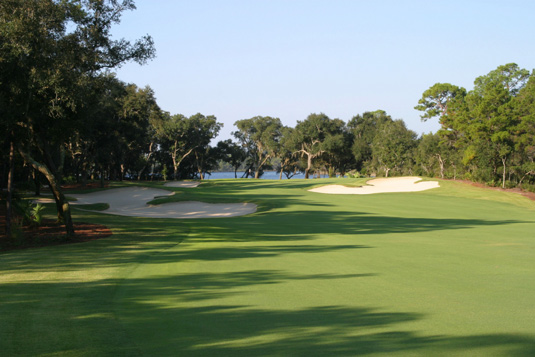 The low-profile nature of Shark’s Tooth is the most alluring of characteristics.

On paper, Shark’s Tooth Golf Club has the ingredients that can combine to make a great course. Located just off the breezy Gulf of Mexico west of Panama City Beach in Florida’s Panhandle, the holes sit on sandy soil, cut through a backdrop haunted with dense tree cover and ominous undergrowth, stretch in several places along the shore of Lake Powell and are designed by an architectural team–Greg Norman Course Design–that’s global in reach and experience.

Unfortunately the ingredients don’t quite come together, and the sauce breaks. Shark’s Tooth is enjoyable, and one of the must-do’s in this part of the state, but by the standard of greatness this is a paper recipe and not particularly soulful cooking.

The strength of the course are the green complexes, most of which display narrow, angled putting surfaces set slightly above grade with naked collars that fade into 360-degree chipping areas. Hitting these targets requires distance control, and getting up and down off the tight lies takes real touch.

The first hole, a mid-length par-4, shows the seductive side of the design with a broad, flat fairway the stretches like a runway up to the slip-shouldered green perched behind several small bunkers. It feels like you could play it ten times and face ten different scenarios.

Holes like 4, 7 and 8 are similar in concept, each a par-4 that asks you to bust it almost anywhere off the tee to roomy landing areas, then switch gears into precision mode. Even when the course makes an appeal to the heart as it turns out toward the lake shore (we’ll forget about the subdivided par-5 6th, a terribly awkward hole), the brain wants the subtlety and nuance of the interior holes. 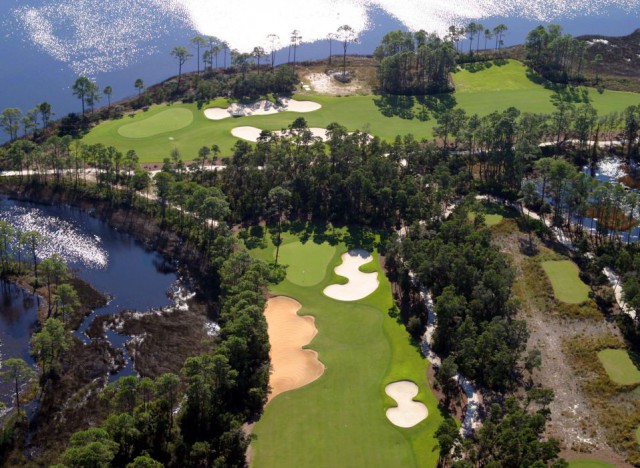 Northwest Florida’s Lake Powell is the setting for a number of Shark Tooth’s more scenic holes.

One reason the parts don’t connect is because the holes are scattered over 500 acres through a discreet housing community. Expectedly, there’s no sense of purpose to the placement of the holes and no opportunity to develop rhythm or interrelation. The journey ultimately begins to feel aimless. Given the setting and sleek features there’s the some sense that the course should be building toward something climactic or more cinematic, but by the time you’re in the home stretch another sentiment sets in: monotony.

Despite some strong moments (and some unfortunate ones, like the bisected par-5 6th where there’s far too little room to play either the first or second shots), one walks away from Shark’s Tooth feeling like it’s essentially no different thematically then Norman’s Grande Lakes in Orlando or Tiburon, just perhaps with better scenery. The two bunker shades, for instance–crushed shell in the waste areas and softer white sand around the greens–seems like a good and useful idea the first time you encounter it, but when done repeatedly throughout the state it begins to feel like a calling card. Ultimately, Shark’s Tooth lacks bite. (87)