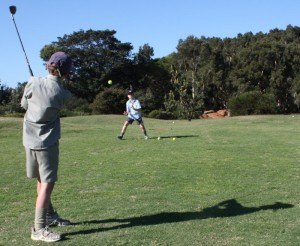 When heading up the final hole at Royal Sydney Golf Club, it was hard not to notice a group of children swinging away on a small parcel of available land to the right of the fairway leading up to the green. They were joined by an instructor, but the methodology of the teaching was somewhat unusual. The pupils were going after the ball with all their might, towards a partner who got ready to catch the ball. This may sound even stranger, although they were not hitting golf balls. Instead, they used tennis balls.

‘Well, if they can’t hit a tennis ball, then how are they going to hit a golf ball,’ said their instructor. It was refreshing to see that at a club like Royal Sydney – one that is steeped in tradition – nothing seems more appropriate than a bunch of kids whaling the life out of tennis balls near the home green. This is one of many examples that are evident of the no-nonsense approach that the Australians seem to take on golf. And you wonder why Australia produces so many world class players.