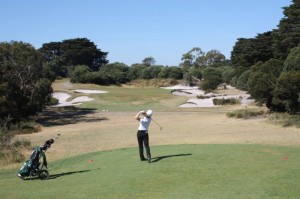 The author was joined on a journey-of-a-lifetime by almost seventy of his colleagues, golf course architects from all over the world on an organized study tour of noteworthy golf courses in Sydney and Melbourne, Australia, in November. The tour was handsomely organized by the Society of Australian Golf Course Architects, and sponsored by The Toro Company, a manufacturer of turf maintenance and irrigation equipment. The title of the tour was ‘In Search of Mackenzie – A Golf Tour to the Land of Oz’.

The title refers to the late Alister Mackenzie, the architect of golf courses such as Augusta National, Cypress Point, Pasatiempo and Crystal Downs in the USA, and many others in Great Britain. During Mackenzie’s trip to Australia in 1926, he left his mark on golf course design in Australia when consulting several golf clubs and laying out Royal Melbourne, one of the highest ranked golf courses in the world, and the venue of the next President’s Cup in 2011.

Royal Melbourne is a leader among equals in the so-called Sand Belt, which is home to one of the highest ranked set of golf courses in the world. Perhaps they are rivaled only by the heathland courses of Surrey and Berkshire, west of London, and the strong series of classic golf courses in and around New York. Melbourne could possibly be the best golf city in the world. 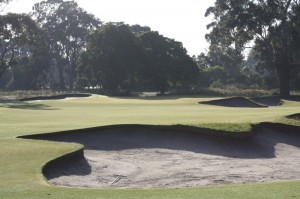 Another Sand Belt course is Kingston Heath, where Tiger Woods made his last appearance before the media circus, in the Australian Masters in late November. He got three million dollars to play in the event, which he then ended up winning, and his prize money only equaled to around ten percent of his appearance fee.

In the Sand Belt, the game is so refreshingly free of any excess baggage. The local approach to golf is simple and direct. For example, when you play golf, you walk. Only people with disabilities and the elderly are allowed to use a golf cart. Of course, the courses can be walked easily, and they are a healthy getaway from places where there is often a long walk from a green to the next tee.

Almost everybody walks, and when arriving at a course you take one of the special trolleys provided to you by the club. They have wide wheels – and they have them for a reason. This may sound strange to many, but not only do these prestigious clubs allow players to pull their trolleys across the greens, or buggies as the Aussies call them. Some of them actually encourage this! Anyone who calls himself a golfer will know that for decades it has been considered absolute sacrilege to pull your trolley onto the putting surface. Before coming to Australia, I had not even seen anybody do this on purpose for the whole of my life.

So why on earth would anyone encourage this? Well, this local philosophy is based on the theory that this will actually help spread out the wear and tear from foot traffic and minimize damage to sensitive areas around the greens, on the collars, between green and bunker etc. The turf quality, consistency and density on these approach areas are one of the hallmarks of the Sand Belt courses, where variety in the player’s options around the greens is one of the cornerstones of their character and concept.

These courses are second to none when it comes to turf conditioning. Not a blade of grass looks out of place. The Royal Melbourne Golf Club was an unexpected exception to this norm on this occasion. As it turns out, the club was getting ready to put the West course through a total makeover in terms of grassing, as a part of the club’s preparation for the President’s Cup, to be played on the club’s composite course on November 14th to 20th this year.