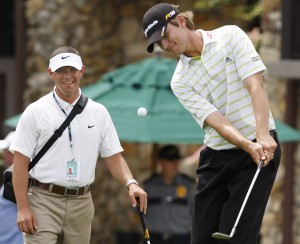 Canadian Sean Foley, seen here enjoying a moment with client Sean O'Hair, is regarded as one of the rising stars among PGA Tour coaches.

With a mind that rarely stops whirring and a jam-packed schedule, Sean Foley doesn’t have many quiet moments.

But every once in a while, he’ll find himself alone with a little time, and it will hit him: He’s living his dream.

“Two nights ago I was sitting in a resort in Maui looking into the ocean with (PGA Tour player) Parker (McLachlin) and all I’m thinking is ‘Wow’,” Foley reflected on the phone from the Mercedes-Benz Championship.

The Canadian native has gone from dreaming about working with some of the best players in the world to doing just that.

His roster of players is considered one of the strongest on the PGA Tour, including Stephen Ames, Hunter Mahan, McLachlin, Sean O’Hair, Justin Rose and Greg Owen. He also works with LPGA Tour player Lorie Kane and elite Canadian amateur Jennifer Kirby.

This cat is one of the hottest young coaches on the PGA Tour, and his trajectory is still arcing skyward. Already, he is arguably the best-known instructor in the history of Canadian golf, and he’s becoming more well known in the U.S. with every victory by his PGA Tour players and the ensuing media attention. His first major media splash stateside was in March’s Golf Digest in a four-page instruction article.

“I’m surprised by what I’ve done, but I’m not surprised,” said the native of Burlington, Ontario. “That might sound vain but I always anticipated that I’d be at this point. It just happened faster than I thought.

“I set this as a goal at 13 years of age. I always wanted to be more like David Leadbetter than Nick Faldo. So, yes, there is a wow factor, but traveling and missing my wife Kate and my (infant) son Quinn is the downside.”

Foley is not just another khaki-clad golf professional concerned solely with pronation, rotation and swing-plane consternation. His interests range far beyond golf–a conversation with Foley might touch on Keynesian economics, Jared Diamond, Che Guevera, Malcolm Gladwell, U.S. foreign policy, and the state of Toronto Maple Leafs goaltending. How many golf pros do you know who read The Economist or books such as Noam Chomsky’s Failed States?

“When I was a kid, I hated to be wrong, so I read everything I could,” Foley said. “It made me kind of a pain in the butt, but I learned a lot.”

Foley is also naturally curious. He’s on a constant quest to learn as much as he can about everything that affects the golf swing, including physics, physiology, nutrition, fitness and, well, anything that connects with performance. Foley is not shy in sharing his thoughts on golf as well on politics and similarly prickly areas, which sets him apart from many of his coaching and playing brethern. That candor and confidence has given him an uncanny ability to connect, whether with tour players or juniors. I once watched Foley talk to a gaggle of junior golfers ranging in age from about 10 to 16 for about 45 minutes at a golf camp, and he had those kids mesmerized for every minute, the way vintage Bruce Springsteen could hold a concert audience in the palm of his hand.

With juniors, he’s instructive, inspiring and a demanding task-master.  It’s a role that he relishes as PGA Tour coach at the Core Golf Junior Academy in Orlando, Florida. Foley says that he developed much of his expertise—both in developing his technical knowledge and how to communicate—in teaching kids. “I learned how to develop players,” he said. “I had kids who hooked it and my level of knowledge couldn’t stop it. That pushed me to gain more knowledge so that I could give my students the best opportunity to learn.”

Despite having a strong clientele around the Greater Toronto Area, Foley felt that to take his career further, he needed to move to the southern U.S. In summer  2006, he and Kate moved to Orlando, Florida where he became Director of Instructor of the new junior academy venture. The academy provides students with intensive PGA Tour level coaching (Core Golf’s Dr. Craig Davies and Neale Smith also work with PGA Tour players) and private school education at Windermere Preparatory School.

“Moving to Florida has allowed me to teach all year, and in doing so I’ve attained more knowledge and experience,” says Foley. “It’s also the Mecca of high-profile teaching instructors.”

Foley enjoys working with junior players who have set their goals high and work hard, including Jennifer Kirby, who enjoyed a breakout year in 2009, winning the Canadian and Ontario women’s amateur championships, and Canadian and Ontario junior championships. “Being based in Florida provides these young players with the ability to work harder and longer than kids in Canada they compete with,” he explains. “Time is a true advantage for them.”

Shortly after Foley moved to Florida in 2006, Ames asked him to become his instructor. Ames said he was impressed at how well Foley worked with players in The Stephen Ames Cup, an annual junior event between Canada and Trinidad-Tobago. Gradually word spread about Foley and his roster of students began to grow.

“I can’t thank him enough, but Sean Foley has really changed my game around,” O’Hair said after he won the 2009 Quail Hollow Championship in 2009. “I think he’s changed my life forever, so I owe a lot to Sean.”

Foley and Davies just scored a double victory when their mutual client Hunter Mahan won the 2010 Waste Management Phoenix Open in February. (Is that the worst named tournament in the history of the PGA Tour?)

“In some form I think I’ve attracted guys who really like to think about the swing,” Foley told The National Post in 2009. “I can’t teach people to stand there and pretend they are skipping rocks across water… What I do is highly conceptual and highly empirical. I’ve told five to ten players this year that I’m not the right guy. I’m not willing or arrogant enough that they can learn this way. They need to find someone who can teach them and that just isn’t me.”

Whether he’s working with Mahan at a major championship or with a Core Golf student at Orange County National, Foley’s ultimate aim is to help his protégés become more fulfilled and better people.

“I try to get my students to understand perspective, so they don’t lose the plot in life,” he said. “I’m more of a coach than a swing instructor. I know how to get the best out of my players.”

That’s why most of Foley’s students have their own ‘wow’ moments.

TheAPosition is a big fan of golf tournaments to help improve your game.