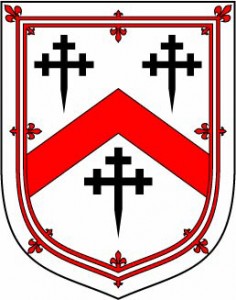 Coat of Arms of the Marquess of Ailsa

On his Turnberry estate, the Marquess of Ailsa, a former Captain at Prestwick Golf Club (home of the first Open Championship in 1860), had the Royal Troon professional Willie Fernie design a layout that opened for play in 1901.

The Marquess soon agreed to a take-over by the Glasgow and South Western Railway, which led to the construction of the resort hotel in 1906 and a long history of competitions at Turnberry. But the two courses on the site, the Ailsa and the Arran, were pressed into service as an airfield in both world wars.

The Ailsa course reemerged in 1951, designed by P. Mackenzie Ross. Donald Steel redesigned the Arran course, which opened in 2001 rechristened as the Kintyre Course (which I played today). A year later a new par 4 and par 3 Arran course opened as part of the onsite Colin Montgomerie Links Golf Academy.

I wandered over to the Academy in the morning to try and iron out, so to speak, my sideways problem. It didn’t help, and I approached the first tee with trepidation, since the Kintyre course imposes difficulties the Ailsa course is less prone to—more narrow fairways and more profuse gorse, which gobbles up offline shots with prickly efficiency.

The gorse, an evergreen shrub, is in full yellow flower, redolent of coconut. The blossoms will fade by June, but the toothy bush will remain, and the abundance of it on the Kintyre Course makes for many a daunting tee shot. Hit one into the gorse, and you might as well hit one into a lake, except the penalty is stroke and distance.

The rough on the Kintyre Course is deep and penal, too. I nestled many a ball into it today, and getting it out was akin to another penalty shot. And first, of course, the ball had to be found. Luckily, I was playing with a 16-year-old named Chris Todd from the Northern Ireland town of Green Island, outside of Belfast.

Chris, aside from being a fine player, had a keen eye for following wayward shots, and kept me from losing a single ball all day, despite the (only occasional) odd shank or pulled drive. 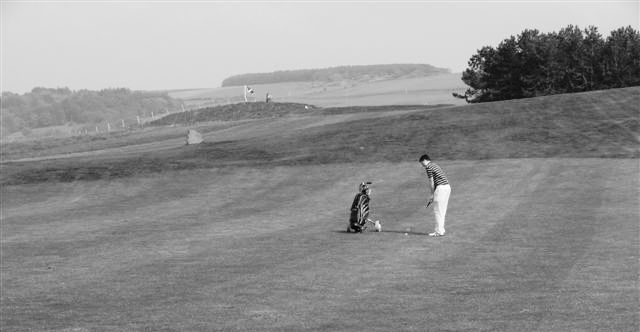 Chris Todd on the Kintyre Course

Our playing mates were Tom and Margaret McCoy from Newcastle West, members of Ballybunion. So for me, it was an Irish day in Scotland. They told me the hotel guest green fees were £140 for the Ailsa Course, £80 for the Kintyre.

We had a grand time on a lovely day, even if the prevailing haze again cloaked the Ailsa Craig, and suggested the old line, “If you can’t see Ailsa Craig, it’s raining. If you can see it, it’s about to rain.”

To be honest, my last three trips to Scotland have been blessed with abundant sunshine, and I probably shouldn’t jinx it by mentioning it. But it looks like the days ahead will be sunny and clear as well, so the old expression that, “If there’s nae wind and nae rain it’s nae golf,” is nae quite holding true so far. Wind there has been. Of rain, nae a drop.