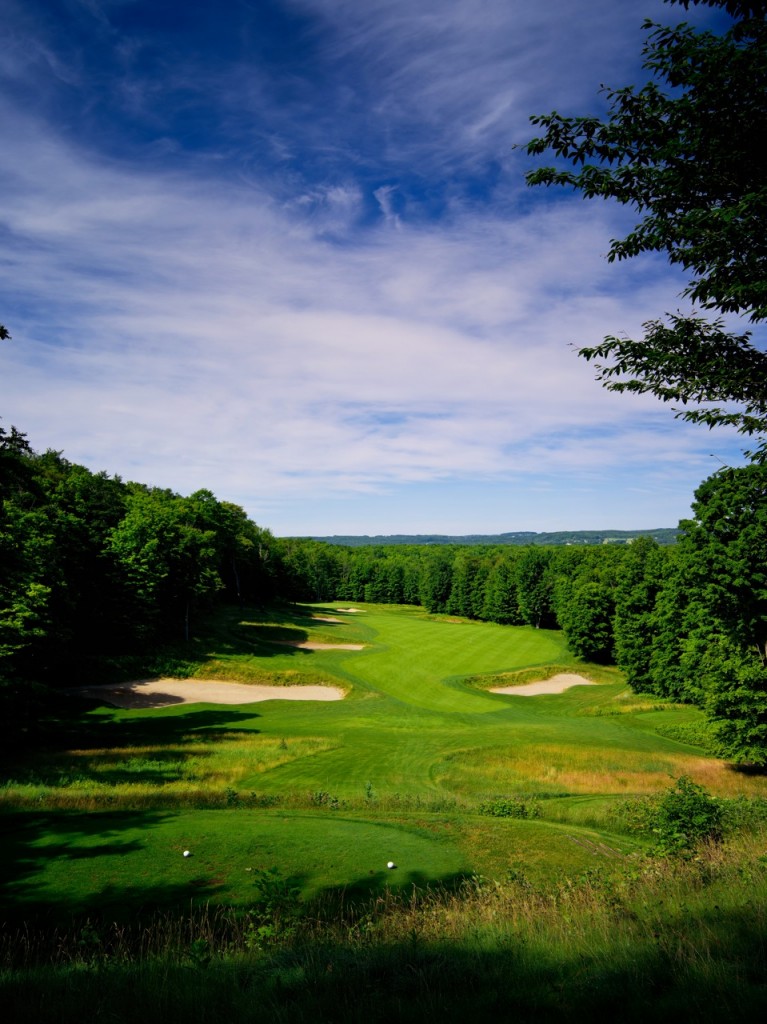 While no stranger to Michigan golf, I’ve never made it to Gaylord before, and my immersion today reminded me of a dip I took years ago in chilly Lake Michigan at the Sleeping Bear Dunes National park—bracing, eye-opening and ultimately thrilling.

We passed through the Alpine Village-themed town of Gaylord yesterday afternoon on our way to the Treetops Resort, our base of operations for the four-day Warrior onslaught, tantalized by the sight of promising golf holes along the roadway. There are 81 holes at the Resort, so there’s ample tantalizing to be done.

Our first 18 was the Rick Smith-designed Signature Course–which prompts at least a brief history of the resort, which started out in 1954 as a 179-acre mom and pop ski hill of no extraordinary note. It was automotive parts manufacturer Harry Melling who, after purchasing the Sylvan Knob operation in 1983, ultimately had the vision to expand the property and turn it into a four-season resort.

There was something in the fresh northern Michigan air in the early to mid-1980’s, when courses debuted at Boyne Mountain (The Monument), the Grand Traverse Resort (The Bear), and Shanty Creek (Legends). Melling had his finger on the pulse, and the first course at Treetops, the Robert Trent Jones Sr. Masterpiece, opened in 1987. 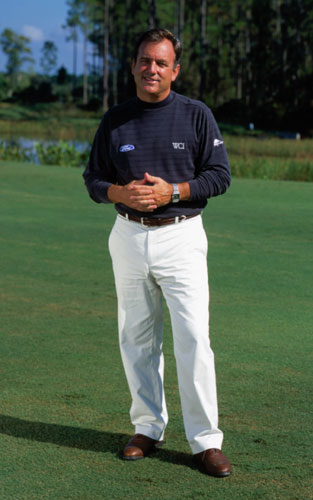 The confluence of these course openings started the ball rolling in the region, and the momentum created a gold rush of development that punched Michigan’s ticket on the golf destination map.

It was Jones who rechristened the Sylvan Resort. When first looking over the property, he remarked, “You can’t see anything but treetops,” and the name stuck.

Rick Smith came on the scene before the Masterpiece was finished, and he has been an integral part of the resort ever since (including joining the new ownership group in 2002). Now well known as one of the game’s top instructors and course designers, at the time Smith was a young and energetic golf professional, bursting with ideas.

Kevin McKinley, current director of golf at Treetops, said, “Rick is the sort to usually ask for forgiveness rather than permission, so he went to work on the Threetops course after a visit to the Masters, talked Tom Fazio into coming here to do the Premier course, and followed that up with the Signature course.”

The ideas for the Signature course were bubbling in Smith’s head after a trip to Scotland and Ireland, visiting some 25 courses in 30 days.

“He didn’t really move much dirt at the Signature,” said McKinley. “And in the polls we frequently conduct here, the Signature always just edges out the Fazio course as the favorite. It’s easy to see why, since it can appeal to all types of players, and remains a course you can score on—or get into trouble on.”

Unlike fellow Warrior Jeff Wallach, I had no skepticism heading into the round. I’ve played Smith’s Shenandoah course at the Turning Stone Resort in Verona, New York, several times, and as recently as two weeks ago. (He also fashioned a stout par-3 course there, Sandstone Hollow.) I knew he could fit a course well into a landscape.

And the visual excitement is pretty constant here, beginning with the long drop from the elevated tee at the first hole. There’s something utterly satisfying at the beginning of a round, watching a well-struck tee ball soaring to a low and distant fairway. And this pleasure continues throughout the round with a plethora of elevated tees affording grand views of the Michigan woods and hills. It means there’s not an excess of tee box strategy, more of a hearty grip-it-and-rip-it lustiness at work. 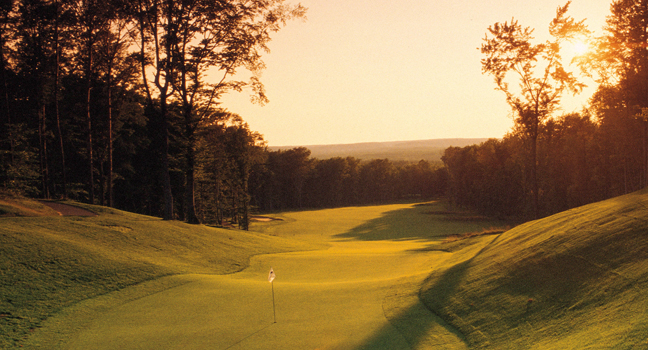 Still, there are all those par-3s to contend with, three on the outbound par-34 nine (par 70 total). I was a little startled on the par-3 second, when I hit one dead sideways into the wilderness. I thought I had ensured my immunity to such indignity by not running over that skunk a few days ago. (The mystified should click here.)

There are 135 bunkers on the course–135 more than at the Ocean Course at Kiawah apparently–but they’re more eye candy than strategic threats. Much of the work to be done on the course will occur on the expansive greens, all of which have some sort of action unfolding, not to mention a tendency to roll front to back.

All of the holes feel well-separated, since the course is spread out on 400 prime acres. That now represents one-tenth of the 4,000 total acres at Treetops–well done, Harry Melling. 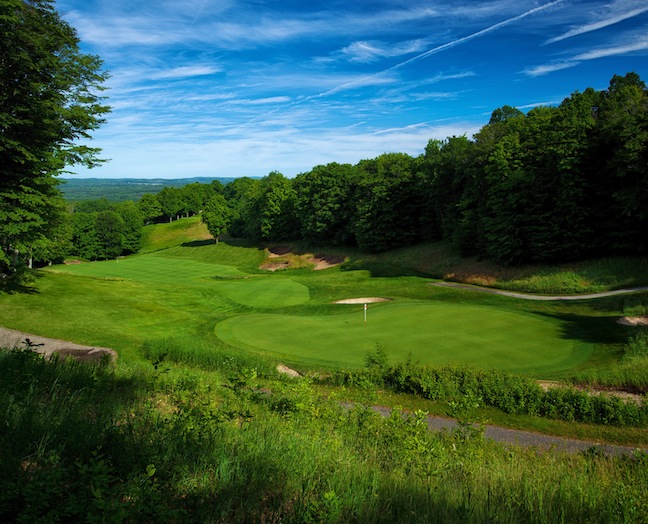 Further hole descriptions can be found in a post by fellow warrior Wallach (click here). But one postscript–while it’s hardly a make or break proposition on any course, I have to say I love the scorecards at Treetops. Not only do they have a built in yardage guide with descriptions of and suggestions on how to play each hole, they also have pace of play timings—which at the Signature should get you around in no more than 4:30. Though playing even faster is always encouraged, of course.
–July 31, 2012 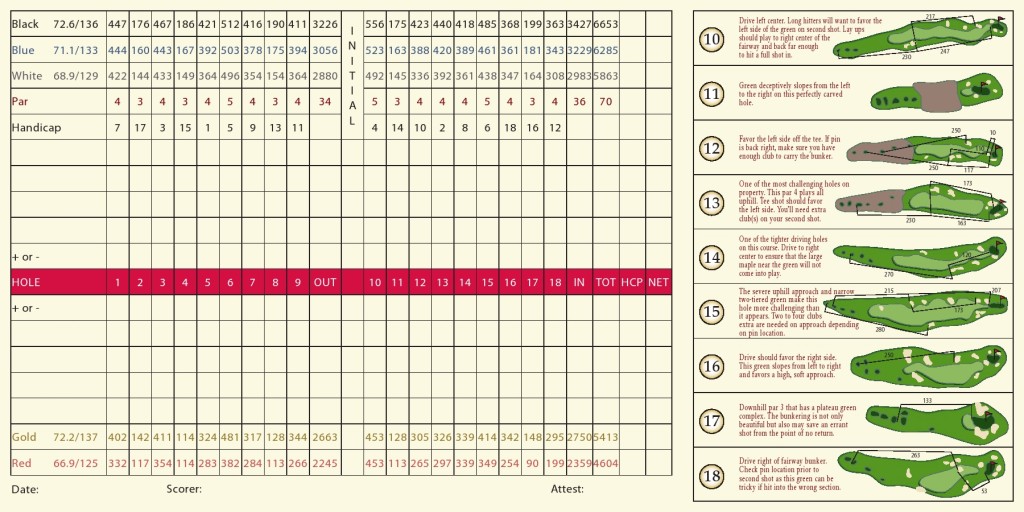