Despite the positive reviews I’d heard of Rick Smith’s golf design work, I was still skeptical about a former instructor taking on course design on the side and creating anything of note.So first off, apologies. Followed by kudos. Followed by genuine golfalicious excitement after playing Smith’s Signature Course at the Treetops Resort in Northern Michigan.  I’d also heard much fluffing of the destination itself over the years but realized recently that somehow “the mitten” was one of only about ten states I hadn’t played golf in yet.

I’m a convert. Bring me some whitefish and a bowl of cherries, and whatever else I’m supposed to eat here, I’ll root for the Wolverines or the Lions or an other other animal that stakes a claim to the hearts of Michigansers if they’ll let me play the Rick Smith course again, as well as a few others I’ll talk about here later this week.

Smith’s “Signature” course weaves up and down 400 acres of rugged wilderness and despite it’s Midwestern location has the feel of a true mountain course.  The par 70 layout stretches to 6,653 yards punctuated by forests and natural vegetation, blended with naturalistic bunkering (to the tune of 135, about 120 of which the Golf Road Warriors hit into).  Par is 34 on the front– with three par threes and one par five, and 36 on the back.  So try to do some of your scoring up front. 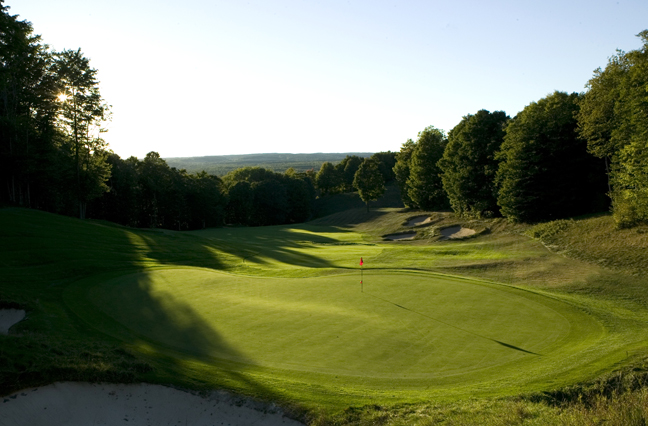 The course opens with a very welcoming, resorty short par four with slopes on both sides of the fairway that work hard to push balls back toward the short grass.  But don’t expect this sort of welcome to last.  Some purely decorative bunkering high on a ridge to the right is so far removed from the areas of play that even Tom Bedell couldn’t have hit a ball that far off line.  But the introduction here is a polite bit of aberration, as the course becomes stouter immediately after your first putt drops into a cup.  While number two, a downhill par three, gives you a side to miss to helps to transition the course and familiarize you with the challenges to come.

Number three is the first truly great hole, offering a wide look off the tee at 467 dog-legging yards with artful bunkering featuring bushy brows.  I hit two hearty shots with driver and three wood and barely eked onto the green, still about a gazillion yards from the back pin.  Moving through the front nine the heathery Scottish feel continues, especially as relates to the fine bunkering.  But while aesthetically rugged, it’s still eminently fair.

Par three number nine somehow expresses a lovely autumnal feel and the tenth reminds you that you’re in ski country, even if the mountains aren’t quite what you expect of a ski resort– which, in fact, Treetops transforms into during winter.

Smith has created greens that most players will love– gigantic and thus easy to get to whether you’re hitting a long iron from the fairway or pitching from a close-in miss.  Most have a single hump or slope to contend with, making them very fair even on long putts.  By number eleven, the putting surfaces seemed to be gaining in steepness and speed.  Golf Road Warrior Brian McCallen noticed that many  were sloped from front to back, which rewards less-skilled players who are more likely to hit short by helping to carry their weak shots toward the pins while forcing better players to recalculate club selection to take this into account.

Thirteen is one of the best holes on Signature– a great, long uphill par four of 440 yards that feel like 44,000, with an unmowed slope between the fairway and green discouraging run ups and forcing an aerial attack.  Several holes on the course also feature well-placed trees that add visual appeal and also guard the greens from certain angles but never feel tricked up or out of place.

And players like me will appreciate the very readable and reachable par-five fifteenth, a 485-yarder that allowed me to reach the green with two well-struck shots.  The green is shaped like an alley and hard-hit but errant shots may carom off the walls and back to the putting surface.

Discussing the golf course over a post round Oberon Ale, the Golf Road Warriors actually agreed on something: that the Smith course was not just a fine introduction to the offerings at the Treetops Resort, but among the strongest resort courses any of us had played anywhere.