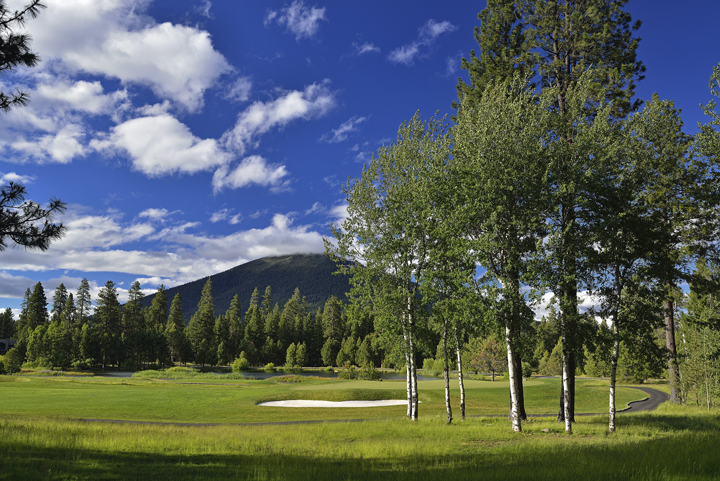 Eight miles from the wild-west town of Sisters, Oregon lies Black Butte Ranch, a residential resort community offering play on two golf courses: Big Meadow and Glaze Meadow. Both layouts are lined by cheering throngs of Ponderosa pines and aspens. From many places on this sprawling, gorgeous 1,800-acre property full of bike paths, tennis courts, pools, and Jacuzzis, guests have views of as many as seven Cascade Mountain peaks.

Few golf courses have benefited more from the kind of cosmetic surgery that is golf course renovation than Black Butte’s Glaze Meadow course.  Although beloved as one of the earliest golf layouts in the region since it opened in 1982, and admired for its impressive views, Glaze Meadow was long known as an ugly step-child of a golf course with one of the worst opening holes ever built.  But last year prolific architectural master John Fought  completed a $3.75 million overhaul.  The revamped layout—carving through corridors of  stately trees and playing over bouldery streams, wetlands, and natural areas— takes maximum advantage of its setting and lives up to its entire potential as a fun, perky walking golf course that encourages you to take a few chances while sipping the intoxicating scenery.

Fought’s work extended the course to more than 7,000 yards, rebuilt all the greens, and improved sightlines and shot-making options.  Square tee boxes, elevated putting surfaces, deep grass-faced bunkers, and enough doglegs to build at least two dogs, lend a classic feel from the era of Donald Ross and other renowned architects of golf’s Golden Age.

A deep thinker, Fought had this to say about creating great golf greens . . .

“There are many things curious to a young golf course architect as he begins his career.  One of the first things I did when entering this field was to read design literature from the “Golden Age” — architects from the 25-year period beginning in 1910.  Books such as “Golf Architecture in America” (George C. Thomas), “Golf Architecture” (Alister Mackenzie), “The Links” (Robert Hunter), and “The Architectural Side of Golf” (Wethered & Simpson) were inspiring and thought provoking.

“Through my amateur and professional playing career, I had played many of the great works of this era, including Augusta National, Pebble Beach, San Francisco Golf Club, Shinnecock, Pinehurst #2 and so on.  My desire was to discover the secrets from those who designed such interesting golf courses.

“One of the key elements consistent in golf masterpieces was putting surfaces.  Greens are much of what makes these courses what they are — great and, most of all, timeless.  Charles Blair McDonald, our first U.S. Amateur champion, and an important design aficionado of the early years, said, ‘Putting greens to a golf course are what the face is to a portrait.’  That is as true today as it was when golf was initially being developed in America.

“With this in mind, I focused on fine-tuning my design for greens.  On several of my early design projects, I endeavored to be precise with my sketches, hoping that the contractor would build my ideas exactly as I had drawn them.  A funny thing happened — they did build them exactly as I drew them … and I was disappointed.  I had been so perfectly precise with my contour lines, I couldn’t help but wonder what had gone wrong?

“It was then I came across a pearl of wisdom from one of the masters, Dr. Alister Mackenzie.  When one of his golf course contractors was asked how he had achieved such wonderful movements in his newly constructed putting surfaces, Mackenzie related, ‘it was perfectly easy; he simply employed the biggest fool in the village and told him to make them flat.’  While this seemed a bit silly, it got me to thinking about the process I had been utilizing to design and build my greens.

“In a roundabout way, this approach made me rethink my method for building greens.  I needed to go back to the basics.  I discovered what I really wanted in my greens was soft, interesting contours that flowed naturally.  After carefully studying my approach, I discovered that my method of carving out the greens cavity (for USGA specifications) during the initial construction process left me with disappointing results.  My greens had become too geometric and static.  So I resolved to design my greens in concept on paper first, and then finalize all the fine contours on the green on site by building all final grades first and then digging the well to conform to my finished grades.  I am now able to achieve the results I am seeking — soft natural contours.

“With that small bit of thought provoking advice from an architect who had been dead for nearly 65 years, I gleaned some real value.  With a small change in my method of construction, I was able to create wonderful interesting greens.”

He certainly accomplished this at Glaze Meadow, which  joins Black Butte Ranch’s Big Meadow Course, originally designed by Robert Muir Graves in 1970 and renovated by Damian Pascuzzo five years ago.  Big Meadow luxuriates over 7,000+ yards of expansive, sweeping cape-and-bay style bunkering and elevated green complexes. On the fourteenth hole golfers who lift their heads will notice one of the best views of Three Fingered Jack, a jagged former volcano rising above the Ponderosas– which Golf Road Warrior Tom Bedell renamed “Three Jack” while giving it the finger, after missing an equal number of putts on one of the greens. 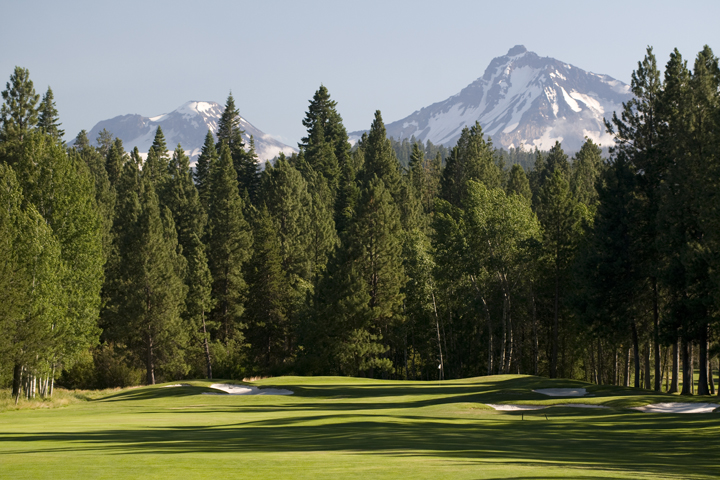