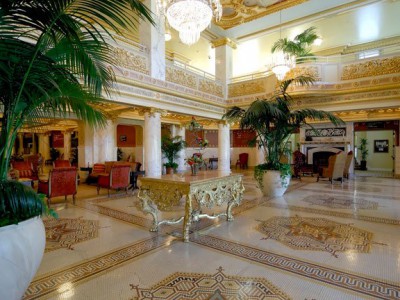 The French Lick Resort in Indiana has no discernible relationship to the book that I can see, but guests staying at the posh property much choose between two hotels that are not so much opposites as sisters, so perhaps closer to the Brontes than Dickens, if that makes any sense.  I mention these books not just to prove that I actually read them in college but to make the point that at French Lick, two historic hotels– The West Baden Springs and The French Lick Springs— also exude a European sophistication and  luxuriousness as well as a deep historic context that goes back to the turn of the 20th century.  They both grew up around the natural mineral springs that have attracted bathers and provided health benefits for centuries.   If Dickens had been writing about them he might have said, “It was the best of antique baseball games on the front lawn, it was the best of Dixieland bands on the veranda, it was an age of building an atrium to rival the Pantheon, it was an age of building a gorgeous yellow Mediteranean behemoth to rival a palazzo, it was an epoch of Donald Ross golf, it was an epoch of Pete Dye golf, it was the season of quiet jazz in the library, it was the age of hot action in the casino, it was the spring of spa treatments, it was the autumn of the world’s greatest Bloody Marys…” 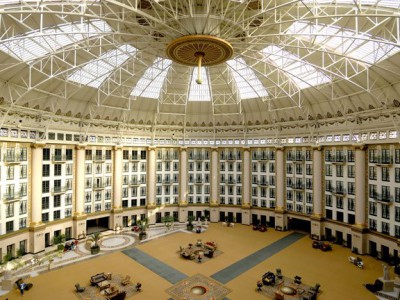 During a recent visit to French Lick our Golf Road Warriors crew was ensconsed in the circular luxury of the West Baden Springs Hotel but also had opportunity to enjoy some of the charms of the French Lick Sprints Hotel, and so comparing and contrasting is inevitable for anyone who ever wrote an English lit essay back in high school.

There is a moment when you first walk into the West Baden, maybe having ridden the shuttle from the Louisville airport with a combination of anticipation and exhaustion from the day’s travels, and you’re expecting the standard reception desk in the standard lobby and you pass through the glass doors and stop short in your tracks because you suddenly find yourself in one of the largest and most ornate indoor spaces you’ve ever seen, as if an Italian fashion designer had decorated a stadium in mosaic tile and glass and high clerestory windows, not to mention rich carpets and a fireplace large enough to fit the Green Bay Packers front line.  And then when the windows register on your consciousness and you see the balconies hanging five stories above you and catch a glimpse of someone walking past the French doors, you realize: holy shades of the Vatican, those are actually guest rooms!

Also not obvious at first is how much more there is to the West Baden than just the rooms and atrium.  A hallway on the ground level circles just outside the atrium connecting a coffee shop, the terrific Sinclair’s restaurant, a spa, boutiques, the library described in another post on this site, and doorways leading outside to formal gardens and pools and roman structures that once housed the historic baths here at the beginning of the 20th century. 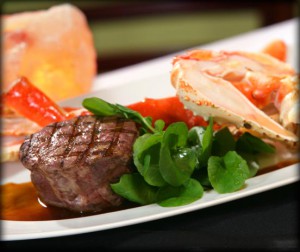 Our group of warriors discovered that four days wasn’t ample time to discover all the secrets of the great hotel– especially as we also spent some of our time at the sister property a mile down the brick road.  Whereas the West Baden is stately in a quiet and understated way, the French Lick Springs Hotel seems a bit more sprightly, with guests rocking both in chairs on the verandah and rocking out inside the casino and other facilities such as the Power Plant Bar and Grill on the basement level.  Surely the highlight of our foray to the French Lick hotel was dinner at the classic 1875 steakhouse, where the Wagyu beef astounded and the strawberry desert made at tableside delighted to the point of causing some serious competition.  Warrior Anita Draycott writes elsewhere on this site about Tomi Parker, possibly the greatest living bartender, who created cocktails worthy of royalty and who’s very name brings to mind the gangsters and swells (Al Capone, for one) who used to come over from Chicago for great food and a greater good time in the old days.  Food and Beverage Manager Tom O’Connor runs a tight, clean, old-school ship at 1875 that is everything a steakhouse should be, from the creamed spinach to the special Woodford Reserve bourbon he shared with us after the meal.  Even the chef came by for a quick chat on his way out, as we’d sat late into the evening, as is always the case with the best dining experiences. 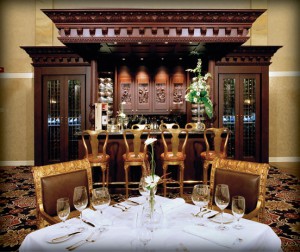 The French Lick has facilities to match the West Baden with pools and spas and guest lawns full of frolicking children, but also has the added attractions of a casino that manages to rise above the usual casinos not in Vegas or Monte Carlo.  The French Lick is also slightly better located to walk out to the resort’s Valley Golf Course, designed as the original layout by Tom Bendelow back in 1907.  NIne holes of the original course remain, offering a family-friendly option with a convenient driving range, short game facility and even an indoor academy.

As another of Dickens’s characters might have said of a visit to French Lick Resort, “Please, sir, may I have some more.”