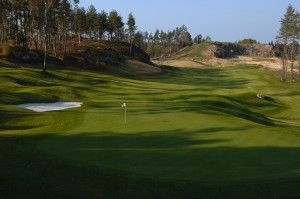 What better time to reminisce about long summer days than in the darkest depths of winter?  As we approach the shortest day of the year in the northern hemisphere, let’s think forward to the other side, when there’s nothing quite like heading out after dinner in late June for a cool, leisurely 18 holes (as our neighbors to the south may be enjoying right now).  Or 36 holes if you’re playing some of our favorite northern venues below— at some of which, around June 21st, you’ll need to worry about running out of golf balls long before it ever gets dark (which may not occur at all).

Southeast of Belfast, Northern Ireland, Royal County Down— created in 1889 by Old Tom Morris— is one of the world’s preeminent golf links.  Blind shots, high dunes, and tricky greens make a caddie helpful—you can always ask him to play a daunting shot.  Peugeot Golf Guide awards RCD 19 of 20 possible points.  Toast your round with a creamy local stout in the clubhouse following the final putt.

The Other Kind of Guinness Record

Outside Sapporo, Japan, the ninth fairway of Katsura Golf Club is home to the world’s largest Katsura pine tree.  This Robert Trent Jones II course carves through an entire Katsura forest so that no hole plays parallel to another.  The natural layout boasts large water channels and deep ravines, and has been ranked among the top ten courses in Japan, It dares you to set a record of your own (and no, we don’t mean largest divot).

Land of the Midnight Putt

At the Anchorage Golf Course in Anchorage, AK, moose, bear, and fox may join your foursome on the greens (be careful: moose cheat).  This tree-lined 6,600-yard layout overlooking downtown Anchorage at the base of the Chugach Mountains also proffers views of Cook Inlet and Mt. McKinley.  The course is associated with the Alyeska Hotel and ski resort.

Located so far north in New York State (in Peru, outside Plattsburgh) that locals may speak Canadian, the Adirondack Golf and Country Club offers 6,894-yards of Carolina-style golf designed by Geoffrey Cornish and Brian Silva.  The layout was nominated for a best course design award by the American Society of Golf Course Architects.

Golfers can reach Bro Hof Slott Golf Club, twenty miles north of Stockholm, Sweden, via boat, train, or motorway—options that reflect that the golf holes themselves can also be approached in several ways.  Built adjacent to a fjord, the Robert Trent Jones II layout stretches nearly 8,000 yards over hilly terrain studded with rock outcroppings and copses of trees.   Bro Hof currently hosts the Scandinavian Masters on the European PGA Tour.

The name “Hills Golf Club” refers to architect Arthur Hills and might at well include the name of his design partner Steve Forrest in describing this Swedish delight that actually routes over hills and through forest. This risk/reward masterpiece outside Goteborg provides opportunities for golfers to recover from shot-making mishaps on a layout designed as purely and cleanly  as a piece of handmade furniture.

In summer, the great white North (Canada) becomes the great blue North as the days stretch long into the p.m. hours.  Tucked between Ottawa and Montreal, Fairmont’s Chateau Montebello offers terrific greens beneath the great blue.  Guests of the stunning log cabin resort can play the 1929 Stanley Thompson design, a secluded Audubon International Certified Cooperative Sanctuary course with views of the Laurentian Mountains.

Golf is a Scream

Southwest of Oslo, Norway, and surrounded by coves and fishing villages, lies Tommy Nordstrom’s Borre Golf Course, built in 1934.  Routed around a noble mansion on former farmland (the 17th-century farmhouse serves as clubhouse) and tucking into woodlands, the course exudes a crisp natural feel.  After golf, visit nearby Viking burial mounds and Edvard Munch’s house.

During spring and fall, green fees at The Wilds Golf Club, outside Minneapolis, are determined by the temperature.  In high summer this Weiskopf/Morrish venue is a bargain, especially in the evening.  It meanders through Ponderosa pines, hardwoods, and wetlands, with water on half the holes and 70 bunkers full of the same sand used at Augusta— though your own experience in them may be less than “mastersful.”

Just north of Copenhagen, Denmark, Rungsted Golf Course is a rare design by C.A. MacKenzie, brother of renowned Scottish architect Alister MacKenzie.  The well-balanced course employs huge trees, subtle bunkering, and natural water hazards rather than length to create difficulty.  As at several famous British courses, a railway line runs close to the fairways (in case you need to make a fast escape).