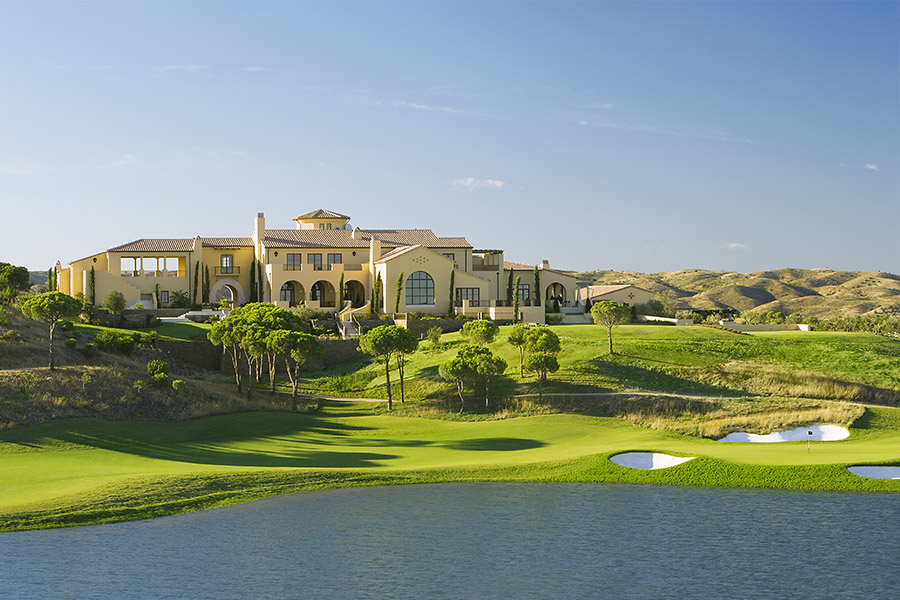 #18 and Clubhouse at Monte Rei, Site of My Record-Setting Round

It’s not every day that a fourteen handicap sets a course record, but on a trip to Portugal’s warm, sunny Algarve region, I shot the lowest round ever recorded at Jack Nicklaus’s Monte Rei Golf and Country Club.  After I holed a twelve-footer for birdie on the eighteenth green, my record held until my playing partner, a young assistant pro, two-putted a few moments later.  The record dropped from 89 to 73.  It wasn’t exactly Al Geiberger posting 59 in a PGA Tour event (one of golf’s most enduring records), but it was mine—at least until it wasn’t.

As a golf journalist I’ve been lucky enough to set several course records because I was the first player to ever complete official eighteen-hole rounds on layouts that wouldn’t open for months.  Several years ago, after playing Ocean Hammock Golf Club (another Nicklaus course in Florida) with my family, Wallachs actually held the men’s, senior’s, and women’s records simultaneously.  That afternoon, staff trailed behind our pioneering group with buckets of sand and hand-filled our divots to return the course to its pristine condition so that nobody could tell we’d played.  Not even Jack himself had been around the entire track yet.  You just can’t feel too bad when your course record is broken a few weeks later by Jack Nicklaus.

But the experience of playing virgin layouts runs deeper than simply posting a course record that holds for a month (or a minute).  It’s more about being first than being best, and even as I know that subsequent golfers will carve a wider path where I’ve been and easily chip away at the best score I could muster, at the beginning the experience is that of a frontier.  And score is merely the trailhead.  If only for a moment, I am the Captain Meriwether Lewis of golf courses, headed into unexplored terrain with the hope of returning—whole, but possibly changed— to the place I started out from.  And with luck I might have a few adventures en route, encounter friendly natives or indigenous fauna, and come back with a good story or two.

At Monte Rei, for example—located in a remote area outside the tiny medieval town of Tavira— local laborers were still putting final touches on bunkering, irrigation, and other aspects of the golf course that would become invisible to later players in the way that city dwellers never encounter the rough camps and pioneer cabins that preceded their condos and high rises.  Not having ever seen an actual golfer on the course before, one worker came running toward us on the thirteenth fairway after we’d hammered our tee shots.  In his hands, like fragile eggs, were the balls we’d hit—one down the middle and one just off to the left in a bunker.  Eager to please the assistant pro and impress with his willingness to provide service, the worker had retrieved our drives so we wouldn’t have to pick them up ourselves.  It was a rare entertainment to watch the assistant pro explain to him in Portuguese, with no shortage of hand gestures, that the rules of golf require players to hit those balls again— from exactly where they landed.  Which seemed to strike the worker as a dumb way to spend the afternoon.

But such is life on the true frontiers of golf, where divergent cultures first interact.  In six months that same worker may look on with disdain at the heavy trail of golfers pounding endless drives into the fairways he’s manicured, and marching past to hit them again, like the inevitable armies of progress, like manifest destiny in polo shirts.  He may long for the days when the place was empty and he wrought a beautiful new landscape out of the dirt.  Of course, he was first long before I ever was.

More recently I was lucky enough to play in the first group ever to go round at Robert Trent Jones II’s Chambers Bay Golf Club outside of Tacoma, Washington.  I played with Jay Blasi, one of the architects; John Strawn, then the CEO of RTJ II, and Tony Tipton, a county executive partly responsible for building the terrific, public, walking-only venue.  In our own ways we’d each plotted to be first to play the golf course, and so we ended up as a foursome doing it together.  We hit all our shots off squares of carpet that we dragged around with us so as not to leave marks on the perfect turf.  The golf course lay before us, green as an unpicked fruit.

When we teed off on the first hole directly at the blue waters of Puget Sound and the Olympic Mountains beyond, I sized up my competition—perhaps the way Amundsen considered Scott as they raced to be first to the South Pole.  At least one of the others was a better player than me.  I knew I’d probably need to hole out before him on the eighteenth green to claim the course record even temporarily.

But while I marked scores in my notebook for most of the front nine, nobody else was even keeping track.  Sure, we celebrated the first par (mine) and the first birdie (the architect’s) ever made on the course, and we tallied the progress of our two-man best ball match (the CEO and I beat the architect and the county executive on number eighteen).  But keeping score seemed in some way like walking in a beautiful, untrammeled territory and wondering how much money sub-divided lots might eventually bring.  The golf course certainly didn’t care who was first or best among us, or that we were even there at all.  And neither, really, would anyone else.  On that warm, sunny March day in the Pacific Northwest, with the mountains ringed around us, our particular Corps of Discovery found that in this case, “first” was really just another form of “best;” that such labels just don’t matter; and that a richer experience occurred for all of us, together, at a deeper level entirely.

One Response to “Spinning Records: Being Best, Being First, or Just Being?”