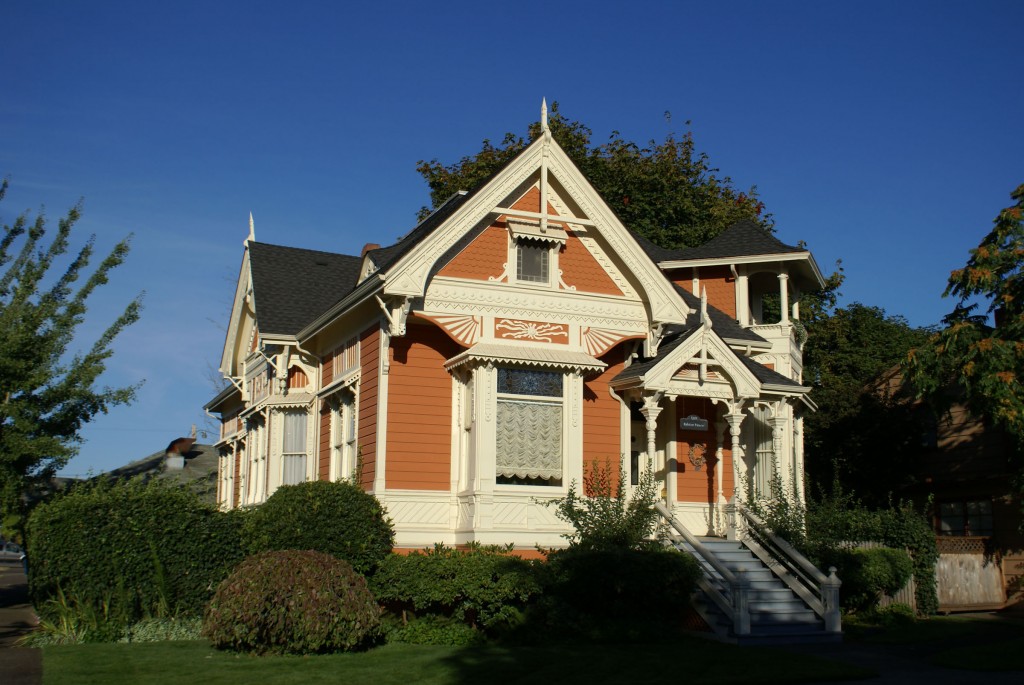 Driving too fast toward Portland along I-5 north, the jugular vein of Oregon travel, the signs for small towns accessible via smaller arterial roads and highways whip past in a green blur. Cottage Grove. Creswell. Junction City. Was that a deer in that field? Coffee would be good. An iced latte. Albany. Independence. Just how many zeros are in a zillion, anyway? Woodburne. Aurora.  Oregon City. And bam, you’re suddenly back in town as if those small burgs you passed don’t even exist.

One hundred and fifty years ago many of these roadkill hamlets (which is to say they were killed by newer highways such as I-5, built in 1957) were equals to Portland; a century and a half later, some retain a sepia beauty (think ghost signs on old brick buildings) that has not been dolled up by “gift shoppes” and other fluffy tourism hype. Their walkable neighborhoods are lined with muscular Craftsmans, dainty Victorians, and brick Carnegie libraries (though the libraries may now be bakery cafes). Covered bridges span lazy rivers on their outskirts. Quiet museums whisper stories of wild-bearded visionaries and visiting U.S. presidents. And the very vibe makes you nostalgic in a sort of crisp autumnal way for a simpler time that you never even knew.

Following are three I-5 towns worth detouring to— even if you don’t need an espresso and a pepperoni stick— for their turn-of-the-century architecture, small-town intimacy (don’t be afraid when strangers say hello), and just because you never knew they were right there all along. 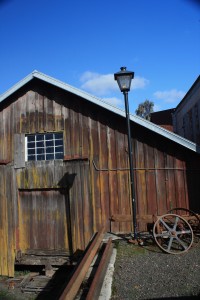 In 1856, a group of mostly German immigrants founded the Aurora Colony, the first cooperative community on the west coast. Members farmed, operated a sawmill, gristmill, and other businesses, ate, played in a widely beloved brass band, and performed virtually all other aspects of life communally. You can learn about this strange, short-lived experiment (the colony disbanded after 21 years, when founder Wilhelm Keil died) at the Aurora Colony Museum. In addition to cool archival photos, the museum provides living history demonstrations of yarn spinning, soap making, and other pioneer tasks. Ask to hear the antique music box that plays tunes on a cranked spindle using drums, bells, and castanets tapped by colorfully enameled metal bees and butterflies.  And look for Grover Cleveland’s signature in the guestbook from the local hotel.

Located along a western stagecoach line, and later the railway, Aurora’s Colony Hotel once boasted exotic German food and said oompah band playing on the roof. According to Mike Byrnes, owner of Aurora Mills, an architectural salvage store, and an amateur historian, “There’s the colorful side and the colorfuler side to town.”  He goes on to describe the old dance hall where whisky was rolled off the train during prohibition, and the funeral parlor that doubled as a whorehouse.

The hotel and whiskey are gone but the museum, a self-guided walking tour of historic homes, and a collection of nearly 20 antique shops clustered downtown are reason enough to visit this settlement where a sign outside one church reads “vacation bible school,” as if this isn’t an oxymoron.  Mike Byrnes’s shop is its own historical collection of house parts, architectural pillars, antique doors, and a Ferris wheel seat priced at $365. The Aurora Depot’s specialty is lamps and lighting—a cast-iron beauty with original glass hanging near the front door is listed for $2,500. At Timeless Antiques and Collectibles, browse rows of glassware including a wide variety of colored Depression glass. Many of the pieces for sale in town—from chairs to china— have come from old barns and houses throughout the nearby countryside. 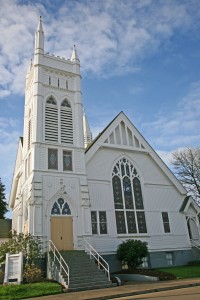 The Whitespires Church is one of the historic churches featured on many historic home tours in Albany. – Photo by: OJ Anderson

Once known as “Hub City” because of its location along rivers, railways and early highways, Albany is still a hub of architectural styles.  The Visitors Association provides a map and guide to the best of more than 700 edifices constructed in thirteen architectural styles and located within 100 square blocks in the Monteith, Hackleman, and Downtown Commercial historic districts. Along Fifth Street, for example, view the Alfred Schmitt House, a grand, columned Colonial Revival built in 1900; the Merrill family’s 1906 Queen Anne with multiple window shapes and a turret; and a Gothic Revival from 1878 supported by cement columns said to have come from the old courthouse. Other styles range from Pioneer and Federal to Art Deco. And whether or not you have anything to atone for, stop at the White Spires Church, which features stained glass windows depicting the River Jordan and the River Willamette created by Portland’s renowned Povey Brothers in 1891. 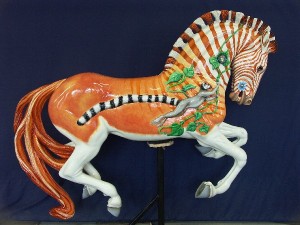 “Quigga” is a Quagga (an extinct breed of zebra), one of the 52 animals being carved for the carousel in Albany. Photo by OJ Anderson

The other highlight of an Albany visit might sound surprising if you’re not a particular fan of, well, carousels.  In addition to the Dentzel American Carousel Museum, downtown is home to an on-going community art project in which dozens of volunteers are hand carving and painting a menagerie of 52 fantastical, brightly-colored animals including an orange zebra ridden by a lemur swinging on green vines, and a salmon wearing a yellow lotus blossom.  The animals will soon chase each other in circles on a new carousel powered by a hundred-year-old mechanism when the project is completed.  If plans go well this startling showpiece will anchor a new district beside the river, close by to free concerts, shops, and eateries.

Between 1841 and 1866, more than 250,000 people began an arduous 2,000-mile trek from Missouri to Oregon City and other points west along the Oregon Trail. Today, according to one local, almost as many people who live nearby in Portland know almost nothing about this neighboring town to the south.

Oregon City is actually like three cities built on different levels: while the river-level downtown encompasses shops, offices, and a McMenamin’s brewpub located in the parish building of an old church, visitors might miss the best of what’s here if they fail to look up. One way to rise above downtown, literally, is on the free Municipal Passenger Elevator, built in 1915, which climbs 100 feet in 30 seconds and offers views of the lower city and river from the upper landing, as well as the feeling of being sucked up a giant metal straw. 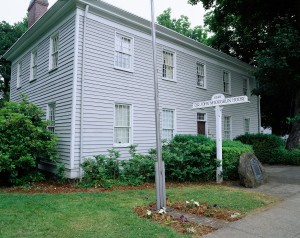 Disembark to stroll the McLoughlin Promenade, a park running along the top edge of the sheer drop above downtown. A walk to the far end brings you to the Museum of the Oregon Territories, the perfect place to gain an overview of local human history beginning a couple thousands years ago.

To experience more recent history than that of early Native Americans, stroll through the mid-level McLoughlin Historic District along leafy streets full of 19th and 20th century architecture ranging in styles from Bungalow to Vernacular. A handful are maintained as museums and invite a visit. Try knocking on the door of the 1908 Stevens-Crawford House, highlights of which include an end table that doubled as a commode . FYI— OC’s third level rises slowly away from the middle level historic district into rolling ridges spreading toward farms and forests and a pioneer cemetery worth strolling through.

But the biggest draw of Oregon City today is the same as it was in 1843: the end of the Oregon Trail. The 75-minute tour at the impressive, wagon-shaped Interpretive Center (currently closed) encompasses multi-media and living history presentations that clearly communicate what life was like aboard a bumpy Conestoga loaded with the entirety of a family’s possessions, or camped beside the trail on America’s most famous road trip —worth thinking about when you get back on I-5 to complete your own.

The Albany Visitors Association (250 Broadalbin St. SW, 541-928-0911, www.albanydowntown.com) provides a guide to historic Albany, which details walking tours in three historic districts.  If you’d like to peek inside one of the great houses, don’t sneak up to the windows; just visit in December or July, when local families open their historic homes to visitors. Tickets include drinks, entertainment, and horse-drawn wagon rides ( $TBD, 800-526-2256).  While touring downtown, spin into the  Dentzel American Carousel Museum (311 1st Ave. W., 541-967-4189) to view displays depicting the history of American carousels.  For a newer take, drop by the Carousel Studio (131 Montgomery N.E.) between 10-4 Monday-Friday to see what volunteers are currently carving for the new carousel project.

The Oregon City Visitors Information Center (1726 Washington St., 800-424-3002) will load you up with detailed information on everything to do and see in OC.  A perfect rainy-day outing would include two museums: The Museum of the Oregon Territory (211 Tumwater Dr., 503-655-5574, www.orcity.com/museum, $7) offers an overview from prehistoric times to the present.  The world-class End of the Oregon Trail Interpretive Center (1726 Washington St., 503-657-9336, www.endoftheoregontrail.org. $7) provides a detailed anecdotal history of Oregon’s first road trip.  And if you’re more interested in architecture than camping, stop in at the Ermatinger House and Living History Museum (619 6th St., 503-650-1851, $3).  It’s the oldest house in the county (built in 1845) and the location of the coin-toss that named Portland.