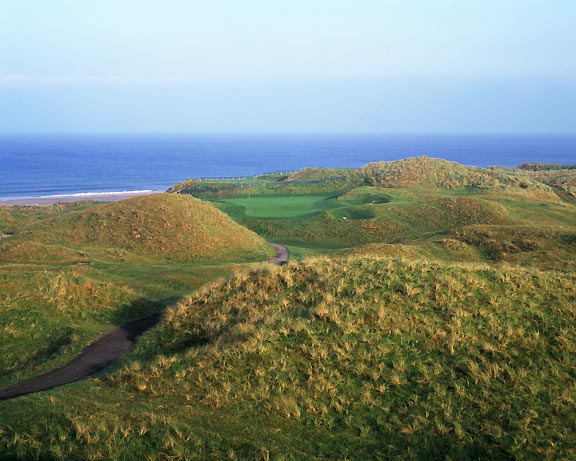 The last time I played Ballybunion’s Old Course– one of the world’s premier links courses– rain was falling so hard I barely looked out from under my rain hat.  Today our caddie rued the suntan he’d gotten on a day that must have hit 75 without a cloud in the sky. 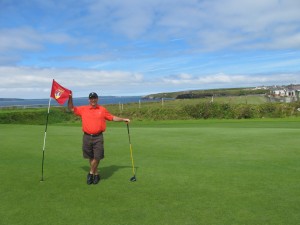 The author, who's shirt nearly matches the flat.

We started on possibly one of the best opening holes in golf– a graveyard protects the right side, quite literally meaning death for slicers.  To the left you actually have to drive the ball over another green, and the starter maintains control of traffic to prevent inadvertent injury.  Two more holes in the first six tee over other greens and rather than an annoyance it builds a sense of camaraderie among the passels of golfers who’ve come here from around the globe.  Ballybunion has an inexplicable attraction and builds a kind of joy throughout the round.  Part of this comes later, from the seaside holes, but even at the crowded beginning, being close to town, there’s a feeling of community, like you’re playing golf in a giant adult playground lacking only a tilt-a-whirl that dispenses Guinness.

At number three you first glimpse the bay and breakers in the distance– the 214-yard hole is protected by three pot bunkers and several dips and swales in front. 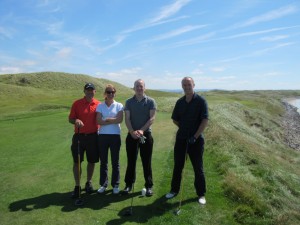 The quirky routing adds to the attractions.  Back-to-back par fives challenge at number four and five before number six turns directly toward the ocean, with a green perched on the edge of a drop-off down to the beach.  The green itself, like many here, has a soft side and a dangerous side– my surprisingly well-struck approach hit the wrong side, leaving a delicate pitch to the putting surface.

The seventh presents a difficult choice: tempt the water on your tee shot by taking the ball out on the edge of the sea and letting the wind blow it back to the left, or hit to the right and face an approach that risks flairing off right into breaking waves.

I played the course in the company of several other golf journalists as well as Rory Mathews– the other Irish Rory M.– a representative of the Irish Tourist Board.  We had many laughs, applauded great shots and rued bad breaks and bantered with master caddie Adrian Carr en route.

Number thirteen was perhaps my favorite hole on the course, a short par five of 476 yards that presents the greatest of golf dilemmas on the second shot: whether to lay up or carry a burn short of the green.  It precedes a par three that our caddie guessed that maybe one golfer every two weeks hits the green on.  And we left that opportunity to others.  Fourteen precedes another par three  that requires a stout driver to reach the putting surface.

We found Ballybunion Old to be eminently user friendly, especially compared to some of the other links courses we played this week.  The fact that it is difficult to understand exactly why it’s so good is just part of it’s charm.  But experts obviously agree, as the course is listed among the top 20 in the world. 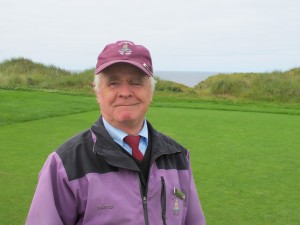 Finishing with the starter.