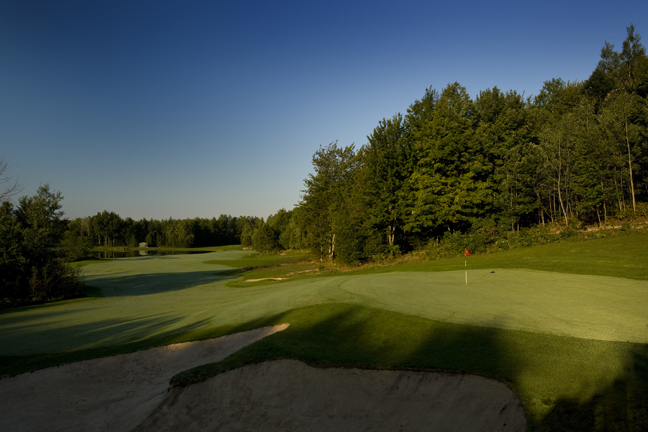 When I played golf with Tom Doak a week before taking on his Black Forest Golf Course in Gaylord, Michigan, he warned that if I could get through the first five holes without blowing up, the rest of the day would prove much easier and I might post a pretty good score.  But 7-5-4-7 is not my credit card PIN or the last four digits of my social security number: it’s the one par, one bogie, one double, and one triple that I recorded on the first four holes at Black Forest.  The good news?  I eked out a par on the 238-yard par-three fifth.  So take that, Tom Doak!

Despite a higher degree of difficulty than a few things I watched performed on the balance beam at the Olympics this week, Black Forest proved a fun if testing day.  Much of the trouble comes in the form of crazy lies even if you’ve delivered your ball into the middle of the fairway– most players don’t practice at ranges with up, down, and side-hill slopes, and so the shot demands here are just enough to transport you out of your comfort zone.

Number one also implies that positioning, even within the fairways, will prove crucial to success throughout your round– all three shots on the 524-yard par five must be delivered to the correct side of the fairway to ensure a clear path on the next shot.  The hole concludes with possibly the world’s smallest crowned green, reminiscent of something built back in the 1920s by Donald Ross or Chandler Egan.

On number two at Black Forest I kill a drive from the white tee and still have 220 to the green– or actually don’t have it, as there’s not a club in my bag that will reliably meet that particular demand.  But wait– more good news: a slope fronting the green means that on a dry day I might only need 190 in.  The bad news?  Black Forest has been over-watered within an inch of its life, making even medium-length holes feel like journeys out of The Odyssey.  And even the easy holes still somehow prove difficult– like the seemingly straightforward 166-yard par-three eighth, where the subtle green is virtually impossible to read by anyone less than The Great Carnac.  But this is difficult golf of the fun variety, and never seems unfair.  You WANT to hit the shots the layout demands, you know you can,  But sometimes you just don’t.

Black Forest is well named as the golf holes route gorgeously through the trees of a locale known as Wilderness Valley.  Few signs of humanity are visible throughout the day, and the course seems to hunker miles even from the clubhouse (so no walking).  And while we’ve been playing courses cut into trees all week here in the Gaylord area, this one does, in fact, seem darker and more foreboding.  The trees seem taller, and you’ll swear they begin to close in on you when you’re not looking, like the Ents in Lord of the Rings. 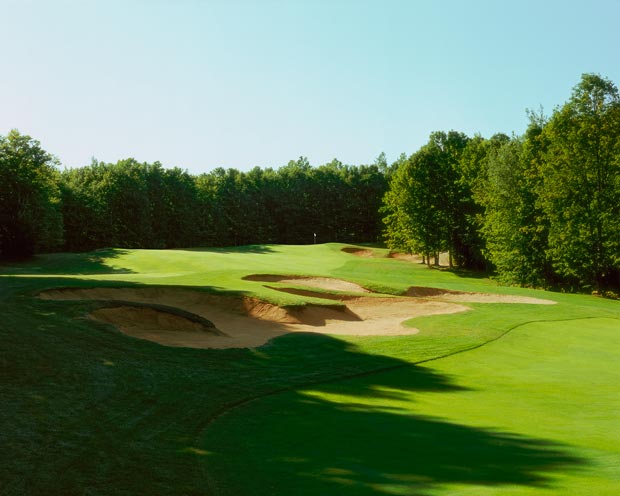 The par fives– of which there are three on the back– are a particular tribute to Doak’s design skills.  From the white tees all are eminently reachable in two shots, but you may be better off hitting driver, seven-iron, seven-iron if having even a snowball’s chance at birdie is still one of your goals.  On number ten, a mere 460 yards, you don’t even know from the tee that trees encroaching on the landing area conspire with other design elements and hazards to add difficulty.  At number eleven, Warrior Peter Kessler banged a great drive into the middle of the fairway yet had no real shot at the green, which seemed to duck behind bunkering guarding the putting surface around an uphill corner to the left.

The golf course finishes strong with pars of 5-4-5, all reachable, but the mood changes because two parallel fairways at 16 and 17 separated by an unexpected lake open the viewscape and don’t quite fit with the rest of the holes.

Black Forest was an early Doak design, and despite its penal vibe, the craftsmanship and strategic values of the holes are clear indication of the architect’s skill.  It’s like reading an early Hemingway novel like The Rites of Spring— while it may not be of Nobel prize quality, it’s a clear indication of the talent of the artist, and what he’s capable of producing in the future.