Today the Golf Road Warriors hit the road– Route 17 south, that is– from the Litchfield Beach and Golf Resort  for our morning round at Pawleys Plantation.  The moment you drive through the gate at Pawleys you feel you’ve entered a private enclave of upscale good golfiness, and pulling up to the bag drop only reinforces this view.  Attendants whisk your bag off to a cart or, as in my case this morning, hunted around the cart barn to find me a pull-cart so I could walk the lowland layout without having to pull a Dave Gould and haul my bag on my back.  And thus focus more on the beauty of the moss-draped oaks, coastal palmettos, salt marsh, and other attractions of the course.

After a few swipes at balls on the practice range we embarked upon the day’s golf journey, which if it had a movie trailer might have been narrated thus: “Jack Nicklaus’s Pawleys Plantation Golf and Country Club– where you’ll see at least a few of your favorite golf balls for the last time.  This piece of golf artwork from the creator of such beloved courses as Dove Mountain and Punta Mita will take you and your compadres on a golf journey you’ll always remember. You’ll laugh.  You’ll cry.  You’ll hit three Titleists into the marsh.”

And hit into the marsh we did– and into bunkers, forests, lakes, and other areas dangerous to golf balls.  And loved it.

We were amply forewarned that we’d face one of our toughest tests on the Grand Strand yet somehow still insisted on playing from the blue tees.  At first.  And now we are the middle-aged poster children for the Tee it Forward program, which we signed up for the nano-second we arrived on the tenth tee.  But that was later . . .

From the outset, the meticulously crafted and lovingly maintained golf holes demanded attention and precision.  Although Jack writes in the yardage book “I like to start my courses with a hole that’s not to intimidating and allows the golfer to begin with a good feeling,” he’s only half right if he is really talking about Pawleys.  Because the opening drive must be hit hard and with precision over a large marsh and then land between a tree loitering in the fairway on the left side and a whole mob of  other trees to the right.  About 150 yards from the green of this 511-yard par five a gigundo waste area runs along the entire right side to a green half tucked behind it.  On the l o n g second hole (441 from the blues) the second shot seems impossibly narrow, with both water and sand guarding the green.  My third and fourth shots to this putting surface were no less difficult.!

Trees and lakes make strategic cameos through the golf round and dictate much of the shotmaking.  Greens are often shallow and protected by bunkers in front, requiring high shots that drop faster than the NASDAQ on a bad day.  The putting surfaces themselves are in most cases an oasis of respite and you may find yourself running up to them with all the glee of children playing tag and grabbing onto home base.

I in no way blame Jack for my poor performance on the front nine but I knew I needed to make a change and shake up my game so I challenged fellow warrior Bob Fagan to a nine-hole match, possibly the dumbest decision I made all day, although there are plenty of other candidates.  Fagan claims a 10 handicap, though he managed to scramble his way to a 75 yesterday.  At least I guilted him into giving me a stroke.

And as I knew would happen, even with a mere dollar on the line I made my first par of the day and then four more in a row, including one on one of the toughest par threes I’ve ever had the pleasure of knowing.  But more on that in a moment.  On the par-five eleventh hole, a tree in the middle of the fairway on the second  determines most of what happens afterward– anything hit to the right requires an airlift over the tree.  I ripped two down the left side and thought I might have gained an edge on Fagan, but he hit a high floater to about three feet.  I punched a wedge to about twelve feet but missed the putt and he drained his for a birdie.

On number twelve the excitement began building, not just because I won the hole with a crisp shot from the fairway bunker snaking for about fifteen miles on the right side, followed by an up-and-down for par.  It’s because we finally reached the marshland holes that define Pawleys Plantation and offer one of the most unique playing fields in golf.  We’d been told by many people that the chances of hitting the green on the 168-yard thirteenth were about as good as winning the Nigerian lottery (no wait, I already won that six different times this month!).  The green appeared to float out on the marshlands surrounded by rippling grasses– rippling because a two-club wind was blowing sideways across the hole.  And yet I somehow made the correct club selection, chose the right ball flight, aimed at the correct part of the green and drew it into the wind to slow the momentum of the extra club I’d taken, and landed it seven feet from the pin.  I made par but at least won the hole from Fagan. 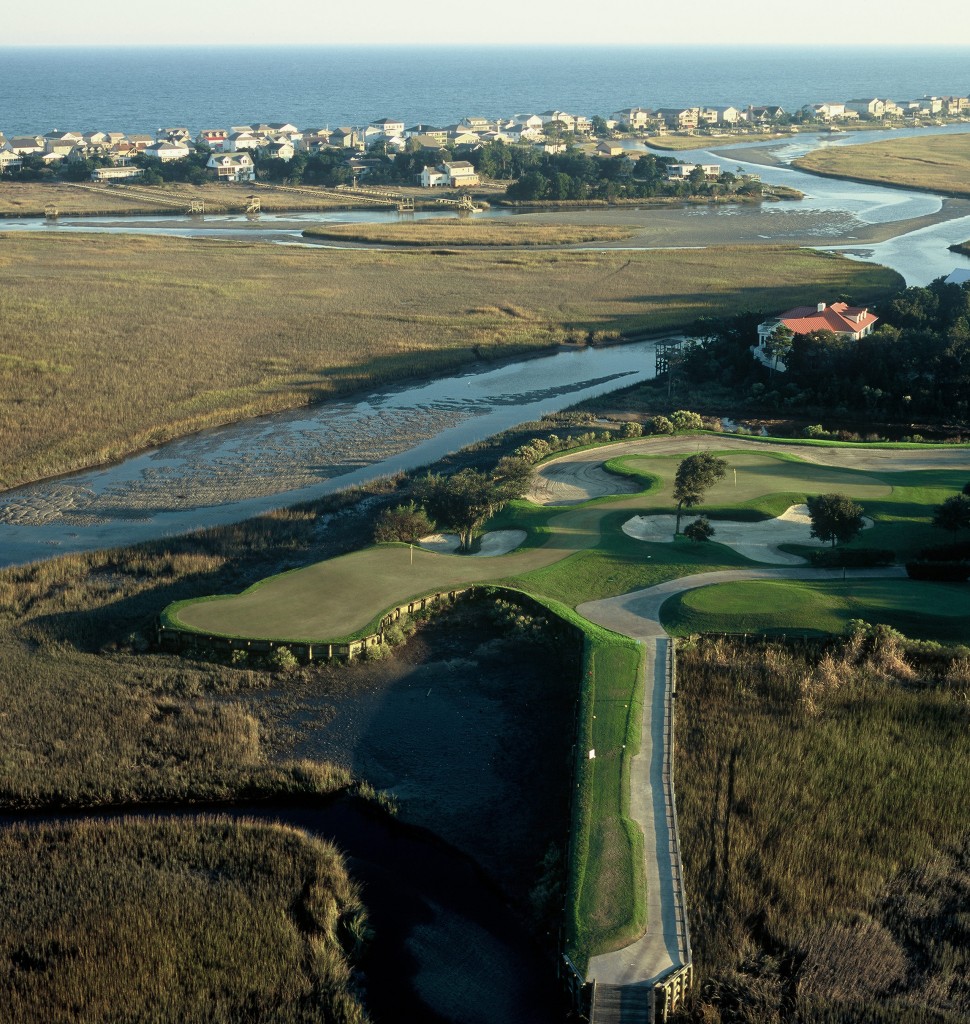 The next hole also played across the marshlands– a par five that was certainly dramatic but almost overly difficult, with a solid carry required off the tee and a far more burly carry needed to reach the green 525 yards from the starting blocks.  The draw I called up  to bring the ball back in from the marsh failed to fully materialize on my second shot and I made double and lost the hole.

Fifteen surprised us by moving back into the forest, which disappointed us a little until we realized we were  headed for the marsh again coming into the sixteenth green.  Seventeen presented another testing par three over the wetlands with a shallow green that I somehow managed to hit, while Fagan launched one over and left of the putting surface but landed just far enough from a tree to have a shot.  I three-putted but after hitting a pitch to close-in Bob three putted for what may have been the first time in his life, leaving me one up going into eighteen, where he managed a workmanlike par to push the match.  No money changed hands today.  But once I get my three or four lost golf balls back from Jack Nicklaus I’ll be ready to take on another warrior tomorrow.

What I should have done after golf was book a little personal time with Mel Sole, the well-known South African golf instructor (and former partner with Phil Ritson) who operates the Phil Ritson-Mel Sole Golf School at the far end of the Pawleys Plantation driving range.  Sole has worked with TOUR pros such as Gary Player, David Frost, and Curtis Strange, and was also mentor to a guy named Leadbetter.  The winner of countless awards and accolades, Sole is a charming, hands-on, approachable instructor who may help you win your next match against Bob Fagan.