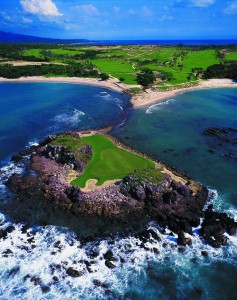 Tail of the Whale, Hole 3-B at Punta Mita's Original Nicklaus Course

Rumor has it that no man is an island, although a fellow named Gilligan made a career out of living on one.  Golfers, too, are occasionally faced with the challenge of safely landing on an island without getting lost at sea (or at lake, or stream).  The following golf courses all feature a putting surface surrounded by the wet, blue stuff.  At least when you’re lining up to make birdie, you can be assured that all putts break toward the water.  Try to “sink” the putt, and not your tee shot on these testing island greens.

In the Ozark Mountain foothills outside Springfield, Missouri, Island Greens Golf Club is true to it’s name at the 15th-hole, which plays from 125-200 yards from five elevated tee boxes offering different angles of approach to the water-bound green.  Jerry Slack designed this 7,005-yard venue with Bermuda tees and fairways and bent grass dance floors set amidst rolling hills. www.islandgreengolfclub.com.

Golfing a lot of Rot

South of Frankfurt, Germany, St. Leon-Rot Golf Course has hosted the Deutsche Bank-SAP Open—appropriate since the course was created by SAP software mogul Dietmar Hopp.  Don’t think about hopping a shot onto the seventh green of the Rot course, which is surrounded by water.  Liquid assets come into play on half the holes, and environmental areas create additional lateral hazards.  www.golfclub-stleon-rot.de.

Pete Dye’s Stadium Course at the TPC Sawgrass in Ponte Vedra Beach (inland from Jacksonville, Fla.), is home to the mother of all island greens at number 17.  The 137-yard shot is among the toughest in golf—as attested to by the 100,000 golf balls retrieved from the lake each year.  But don’t  feel too bad if one (or more) was yours: at the 2007 PGA Championship, 50 balls ended up taking a dive—in a single round.  www.tpc.com/sawgrass.

Close by to Sawgrass, the original island green golf hole taunts players at the Ponta Vedra Inn and Club.  Herbert Strong designed this oft-copied challenge in 1928 on the Ocean Course, which would have hosted the 1939 Ryder Cup if WWII hadn’t intervened.  The island itself—157 yards from the tee— is edged by palms and peppered with bunkers.  www.pvresorts.com.

Tracks of Your Tears

In Bend, Oregon, three hours from Portland, Lost Tracks Golf Club features an island green that’s as interesting for how you get to the putting surface as for the birdie (or bogey) putt you might or might not have.  Golfers walk on (okay, over) water via a 1947 railway car decorated with period furnishings and hung with hundreds of bag tags left by visitors from all over the world. www.losttracks.com.

Dye repeated his evil formula at the Stadium Course at PGA West, in La Quinta, CA, outside Palm Springs.  On the 17th, known fondly as “Alcatraz,”  Lee Trevino earned a get-out-of-jail free card during the 1987 Skins Game when he aced the hole to win $175,000.  Sportswriter Jim Murray once said of the course, “You need a camel, a canoe, a priest, and a tourniquet to get through it.” www.pgawest.com.

The only floating green in Asia can be found at Amata Spring Country Club, 45 minutes from Bangkok.  The 7,400 yard course features lakes, rivers, mountain views, elevation changes, and the 145-yard par three 17th, an island if not of tranquility, then at least of safe refuge from penalty strokes.  www.amataspring.co.th.

Don’t Lose a Fin to Your Golf Chum

An island designed by a shark doesn’t, at first, sound like a very good idea.  But Greg Norman (“the Shark”) created a tasty island golf green at number nine on Blue Tip, at the Ritz Carlton Grand Cayman.  The hole plays 156 yards but wind may vary club selection by 4-5 clubs. www.ritzcarlton.com.

Just west of Spokane, WA floats the original movable floating green at the Coeur D’Alene Resort, in Idaho. The 14th hole can play from 100-175 yards depending on where they move (by computerized cable) the 15,000 sq ft 5,000,000 lb target.  Players board a sleek wooden boat to be motored out to their birdie (or triple bogey) putts. www.cdaresort.com.

Don’t expect to make the birdie putt on hole 3-B at Jack Nicklaus’s Punta Mita Golf Club, located at the Four Seasons Resort north of Puerto Vallarta, Mexico; the green of this extra hole (it doesn’t count in your round) is located on a natural island 194 yards off shore and can’t even be accessed at high tide.  The green is shaped like the tail of the whales that can often be seen nearby.  www.fourseasons.com/puntamita.