Chambers Bay arouses a toasty longing for other great courses you’ve played or seen or that exist in the collective golfing unconscious. Photo by John and Jeannine Henebry

Much like great music or literature, the best golf courses can ratchet up your emotions directly, but they can also create a rich nostalgia by stirring memories and feelings associated with other masterpieces of their artistic genre that you’re familiar with.  Chambers Bay, the new public course designed by Robert Trent Jones II outside Tacoma, Washington, immediately elicits intense, symphonic, even operatic tinglings.  At different moments the course resonates like a Mozart aria, a Hendrix guitar riff, an orchestra playing Wagner, and a crooning Hank Williams ballad.  It moves you directly with the sheer epic beauty of rolling grasslands pouring between wild mounds and tipping down toward the edge of Puget Sound in great green glory.  It amps you up with the potential heroics of golf shots that demand a pulling out of stops and a swinging out of shoes.  At other moments the course mellows you by keening mournfully like the melodic climbing and plunging of an Irish jig.

At the same time, Chambers Bay arouses a toasty longing for other great courses you’ve played or seen or that exist in the collective golfing unconscious.  Holes are not derivative but simply evocative in the same way as a purely struck Santana chord or a violin melody played by Isaac Stern.  Citing how this evocation works in another artistic genre, poet and golf course architect Robert Trent Jones, Jr. himself compares it to Proust being flooded with childhood memories by a piece of cake.

Chambers Bay’s overall character is Irish, connoting Ballybunion with holes tunneling between massive sandy ridges.  Amusing quirks (not the least of which is a train running past occasionally) speak with the Scottish lilt of Prestwick or North Berwick. You can’t help but compare Chambers Bay to the idyllic linkslands at Bandon Dunes six hours down the coast.  Certain aspects echo Nicklaus’s brilliant efforts at Old Works, in Montana, also a reclamation site.  And yet other views conjure Pete Dye’s artistry at Whistling Straits.  These tiny revelations alight fleetingly, without warning, and lend a component of happy reminiscence and surprise to playing the course.

For most of the past century, the current site of Chambers Bay was home to a gristmill, saw mill, and gravel mine.  When the property was abandoned some years ago it appeared as an unsightly gouge in the surrounding Northwest landscape of forested islands and distant views of the snow-capped Olympic Mountains.

Not only does the Chambers Bay Golf Course tell a triumphant reclamation story about turning a wasteland into a gorgeous asset; it also illustrates how a government can actually act in the best interests of its constituents.  The visionaries behind the larger Chambers Creek Project—which includes the golf course, parks and other amenities spread across 930 acres—were not real estate developers or corporate CEOs.  County Executives such as John Ladenburg, and other public servants such as county project manager Tony Tipton architected the concept of this brilliant walking-only public golf course that locals can play at a great discount because they funded it.

And in case you thought Chambers Bay might be missing any crucial angle of perfection, throw in that romance of the passing trains (which may at some future point stop at the property), boats plying the blue waters of the Sound (one day golfers may be able to arrive by boat), and even “ancient” ruins adjacent to the playing surfaces—in this case, the castle-like ramparts of huge sorting bins left over from the mining era.  Lastly, the course was envisioned to host tournaments—and not just for local sticks but featuring the big boys, playing from 7,600 tough, windy yards, in front of 40,000 fans.  Major tournaments—and by major, that’s exactly what I mean.  The USGA, which had been hoping to host the U.S. Open in this far flung but golfalicious corner of the country, has made a fine choice for the 2015 event.

Upon arrival, drive toward a clubhouse that seems perched on the very precipice of the continent.  Just beyond it, 200 vertical feet of earth have been clawed away over the past century, creating a concave topography recently crafted into massive dunes carved by raging rivers of green turf edged with acres of wild waste areas and hectic fescues, all punctuated by soft, sculpted, rolling greens. Seen from above, contrasts stand out.

Then you descend, confusing your notion that heaven is a place above us.  Below, the overall mood is of mystery as you appreciate the scale and intimacies of a site full of mounds and humps and hummocks, sideslopes and sheer drops, all drifting and tilting westward toward the gleaming waters of Puget Sound.  And at the very edge, a lone fir—the only tree on property— marks the transition where sand dunes drop down to the sea. 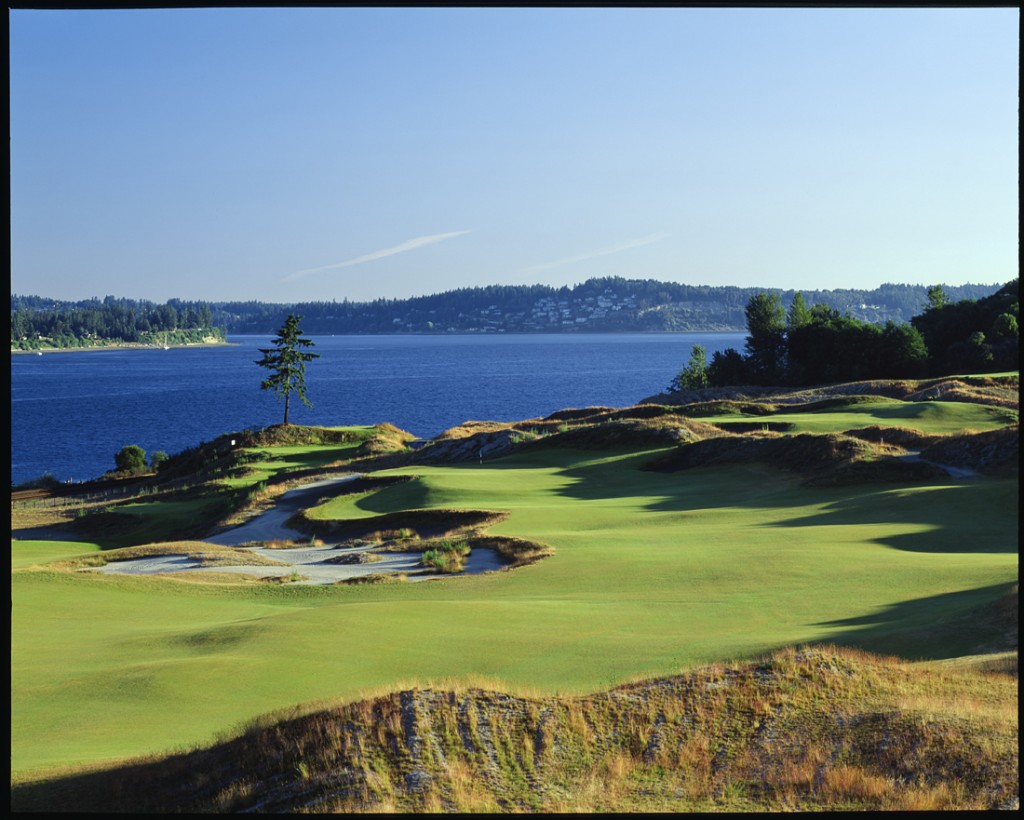 The golf holes themselves are sublime, each proffering choices and intricacies.  Fairways are huge, allowing players to swing with abandon.  Waste areas are as large as northeastern states.  Wind may suggest adoption of a ground game, but you can punch run ups or attack aerially or invent a hundred other creative ways to play these holes, which may seem different each time you confront them.  As Robert Trent Jones, Jr. says, “You can play more options at Chambers Bay than at the Chicago Futures market.”

There are few tee boxes in the traditional sense—just ribbons of fairway set with markers—which couldn’t be more different from the classical runway tees that characterized RTJ II’s earliest work. Jones describes the greens as “extensions of the fairways, not separate features.”  Neither is there much traditional bunkering—another sign that this design firm has been resuscitated by young talent, fresh corporate vision, and the enduring architectural poetry of Jones himself.  In fact, the architect reflects that the Chambers Bay project reminded him of his work on such other links masterpieces as Spanish Bay and Australia’s Cape Schank.  He gives much of the credit for the fine work at Chambers Bay to architect Bruce Charlton, the man behind many great Jones layouts, who was assisted by Jay Blasi, a talented 28-year-old with a very bright future.

According to Jones, the first hole at Chambers Bay offers “echoes of the Old Course at St. Andrews.  Numbers one and eighteen share a joined fairway that’s one big, grassy turfland.”   But Chambers Bay evokes St. Andrews in other ways, as well.  Jones continues, “In terms of community, the towns own both courses.  There are walking trails through both and both have a sewage plant adjacent to the course.  As a player of both courses your game and character are very much on display—everyone can see you and watch you play.”  In fact, many of the holes at Chambers Bay play close by to a public trail system where galleries gather—as they do at St. Andrews’s Road Hole and the eighteenth green— to give witness.  Jones also believes that Chambers Bay will help Tacoma the way the golf courses help St. Andrews—by attracting people and aiding in the town’s renaissance.

The brilliance and versatility of the design are both subtle and obvious at different times.  Multiple fairways on a number of holes serve up different views and shot values. Rather than prancing around the topography’s major feature as many courses do, and instead of teasing to build tension, the opening hole here plays right smack at Puget Sound.

Further on, number six green and surrounding humps reinforce the course’s Irish pedigree.  Number seven presents a sort of neo-classic Cape Hole bending right around a huge waste area and presenting two huge waste mounds in the fairway fronting the green, creating some blind approaches depending upon where your drive lands.

Jay Blasi calls number eight “possibly the longest hole in the world without a bunker.”  The fairway is a 602-yard expanse of grassed mesas tucked between steep sideslopes—the upper left slope helping balls back to the fairway, the lower right hustling them away forever.  The front side ends with the most epic hole on the course—a terrific par three of between 132 and 227 yards with a drop of over 100 feet over a ravine that looks like something out of Middle Earth.  The sculpted half punchbowl green floats above a huge waste area and falls off in the back to serve up views of Mount Olympus.  Do not look back from the green to the tee if you’re prone to vertigo.  And keep an eye out for hobbits. 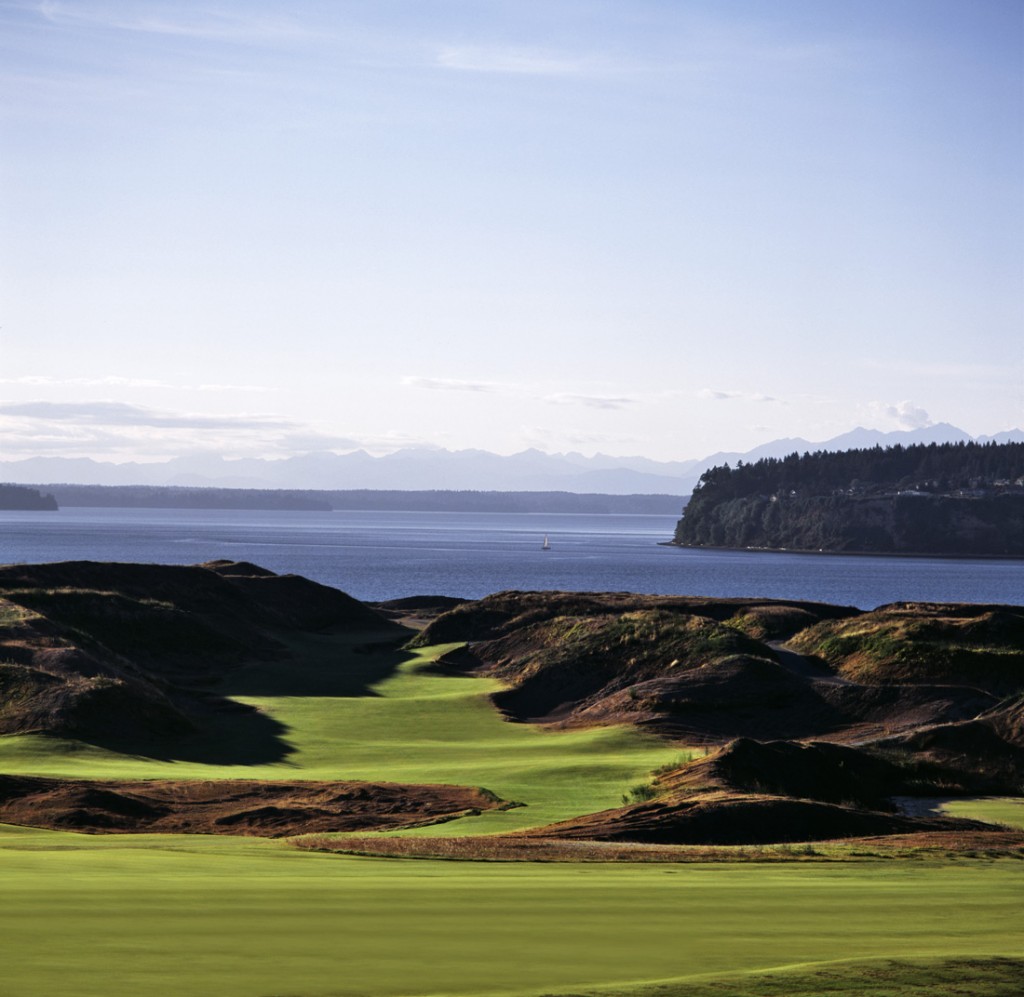 The back side opens with a perfect and perfectly Bandonesque par four that narrows as it climbs uphill toward the green between two massive dunes that close in like the walls of a canyon. Jones calls the hole, with it’s manufactured dunes “one of my master works.  It plays into a tunnel like an uphill version of Spyglass number four—the view is wide open with the sea in the distance yet it still feels claustrophobic.” Number twelve presents the ever-loveable drivable par four—but in this case you’ll need to crush a blind shot 300 yards uphill to the largest but craziest green on the course.  At number thirteen the layout assumes an openness that allows for some calming breaths and expansive views across the entire golfing grounds.  Rest while you can.

The finish is both unusual and strong, with two par threes and a par five coming in the final four holes.  Number fifteen presents a 175-yard downhill par three with a pot bunker left, a huge bowl o’ waste area, and the layout’s lone tree and Puget Sound beyond.  Seventeen is a long par three that will usually play into the wind and that can stretch to 240 yards over snaky waste areas with a narrow opening to the green.  Eighteen departs from the edge of the water beside ancient mining ruins and disappears into the Irish distance beyond curving waste areas where leprechauns surely frolic.

RTJ II risked several innovative techniques in designing Chambers Bay.  The firm left deep tire ruts in much of the constructed mounding to hold grass seed and water because those areas of play are not irrigated.  Nature will shape and weather these dunes as it sees fit.  The sort of post-industrial look can appear very cool or utterly alarming, and only time will tell whether thickening fescues will soften these lines as intended.  The company also designed holes five and six so they can be played as either long or short holes depending upon which of two greens is in play on five (which determines which set of tees you play from on number six), thus lending the course additional flexibility.  And although it’s a walking-only course, Chambers is no walk in the park, with several steep climbs and descents that could  lead to slow play—hence an active caddy program.  Surely the superb management of KemperSports will address any problems that arise.

No real estate will ever mar the landscape at Chambers Bay, though future plans may include lodgings and even a second golf course.  But that’s an encore that hasn’t yet been played.  So hold up your lighter, cheer wildly, and hope for another rousing song. 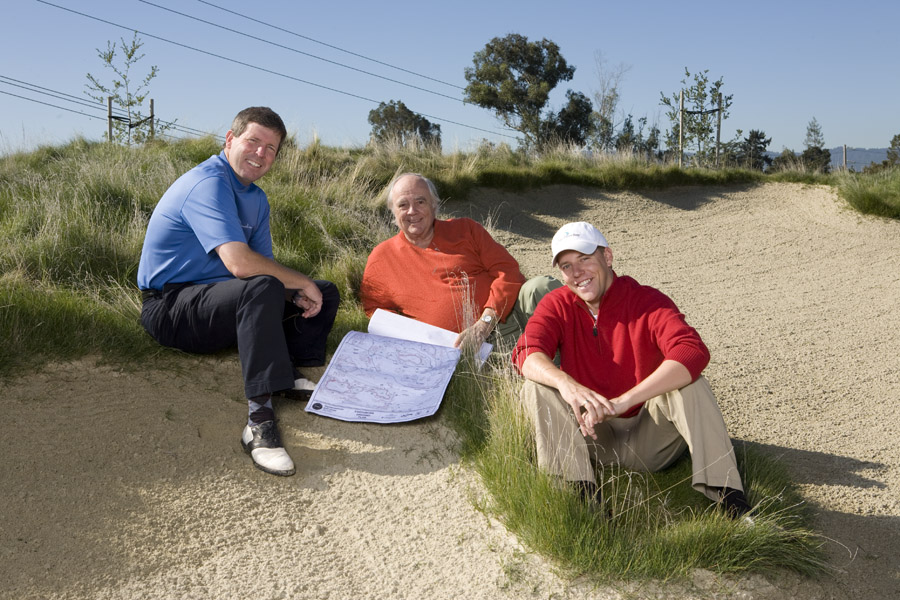