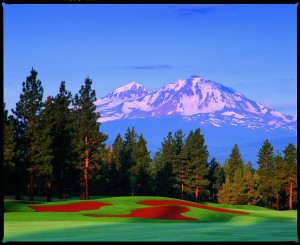 As if one type wasn’t enough, golf course architects mine their layouts with a wide variety of sand-filled hazards including framing, target, pot, waste, and cross bunkers.  Pros, the conventional wisdom goes, would rather play out of a bunker than thick rough, but most average players find these penal pits more frightening than Sandy Duncan.  Here are nine reasons to consider carrying a shovel as your fourteenth club.

Put Me Down For an Eight

Several hours north of Calgary, Alberta, Jasper Park Lodge is home to one of the world’s great mountain golf courses, designed by Stanley Thompson in 1925.  Demonstrating either a subtle humor or the effects of too much whiskey, Thompson designed the bunkers along the tenth hole in the shapes of a variety of sea creatures, including a 40,000-sq-ft octopus with outstretched arms.  www.jasperparklodge.com.

Possibly the most well-known bunker in North America—the Church Pews– resides at Pennsylvania’s private Oakmont Country Club.  But unless you qualify for a US Open, you’re unlikely to test yourself in the 102 yards of sandy mayhem interspersed with turf islands aligned to create hellacious lies.  Head instead to Northern Bay Golf Resort, 85 miles north of Madison, Wisconsin, where you can hit into a perfect replica of the hazard—and play replicas of other famous holes, as well.  www.northernbayresort.com.

Golf architecture aficionados consider it a Mickey Mouse design tactic, but the par three sixth hole of Joe Lee’s Magnolia Course at Walt Disney World in Orlando, FL features the “mousetrap” bunker in the shape of the famous cartoon character.  Some may relish an explosion shot out of here.  www.disneyworld.disney.go.com.

Tom Fazio’s Green Monkey Golf Course, at the Sandy Lane Resort in the Bahamas, carves through a quarry and features elevation changes dizzying enough to knock you out of your tree.  The green at number sixteen on this track named for indigenous Bajan monkeys, is protected by a bunker containing a grass island in the shape of  Bonzo.  www.sandylane.com.

At the Four Seasons Resort and Club, outside Dallas, Robert Trent Jones, Jr. and Jay Morrish designed the green on the first hole in the shape of Texas.  It was only fitting that the bunker beside it replicate Oklahoma and the water hazard represent the Gulf of Mexico.  The 7,120-yard layout hosts the Byron Nelson Championship.  www.fourseasons.com.

On the third hole of Prestwick Golf Club, tucked between the Glasgow Airport and the Sea, awaits the Cardinal Bunker, one of the most infamous in golf.  The vast sand pit lined with railroad ties and bisected by fairway turns a short par five into a philosophical dilemma of when to storm the beach.  Prestwick was home to the first Open Championship (British Open) in 1860.  www.prestwickgc.co.uk.

Motorists and golfers outside Plymouth, MA may be sucked toward “the black hole,” a 30-ft-deep bunker at Waverly Oaks Golf Club, located along Route 3 between Boston and Cape Cod.  Architect Brian Silva hung the ball-attracting galactic doombringer on the edge of an even deeper green-fronting ravine along the par-three seventeenth.  waverlyoaksgolfclub.com.

The Sound of One Hand Putting

Just outside Las Vegas, The Revere Golf Club’s Lexington Course provides a paean to the idea that golf is a “Zen” sport.  The 625-yard 11th hole features a green and bunker complex designed in the shape of the ancient Oriental yin/yang symbol.  The two dots punctuating the tear-shaped components of the symbol are represented by the hole itself, and a round pod of grass set within the bunker.  www.reveregolf.com.

Consider carrying one of those tiny seafood forks instead of a sand wedge when visiting the Cedars at Dungeness golf course northwest of Seattle.  The 483-yard par-five third hole is protected by a bunker in the shape of the local and tasty Dungeness crab.  This walkable Jack Reimer course is located in a dryish (compared to Seattle) “banana belt” on the Olympic Peninsula.  www.dungenessgolf.com.