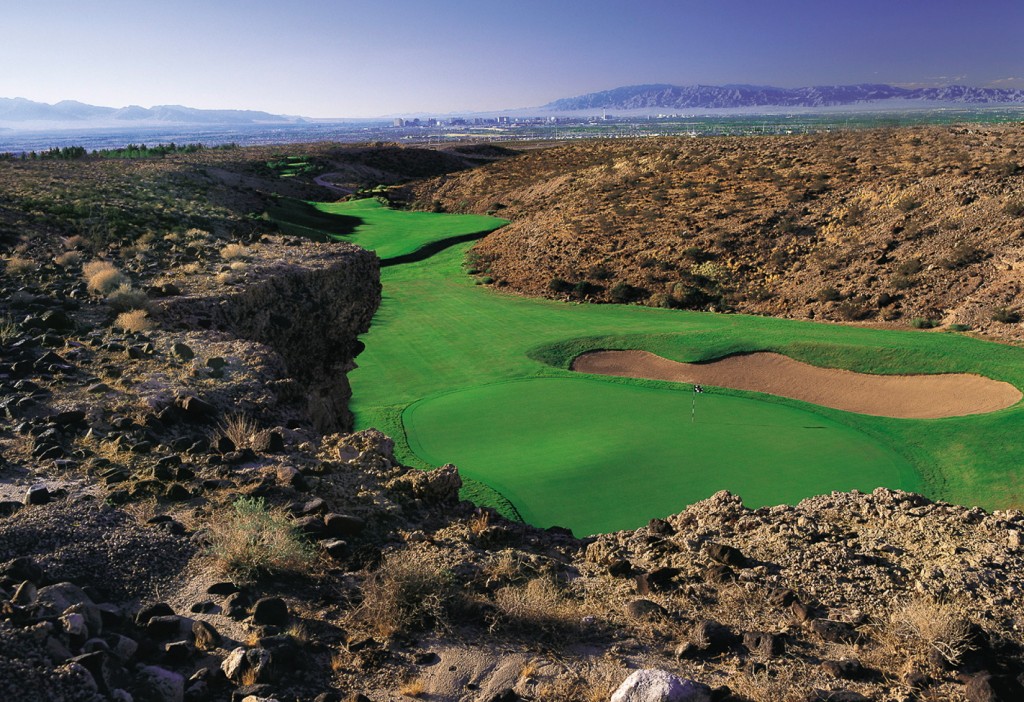 Here’s today’s geography quiz: as you tee up your golf ball, you look out over yucca, creosote bushes, and other western American desert flora.

In the distance, however, you notice the black outline of an Egyptian pyramid silhouetted against the blue horizon.  Beside it, the buildings of New York’s skyline crowd together like uneven teeth.  Not far from the Chrysler Building, Arthurian knights battle within medieval castles, Caribbean pirates clash swords aboard ship, and Roman gods come alive atop ancient ruins.  Where are you?

If you answered ‘Las Vegas,’ you advance to the bonus round.  If you said something like, “Right here in Joe’s Tavern!” it’s time to step away from the bar.

Yes, of course you’re in Vegas, where fantasy is a way of life.  And if you’re lucky, you’re teeing that golf ball up at Rio Secco Golf Club, a perky Rees Jones layout owned and operated by the Rio All-Suite Hotel and Casino/Harrah’s Entertainment.

In a town that does everything in a big way, the Rio is the hotel that put the ‘mega’ in mega-resort, and raised SERVICE to a word with all upper-case letters.  The hotel encompasses more than 2500 rooms– all suites of at least 600 sq. ft. (and up to 16oo sq. ft.), many with views of the Vegas strip through windows that are tinted so you can stand there naked if you feel like it, though I don’t really want to know.  The hotel also offers nine Palazzo suites for high rollers, as well as plenty of other facilities.   And oh yes, the Rio also currently offers 9 restaurants serving everything from Indian to Italian cuisine, 120,000 sq. ft. of gaming, and 20 unique shops set in a Tuscan village where every two hours a parade of entertainers sings and dances on moving floats suspended from the ceiling.

Still, the Rio’s niche among Vegas hotels is as a purveyor of great food.  While the hotel’s various eateries have received scads of accolades, the current showpiece is the down-home Martorano’s, serving South Philly Italian cuisine such as a spaghettini fra diablo and a meatball appetizer that Gourmet magazine claimed “may be the best meatball in the world.”

The Rio’s golf course, Rio Secco, is purty darn meaty, too– on character, challenge, beauty, and forced carries.  Originally planned as part of a housing development in nearby Henderson, the builders ran out of money after selling the lots but before building the golf course.  The Rio bought and built the course and accompanying facilities for $36 million, leaving residents with the impression that they were now living along unfairways.  Although they’d expected free club memberships, they must now pay a hefty greens fee to play a round of golf.  All of which I mention simply to explain why perfectly nice-looking retirees might stand out on their decks and give you the finger as you line up an approach shot.

Guests of Harrah’s properties, however, receive a discounted rate at the golf course.  While you’ve got your credit card handy, you might also consider instruction at Rio Secco’s Butch Harmon School of Golf, starting at $1,800  for state-of-the-art one-day  instruction packages, and ranging up to $5,900 for packages taught by the master himself (packages include lodging and other features).  Lessons with the top-notch staff other than Butch start at $200 per hour.

Costs and bird-flipping locals aside, the Rio Secco Golf Club is as fabulous as all get-out.  With six plateau holes, six canyon holes, and six holes winding through broad desert washes, there’s no shortage of startling variety.  The course stretches to 7332 from the tips, plays 6375 from the whites, and its 240 acres in the foothills of the Black Mountains encompass two acres of lakes, 92 acres of grass, and 88 traps.  The rest is desert: you do the math.  Fairways, tees, and rough are all Bermuda, and the immaculate greens are God’s own perfect Bent grass.  Rees Jones says of his layout, “The canyons created spectacular cathedral holes.  The plateau offers holes that allow golf shots to hang over the city of Las Vegas.  The final holes, located in a river bed, provide a beautiful crescendo for the round.”

Well said, Rees!  And it’s not just hype, although Jones fails to mention that the course is definitely not for the feint of heart– or driver.  No question about it, hackers will suffer here.  But decent players, or those who don’t care about score or lost balls, will rave about this excellent and unique venue.  They may also rave about Rio Secco’s T-Mates program, in which a girl far more beautiful than most golfers would ever deserve joins players on a round as a combination hostess, concierge, and caddie for $200.  Chances are they can probably putt better than you, as well.

Sure, the layout opens with a short, friendly hole, but by number two it becomes a Vegas thrill ride, abandoning all efforts to lull you into relaxing.  This par four requires a daunting carry over descending tee boxes and desert, and plays 475 yards from the big-boy tees.

So concentrate on the purple, orange, and yellow desert flowers.  Notice that the course has nary a spike mark and hardly a divot.  Enjoy the lovely views and crisp, dry air.  After several more forced carries, you’ll reach the delightful 7th hole, which begins from extremely elevated tees aimed at a visually tricky landing area.  The approach is played into a natural caliche amphitheater that brings to mind a similar hole designed by Robert Trent Jones, Jr. on Barbados’ Royal Westmoreland course.  Just in case you were scoring well up until now, Rio Secco’s front nine ends with two par fives.

The tenth hole begins with a shot that must reach toward the Stratosphere (the hotel, not the cosmic zone).  Number twelve will rocket your pulse rate with a required launch over a ravine so steep that the echo of your tee shot may startle the group behind you when they eventually reach the tee.  Cunning design here allows the ladies to choose a direct route to the hole that crosses sand the entire way, or opt for a grassy bail-out to the left.  As lovely as this hole is, a front pin placement makes it patently impossible for even the most manly man; the green slopes steeply from back to front– the only design flaw I encountered all day.

Holes sixteen through eighteen play over and around blue lakes and in view of the stately clubhouse, providing a feeling that you’ve commenced your desert journey and returned to civilization– at least until you drive back to Vegas.

Odds are excellent that you’ll love your visit to the Rio.  Like just about everything else here– from poker to sporting events to the latest on the Tiger Woods scandal– you can  actually bet on it. 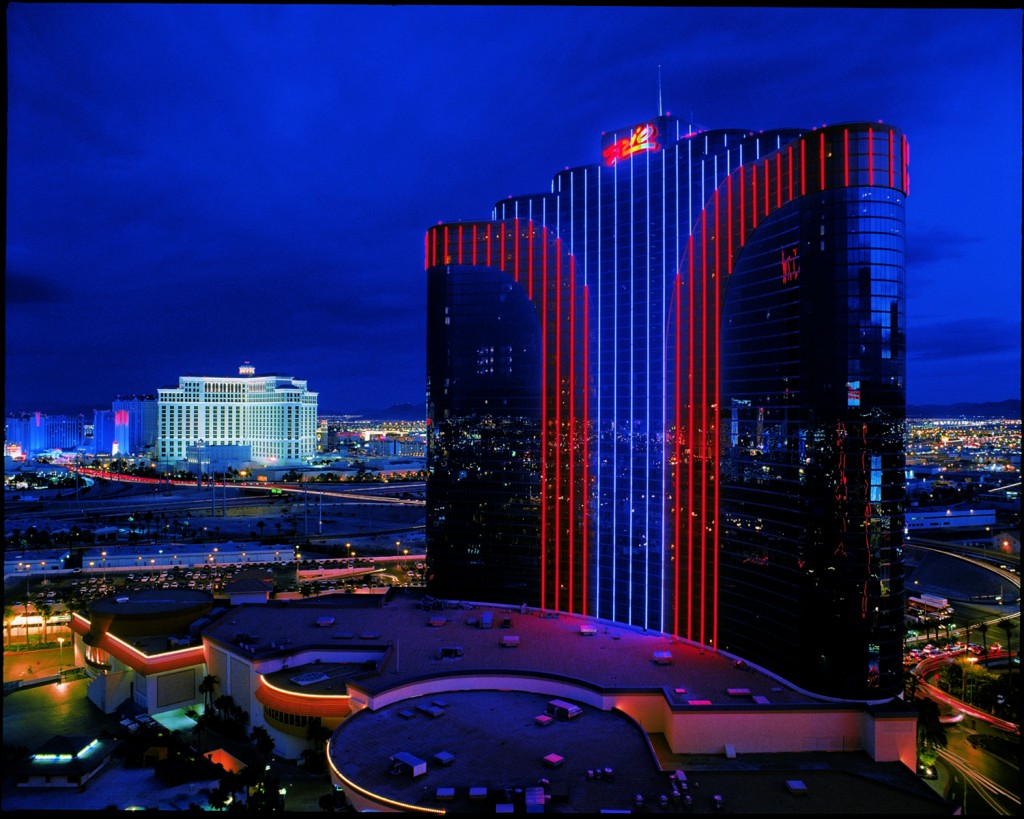