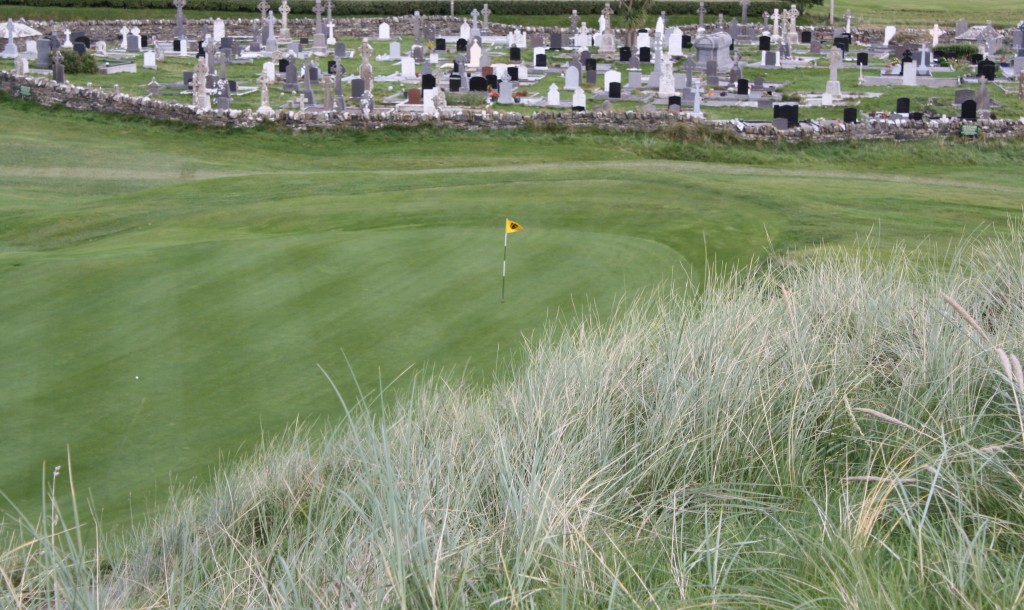 Ballybunion has buried a lot of golfers. Photo by Andrew Rice, www.andrewricegolf.com.

Jack O’ Lanterns and skeletons may be plenty scary, but they’re not nearly as frightening as standing over a two-foot putt with a match on the line.  October is a great month for golf in many locations, especially at these venues with haunting themes and backgrounds. For further inspiration you can watch Boo Weekley on the Tour, and perhaps announcers will mention friendly ghost, Billy Casper.

Scaring Up a Game

A Spell of Bad Putting

In Jamaica, the White Witch Golf Course is named for Annee Palmer, a 19th-century plantation owner who supposedly cast spells and killed three husbands.  She has not been directly linked to a case of the shanks.  This Von Hagge/Baril mountain design plays over ravines and hollows across the mountains of the Rose Hall Sugar Plantation.  The course is part of the five-diamond Ritz Carlton Golf and Spa Resort.

Drop it in the Hole

Just outside Indianapolis, Coffin Golf Club gives new meaning to the phrase “nailing it” off the tee.  This 6,789-yard Tim Liddy design opens with a par five and features back-to-back par fives on the back nine.  The narrow fairways play between mature trees and beside the winding White River en route to bent grass greens.

Ghost of a Chance

South of Manchester, England golfers at the Church Stretton Golf Club have long reported that a ghost has been stealing golf balls—appropriately enough on the 13th hole.  Players describe hitting balls clearly to the middle of the fairway and then walking out to find their balls have disappeared.  The hilly, wind-blown century-old course also overlooks moody ruins from the Roman era.  Harry Vardon and James Braid both worked on the course design.

Sixty miles from Manchester, NH, golfers can light it up at the Jack O’ Lantern Resort.  The Robert Keating design in the heart of the White Mountains dates to 1947.  No local course can hold a candle to the 6003-yard layout’s views of Franconia Notch and an authentic New England covered bridge.

On a Hot Streak

East of Newport News, Virginia, the golf is hot at Hell’s Point Golf Club, a Rees Jones design that was ranked by Golf Digest as a best new course and by the American Society of Golf Course Architects as one of the top 100 designs in the US.  Tricky angles, lakes, and 61 bunkers place a premium on strategy, not length on this venue winding through hardwoods and Virginia Pines.