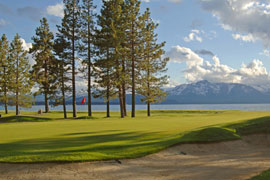 What can I say about Lake Tahoe—“the jewel of the Sierras”– that hasn’t already been said . . .  except maybe Hoo-chee Mama! Yabba Dabba Do! and Katie bar the door!  Formed 5-10 million years ago by shifting faults that pushed up surrounding mountains (but through no fault of it’s own), and by volcanic activity that dammed the Truckee river, the stunning, almost too-blue lake’s average depth is nearly 1000 feet.  The pristine waters are so clear that you could see a golf ball 75 feet below the surface—and if you do, it’s probably one of mine.  Twenty-two miles long by twelve wide, and with 71 miles of shoreline, the lake holds 39 million gallons, or nearly the amount of Diet Coke that John Daly quaffs during a TOUR event.

The peaceful Washoe Indians had the place to themselves until John Fremont, guided by forecaddie Kit Carson, “discovered” the lake in 1844.  A decade and a half later, the Comstock silver lode was dug up nearby, and all hell broke loose.  By the 1890s the miners had moved to San Francisco to start a football team, and rich city folk began visiting Lake Tahoe for recreational purposes.  Resort development picked up in the 1950s, and surged when the winter Olympics were held at Squaw Valley, on the north side, in 1960.

The land that would become Edgewood Tahoe golf course had been a Pony Express and Wells Fargo stage line stop when the Park family bought it in 1896 and began running some very lucky cattle in the meadows beneath the pines beside the lake.  A later, more insightful Park hired architect George Fazio to build a golf course on the site in 1968.  Fazio’s nephew, Tom, has kept the work in the family by touching up the layout over the years.

In 1980, Edgewood Tahoe hosted the first USGA event ever played in Nevada—the US Public Links Championship, won by a Georgia Southern College junior named Jodie Mudd.  In 1985, Miller Barber won the US Senior Open on the course by being the only player in the field to break par.  The cut for the tournament was a robust, fourteen-over, 158.  For many years, Edgewood has thrown a party called the Celebrity Golf Championship, where any athlete or entertainer with a familiar name and a ten handicap or lower can compete for the $500,000 purse.  Favorites appearing in this 54-hole stroke play event have included John Elway, George Brett, Michael Jordan, Mario Lemiux, Bryant Gumbel, Dan Quayle, and many others. 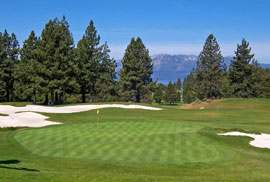 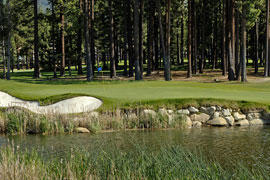 So how nice is this course that’s on everyone’s top 100 list and exudes the exclusivity and pool-table maintenance and throw-up fast greens you’d expect at the toniest private club?  For starters, it’s post-card beauty looks almost touched up.  It’s got pine-scented forests, clear streams, views of the third-deepest so-damn-blue lake in America, with the snowy spines of the Sierras beyond.  At over 6200 feet of elevation, you might hit an eight-iron 190 yards, and what could be more beautiful than that?  And unlike the Donner party (whose motto was “We don’t have any food, but we have each other”), you can enjoy a great meal in the wood and glass clubhouse overlooking a golf course that combines the awesomely powerful visual poetry of Shaquille O’ Neil in action with the refined manners and snappy good humor of Sir John Gielgud.

The longest of four sets of tees plays to 7445 yards with a slope/rating of 139/75.7.  Fourteen holes have water, and as the course routes through meadows and forests and over and around lakes, trees occasionally stand sentry, both in the fairways and in front of greens.  But nothing at Edgewood seems tricked up or artificial, merely reverent.

The first couple of holes provide a clean, classic introduction—par fours with lakewater borders and smatterings of trees.  Number one sports three bunkers, number two has none.  The third is Edgewood’s first great hole, a 599-yard epic dogleg right with trouble-making fairway bunkers loitering at the landing areas like greasers outside a corner store.  The second landing is further compromised by water on the opposite side of the sand.  From there, the hole snuggles into a chute and climbs to an elevated green hosting a congregation of trees and two front framing bunkers.

Number four conjures both Spyglass and Shadow Creek with its pine clusters and rocky stream frolicking in the open.  Another par five, of 532 yards, this hole features a bailout area to the right of the stream on the right, although the more traditional lay-up is between the creek and the bunkers left of it.  But a perfect play here still leaves a nervy angle into the small, firm green.  Trees first pose an unignorable vertical hazard on the 220-yard par three fifth, where a seemingly innocent pine guards the front left of the green, almost leaning in the doorway between bunkers and smoking a cigarette, thus menacingly discouraging a fade.  Six will shiver your timbers; the approach on this mid-length par four is more daunting than a cop approaching a doughnut shop.  If you’re short, pull out your swim fins.  If you’re long and the pin is up front, you’ll have a slippery downhill shot on a slick green, a choice not unlike that between death and bunga bunga. 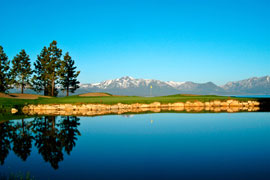 Consider ordering the hefty breakfast burrito at the turn to provide strength for the back nine, which opens with water and trees.  On number eleven, a tee shot struck too far left will leave a defending pine between you and the severely front-dropping green.  The middle holes on the back side will prove crucial to scoring before Edgewood eases up a little; the finish here is more dramatic than difficult.  When you rip your drive past the fairway tree on 564-yard sixteen, you’ll encounter your first direct view of the lake, which has lurked on the edge of consciousness for the past three hours.  You knew it was there all along.  You anticipated it.  You felt the clean pull of its clear, blue waters.  And finally, the course delivers it to you at just the right time.  Lay-up 125 yards in front of a green horseshoed by bunkers and backdropped by the Lake.  Number seventeen presents a perky par three that runs parallel to the water over a beach.  Wind direction could prove to be the protagonist here. Edgewood Tahoe finishes with what could be the easiest birdie hole on the course—unless you’re basketball great Bill Laimbeer, who launched three balls into a water hazard (since dubbed ‘Lake Laimbeer”) from seventy-five yards when leading the Celebrity Tournament one year.  Daring players might reach the green of this par five in two by massaging a fairway wood or long iron over a neck of water craning in from the left.

Edgewood is one of those rare courses where you’ll remember virtually every hole after your round.  And if you came to Nevada to gamble, you can take some pretty good chances here.  Even if you hit a hard eight when your point was four, the payoffs are still big.

All photos by Rod Hanna.