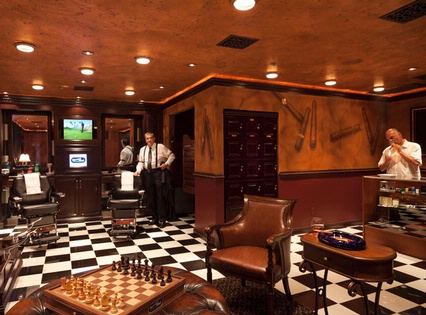 I can think of no better or more masculine way of closing out an afternoon following golf than a visit to La Quinta Resort and Club’s Havana Club— a brilliant concept that combines the simple pleasures of a physical service well delivered with the trash-talking cameraderie of a poker game.  After a morning round at La Quinta’s Mountain Course yesterday, the Golf Road Warriors headed for the luxe privacy of La Quinta.  But rather than going poolside or to the spa we stormed The Havana Club, one of the best new concepts in men’s leisure that I have ever seen.

Once we spotted the barber pole in a shady back lot and went inside, we entered a world of rare, well,  manliness: leather club chairs, big-screen TV’s highlighting the day’s sporting events; bar service; a walk-in humidor; old-school barber’s chairs; and a soundtrack that reached backwards to the 1920s and leapt forward to more modern tunes, jazzy, a little brash, yet relaxing enough to make you forget that you were about to have a stranger hold a straight-edge razor pretty near to your throat.

Once drinks were ordered we leaned back in the barber’s chairs and let it all happen.  Having never been shaved by someone else before I felt an almost sensual pleasure as my barber applied the hot lather and hot towels in an effort to soften me up, and then heard the distinctive, soothing scrape of the razor taking out my beard like Sherman marching through the South.  But marching pleasantly.

The shave took half an hour, interrupted by applications of various lubricants and softeners, some neck and shoulder massaging, and inquiries as to whether I had additional drink orders to pass along.

When it was over, my beard had been scared so deep back into my skin that I figured I could go two weeks before shaving again.  Feeling the cool air against our faces, we ducked into the warmth of the walk-in humidor for a few moments to choose big honkin’ stogies to fire up on couches just outside in the shade as we watched The Golf Channel and had another round of drinks.  And so we smoked.  And drank.  And discussed manly issues as conference attendees ambled by with their name tags swinging. 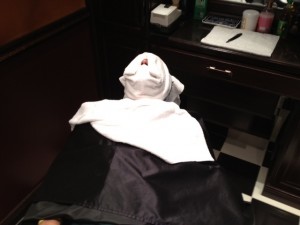 The Invisible Man Awaits the Blade (actually, it's Peter Kessler).

The Davidoff Winston Churchill #10 was a fine choiuse– a 5 1/4 x 52 robusto with a somewhat delicate Ecuadorian wrapper and spicy, sophisticated Nicaraguan and Peruvian filler.  It was light and creamy and almost sweet with a hint of brown cinammon.

My compadre, Peter Kessler, chose a Zeno Honduran about the size of a small submarine and held court to fans who recognized him despite the smooth, youthful look he exuded following his close shave.  If I can just grow my beard fast enough, we’ll probably go back tomorrow.