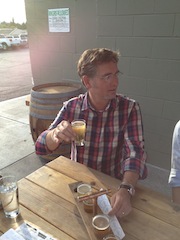 During our recent visit to Central Oregon the Golf Road Warriors– led by national beer expert and perfectly mediocre golfer Tom Bedell– performed our due diligence by visiting as many of the area’s famous craft breweries as any dedicated soldiers of suds could manage.

We started at one of Bend’s newest– the Crux Fermentation Project– located in an industrial area practically under the local highway ,which made finding it nearly as much fun as arriving there.  Even more fun was to have owner Paul Evers waiting to introduce us to the beer and the locale and give us a tour of a facility packed with happy hop heads.

Ensconsed in a former AAMCO transmission shop, Crux has adopted the color and shape of that company’s logo for their own as a cool insidery joke.  Inside the brewpub itself, everything from the reclaimed wood used for the bar and furnishings (a tribute to Bend’s former iteration as a mill town) to the wallpaper in the bathrooms (from a 1911 edition of a National Brewers Association publication) to the tap tower made from an old fire sprinkler pipe, has been given deep thought. 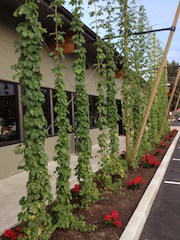 So too, the beer– of which we tried about ten varieties ranging from an unfiltered German pilsner to the DoubleCross, a strong dark Belgian ale  packing a powerful 12 ABV and a flavor as rich as European royalty.  A standout favorite, especially for our Scottish videographer David Whyte, was the Peated Scotch Ale with low hop bitterness, slight caramel flavor and a high character of peat.  We also enjoyed a guided tour through the chilly hop cooler, where we smelled the graprefruitiness of the hops– and watched, as Evers predicted: “Wait three minutes from when we open the hop cooler and people at the other end of the buidling begin to smile.” He waltzed us through the crowded room past the Italian conditioning tanks acquired from a Japanese brewery, and to the bottler which is making Crux’s Saison available outside of the brewery itself. 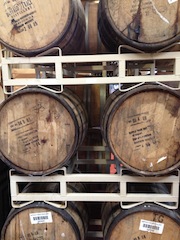 At the opposite end of the brewing spectrum, in terms of age, we also visited the renowned old grandad of Bend craft brewing, the recently-expanded Deschutes Brewery’s Bend Public House, where everything from the bread to the sausage is made on premises.  Renowned for their “try anything” attitude that has resulted in iconic beers such as Mirror Pond Ale and Black Butte Porter, Deschutes has also crafted small-batch delights such as The Abyss, Hop Trip, and The Dissident.

We experimented ourselves with a sampler that included the light and lovely River Ale, the warm and wintry, sweet and strong  Jubelale 1988, a smoked porter that might have accompanied a cigar with particular perfection, and a bottle of the 25-year-anniversary Black Butte Porter– coincidentally named for the geographic feature that also named the golf course we played earlier in the day.  We also dined on elk burgers and an Oregon berry cobbler at a big table upstairs above the main fracas of the bar.

Sadly, despite a post prandial visit to Ten Barrel brewery and a stint at the outdoor fire pit, we’ll have to save Bend’s other great beery destinations for another adventure.