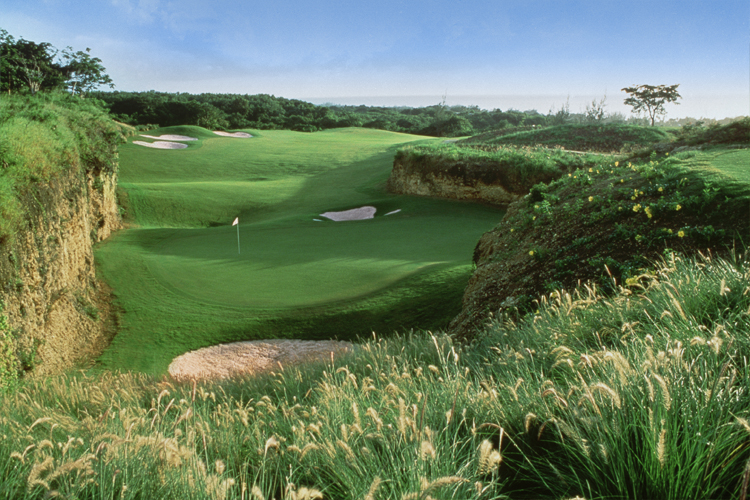 Even if no man is an island that’s no reason not to visit an island for a great warm-weather golf getaway.  The 2,500 water-bound oases known as the Caribbean chain hop in a double dogleg routing from Florida to South America, enclosing the most colorful of seas.  The Caribbean’s well-protected landing areas encompass such off-course hazards as fruity drinks, colorful reefs, great music, hot days softened by cool trade winds, and way more.  As for golf courses, consider the following . . .

Three miles from Antigua’s capital of St. John’s, Cedar Valley Golf Club offers a user-friendly journey of 6,157 yards (par 70) routing through mature tropical trees, grassed bunkers, and swales, and purveying golfalicious elevated vistas of the course itself and the Caribbean beyond.  Cedar Valley has been the site of the Eastern Caribbean Golf Championships and the British Pro Am.  Cedarvalleygolf.ag.

On the rugged north shore of St. Thomas, in the U.S. Virgin Islands, George and Tom Fazio collaborated on Mahogany Run, a golf course with a Napoleonic complex: it’s short and very tough.  The layout was blasted into a mere 110 acres of island terrain and plays along wafer-thin fairways.  Holes 13-15 are known as the Devil’s Triangle, possibly because the Bermuda Triangle was already taken.  Mahoganyrungolf.com.

Where Scores are Waxing

Shelter from the Sturm und Drang

As any golf ball knows, the words “safe haven” seem like parody when applied to the Royal and Ancient game.  On Grand Cayman, The Links at Safe Haven provide a wide-open, natural playground for balls and players alike.  Fairways are framed by long, heather-like grasses and trees including mahogany, thatch, and coconut palms.  The links-style Roy Case design along North Sound features holes that are positioned straight downwind or straight into it.

At Royal Westmoreland, on Barbados, Robert Trent Jones II replaced the old staple of sugar cane with a sweet crop of golf holes on a site that includes five playing through a former rock quarry (on the Quarry nine).  The Ridge nine is even more dramatic, routing along steep edges fronting jungle-filled ravines. The invisible hazard posed by trade winds adds to the challenge.  Royalwestmoreland.com.

With a name that might well refer to which irons you’ll need to hit here, Jamaica’s Tryall Club golf course serves up a delightful island cocktail of fun and challenge.  Tucked between jungle and ocean—and also encompassing a river—it may be the only place where you’ll ever tee off through the stone pillars of a historic aqueduct.  The Ralph Plummer design is also known for its entertaining caddies.  Tryallclub.com.

You might require a little hair of the dog after playing Pete Dye’s Teeth of the Dog Golf Course, in the Dominican Republic.  Ranked #1 in the Caribbean and 34th in the world by Golf Magazine, this hot dog boasts seven holes directly on the ocean (yes, some are doglegs).  Trees, elevated greens, waste areas, bunkers, and more put the bite in this awesome track at the Casa de Campo Resort.  Casadecampo.com.do.

On Puerto Rico, Arthur Hills and Associates created an island golf course lined with palms and lush plantings and significant elevation changes at the El Conquistador Resort.  Iguana and mongoose are among those who love this layout with 15 holes on the ocean and an 18th that—in a perfect world— plays over fountains and waterfalls. Lateral movements and broad openings characterize this venue with views of the El Yunque rain forest.  elconresort.com.