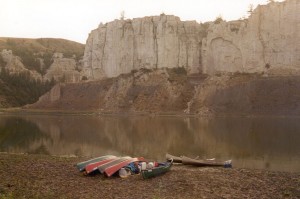 On a cool, overcast morning, I stood on the muddy banks of the Marias River with Mark Albers, then Montana Director for the conservation group American Rivers.  Albers was my guide not only to the territory, but also to the environmental challenges facing this remote wilderness.

Just downstream from us, where the Marias joined with the Missouri River, Lewis and Clark made one of the toughest decisions of their western journey.  As Lewis wrote in his journal in June, 1805, “Which of these rivers was the Missouri? To mistake the stream at this period of the season and then be obliged to return and take the other stream would not only lose us the whole of this season but might defeat the expedition altogether.”

Nearly 200 years after Lewis and Clark, Albers and I were embarking upon our own exploration of this rugged and largely untouched topography.  But our expedition faced very different decisions.  Looking downriver as thunderclouds gathered above cottonwoods clustered along the banks I was deciding whether to bail out and hole up in a cozy hotel in nearby Fort Benton.  And after one of my first paddle strokes doused Albers with cold river, he had to decide whether it made sense to continue traveling in my company.

Ultimately, we set out in a purple 16-foot canoe on a three-day float through 68 miles of the Upper Missouri Breaks National Monument, which President Clinton created in 2001 to protect the historic, scenic, and environmental treasures of this area that looks much as it did when the Corps of Discovery passed through.  A 149-mile stretch of the river is included in the monument’s 377,000 acres.  We meant to hide out in it much as Butch Cassidy once did, avoiding all contacts and letting the river work its calming magic.

Although not an adventurous whitewater trip, this section or river carves through a mostly-inaccessible wilderness and offers glimpses of millions of years of geology as well as several centuries of history– including Native American sites, Lewis and Clark Campsites, and remnants from periods of fur trading, the steamboat era, Indian wars, and waves of homesteaders and ranchers.  It provides the kind of solitude that has become rare even in the wide west.  And though grizzlies, wolves and bison have disappeared, the water, land, and sky still teem with hundreds of species.  Peter Grubb, owner of ROW outfitters which runs commercial trips along the Missouri, calls this stretch “not so much a physical adrenaline trip as an intellectual one.” During our journey, Albers and I experienced the river much as Lewis and Clark had– just with far more beer.

Of course, the river’s not exactly like when Lewis and Clark visited, which is why Mark Albers is showing me the topography.  He’s out to protect the natural ecosystem, particularly the cottonwoods, an indicator of river health.  He says, “We need to alter current grazing practices and restore more natural flows to preserve this last remnant of river that Lewis and Clark would recognize.”

Albers has been successful in effecting a change in BLM policy that eliminated hot weather grazing along the entire 149 miles of river in the National Monument.  He also spearheaded two large projects in which private landowners agreed to graze their stock away from the river corridor.  Ongoing challenges include working with the Bureau of Reclamation to restore periodic high flows (through ample dam release) to ensure the health of cottonwoods and other native species.

That first day, Albers and I paddled 35 miles around grassy islands through a wide, deserty landscape of flat scrublands and black shale hills capped by yellow sandstone. For awhile, a handsome coyote accompanied us downstream along the banks.  Occasional sprinkles freshened the air with the smells of sage and copper.  It made for a long but meditative day– the kind where your mind drifts, where you remember glossy moments from childhood, and then you eat a humongous steak cooked over an open fire.

At around 30 miles, Pilot Rock– a towering black igneous intrusion– marked our entry into the White Cliffs, which prompted Lewis to describe “eligant ranges of lofty freestone buildings having their parapets well stocked with statuary.”  To me the cliffs– one of the most striking and most photographed sections of river–  looked like gleaming Moroccan palaces with spires and facades of clean white stone carved into the ends of rolling bluffs and decorated with stands of Douglas fir, pine, and juniper.  In the stormy light they looked absolutely epic.

Late that first afternoon, when we glided up to the bank at the primitive Eagle Creek Campground, we were joyful and hungry.  After riding out a sudden windstorm huddled against the leeward concrete walls of an outhouse (the only structure here), I called for an extra dram for the men.  Albers promised to administer fewer lashings.  Tired as we were, it was worth considering that Lewis and Clark had traveled these waters upstream, by poling, dragging their boats with ropes, and occasionally sailing or rowing if wind and current were agreeable.

For the next two days we interrupted the hypnotic pleasure of flatwater paddling with the terrestrial satisfaction of hiking up into the cliffs and breaks that rolled back from the river.  Behind our first campsite we climbed through an unexpected slot canyon into a labyrinth of white sandstone formations.  On the flatlands above, we discovered tipi rings left by Blackfeet Indians a century ago.

The boat ramp at Judith Landing came as a shock; having only seen a couple of other canoeists in three days of travel, we’d nearly forgotten that the west had, in fact, been settled.  At least the Corps of Discovery didn’t have to ride in Albers’s fishtailing pickup over 40 miles of rain-slick dirt roads on the way home. 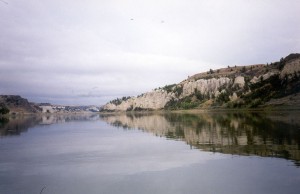