I’m a little embarrassed to admit that despite more than half a dozen visits to Scottsdale in the past twenty years, until this week I’d never really seen, well, Scottsdale.  With all the great golf courses and resorts in the widespread city, who even knew there was a downtown?  But this afternoon the Golf Road Warriors finally realized not only that there’s a quaint old city unconnected to any resort, but also that it’s charming, intimate, well-planned, and full of great places to eat, shop, or make a few Scrabble words while sitting on a bench beneath a banyan tree. 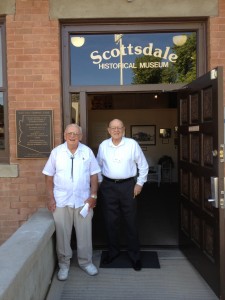 Just before eleven we arrived at the Old Red School House, which also houses the Scottsdale Historical Museum– a good start for getting acclimated to where you are, both geographically and historically.  The warmth of the welcome and the passion of the hosts working in the museum nearly caught us off guard.  We strolled the exhibits looking at old photos, maps, artifacts, and recreations of historical settings in the valley while we waited for our guide from Arizona Food Tours to meet us in the square just outside.

And then we gave ourselves over to the energetic and entirely personable Zack for the next three hours as we fed ourselves and strolled the old town and learned a little more history en route.

Our first stop was The Rusty Spur on East Main, where we were welcomed with a platter of South-of-the-Border burgers piled with roasted hatch chiles, cheese, and bacon while a cowboy musician took requests, and for some reason a man dressed in a chicken suit drank at the bar.  The atmosphere was old-west funky and I could tell it would be worth our while to try to carve out some time to come back in the evening to hear the Psycho Billy Rodeo Band.  The bar is also famous for it’s decor of signed dollar bills that patrons tack to the walls, and which are rounded up each Christmas and donated– with an equal match from the Rusty Spur– to charity. 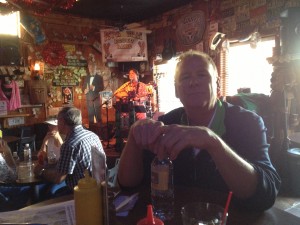 We left the Spur before videographer Jamie McWilliams had a chance to do an old Hank Williams number on the guitar– we had more food to consume, for God’ssakes.  From the old saloon we headed for AZ88, which bills itself as a “modern day saloon,” according to Zach.  The jolly proprietor described AZ88 as an airy place with “a long bar, high ceilings, and lots of whisky.”  Though we’d be the last guys to find fault with drinking whisky before noon, we passed on the libations, which left more room for AZ88’s Hellfire chips– house made potato chips loaded with bleu cheese and hot sauce.  While we wistfully perused the creative cocktail list, plates of homemade shrimp ceviche appeared as if by magic.  The dish was created when the owners of the restaurant noticed that a lot of their shrimp seemed to be disappearing– they eventually found it out behind the restaurant, in this dish, which had been conjured by some of the Mexican workers who’d artfully mixed the shrimp with radish, cilantro, avocado, and tomatoes.  AZ88 now serves the ceviche heaped on homemade pita chips.  We finished the triumvirate of great appies with water chestnuts wrapped in bacon and then lightly deep fried and served alongside a honey dipping sauce. 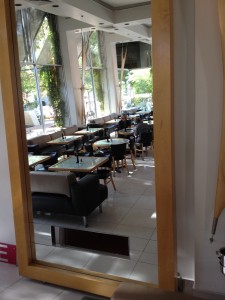 Leaving the Civic Center Plaza– and its performing arts locales, library, and jail behind– we crossed over to Frontiertown and followed its rustic wooden boardwalk to Outrageous Olive Oils and Vinegars for an extensive tasting of some of the freshest oils and oldest balsamic vinegars to share shelf space and mingle in tiny little tasting cups.  Rayna, the owner and head taster, provided us with context about the 600 varietals of olives and the 6,000-year history of the olive from Asia Minor to the Mediterranean.  She explained the health benefits and offered tips for buying the best olive oils, which should come in dark bottles and provide the crush date as a mark of freshness.  At this particular time of year, Australia and Chile had recently harvested olives and so were providing the best extra virgin oils.  Rayna’s presentation was like an introductory survey class at Olive University. We also tasted an 18-year-old balsamic that was every bit as rich as a single malt scotch, and sweet enough to drink like a cocktail. 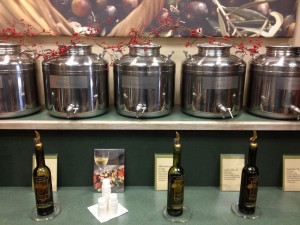 And speaking of cocktails, our next stop took us into Old Scottsdale’s Arts District, lined with galleries and home to 5th and Wine, where we sampled the red and white homemade sangrias and snacked on a trio of bruschettas made with roasted red peppers and goat cheese; a caprese version with cheese, tomatoes and basil; and a house made hummus.  The white sangria washed it all down beautifully with the light fruitiness of watermelon, apple, orange, and rum.  The indoor-outdoor seating, pull-up-a-stool bar, and whimsical artwork made this a place worth coming back to– particularly any day between 11:00 and 6:00, when all wines are five dollars a glass and twenty dollars a bottle. 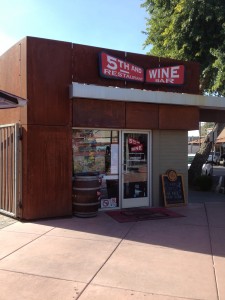 Is there a cuter wine bar-- with better bruschetta-- anywhere?

Our final food stops took us into Scottsdale’s newest section, the shopping district that was first built to support the Superbowl coming to town a few years ago.  Cowboy Ciao— famous for its clever name suggestive of equally creative food pairings– served us a chopped salad of arugula, trail mix with manchego cheese, Israeli cous cous, corn, pepitas (pumpkin seeds), and a few other fresh, delicious ingredients all perkily attired in a pesto buttermilk dressing.

Cowboy Ciao: you just want to drink in a place that has cool art like this!

Could their possibly be a better idea than mixing ice-cream with liquor?  And could you imagine anything else better to cap off a warm afternoon of eating and drinking before transitioning to a later-afternoon nine-hole round of golf at the Phonician?  The rather stuffed Golf Road Warriors, in danger of missing their tee time, were disappointed (Dennis Silvers in particular, as ice cream and liquor happen to be two of his areas of expertise) to have to skip the last stop on our tour.  But sensing potential tragedy, the ever-resourceful Zach made a surgical strike and went to Lee’s Cream Liqueur for us while we munched our chopped salads at Cowboy Ciao, and lassoed up bowls of  Chocolate Swirl  laced with Jack Daniels for us to take with as we headed off for the rest of our great Scottsdale adventure. 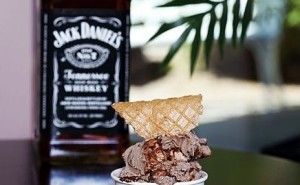 Chocolate Swirl and Jack Daniels. You have a better idea?

Note: The Golf Road Warriors have undertaken tours of every imaginable kind– from cave tours to culinary tours– on six continents.  A Taste of Old Scottsdale was among our favorites thanks to Zach’s good natured, easy-going personality and the genuine welcome we received at all the establishments.  Not to mention: ice cream with liquor in it.