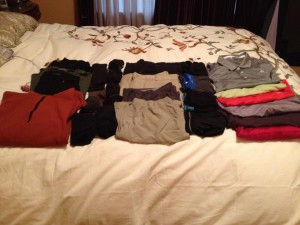 As a professional travel writer I’m supposed to be cat-like in my stealthiness, moving through the world with nothing bigger than a Ziplock bag to hold a week’s worth of clothing, toiletries, electronics, reading material, and enough Ibuprofen to numb a pack horse.  But the fact is– as I’ve learned from my many trips to Bandon Dunes for warrior-like golf outings– that the guy who’s most prepared for a trip, usually performs best on the golf course.  So at Bandon, carrying three separate rain suits, as well as a variety of under-layers, golf shirts, and fleeces, has always paid off.

Packing for a week of golf in Scottsdale would appear simple until you check the weather forecast and discover that hot, sunny days await, but so do crisp winter nights.  Temps are expected to swing from mid-seventies in the afternoons to mid-forties after dark.  And since we’re already paying the airlines for the privilege of actually taking belongings with us on trips these days, we might as well push those bags to their weight limits.

So, three pairs of shorts each to be worn twice each, plus an extra pair that doubles as a bathing suit.  And the rain pants I chose for this trip have unzippable legs that turns them into another pair of shorts.  Six golf shirts– one for each day.  Three with stripes, three solid, to be mixed and matched with shorts.  A casual ox blood belt that looks great with any color or pattern.  Six pairs golf socks.  Dark hat (from Ballyliffin Golf Club), light hat (from Bandon Dunes).  Funky old-school cap from Puerto Rico’s Royal Isabella.  Seven pairs underwear, because you never know (one pair goes in carry-on bag).

Two wind shirts that double as sweaters in the evenings, and one fleece, plus two sets of Smartwool under-layers and one pair of long underwear for cold mornings and/or biking and yoga.

Two pairs shoes, one brown, one black.  And a pair of Keen’s for wearing with shorts, biking, desert wildness, etc.  Another belt for evenings.

No friggin’ tie!  We’re not going to be dining at the Royal and Ancient clubhouse.

And then all the electronic paraphernalia, from Iphone and accompanying chargers and cords; digital camera; laptop; notebook and pens; reading materials.  Crucial documents.  Stack of business cards.  That sort of stuff.

Toiletries– with enough varieties of drugs to fight anything from scurvy to anthrax, earplugs in case screaming kids (or adults) live next door.

Squeeze it all into two of Travelpro’s newest and best suitcases– one for checking, one for carrying on, and I’m good to go.

I’m comforted to know that most hotels will have a toothbrush at the front desk.