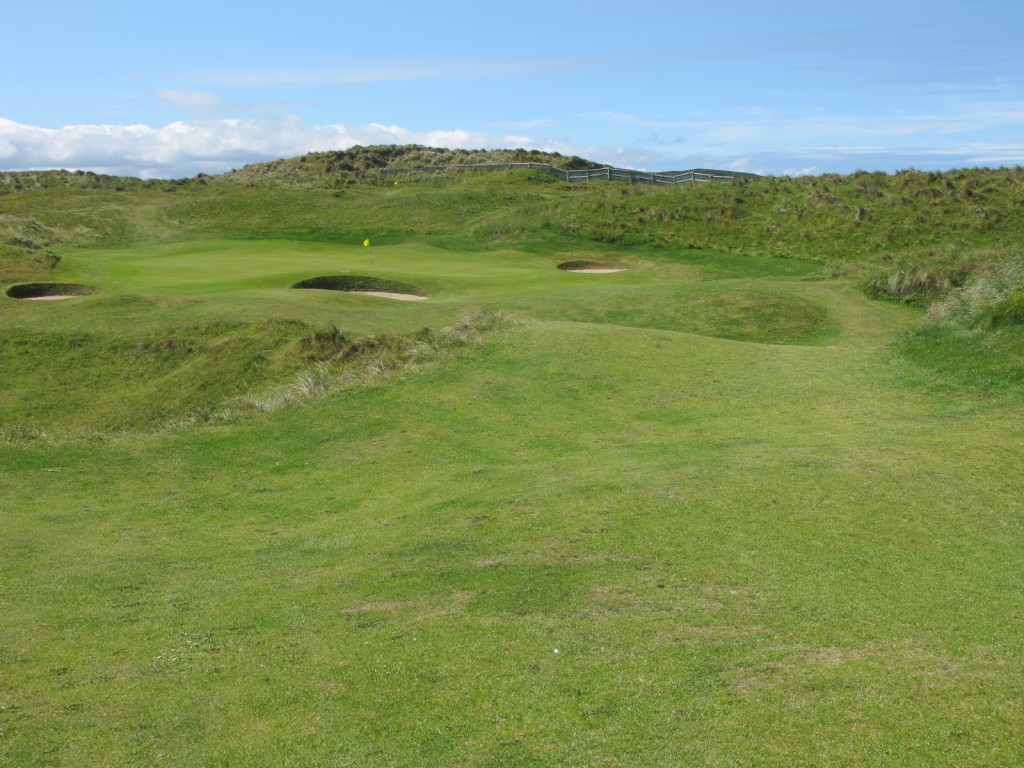 Seeing how the golf holes at Donegal sit so contentedly in the low dunes beside a round bay you’ll think they’ve been tramped and played upon for centuries.  But these sublime links were actually designed with the help of Eddie Hackett in the 1970s, proving that you don’t have to be old to be great.  Donegal has the wide, open, inviting feel of the great Panmure in Scotland, with surrounding pines and a feel somewhere between true links and heathland.  Recent Open Championship winner Darren Clarke proclaimed Donegal as one of his favorite in the world.

The course opens with a stout 520-yard par five that leads you off from civilization and asks for a couple of well-struck shots off the turf to a green protected by a figure-eight bunker in front.  Two crossings of a dry burn foreshadow a major strategic element that will reappear throughout the day.  The course presents various moods and recalls some of the other great links courses of the world, as at number six, where the 500-yarder with the ocean paralleling the fairway just beyond high dunes evokes Turnberry.

The front nine loops in a returning outer circle around the back nine, which plays in a tighter loop.  Expect to hit some great shots and be punished for them if the fates have deemed you undeserving of a kick that– had it been two inches to the left– might have avoided danger, but also expect cleverly crafted green complexes with bunkers that often ask for a high, soft delivery– in our cases often hit out of tall fescues.  The grasses release the ball more generously than expected and so shots you worried about delivering to the green may well sail over them leaving similar shots– though shorter– out of similar grasses.

The burns which wind parallel and across many holes set the limits of sensible landing areas, which is great if you’re paying attention and maddening if you just want to step up and crush a shot, as the Golf Road Warriors seem apt to do.  Upon delivering my second shot on number eleven into a burn I turned in frustration to Hal Phillips, who shrugged unsympathetically and told me I should know enough to expect such vagaries from links golf.  Which was good advice quickly ignored when he soon cursed his own fates and the unfairness of a bounce that would render his rather open-faced and pushed tee shot unfindable.

The other interesting moment in today’s round was when I observed Peter Kessler fall to his knees following a sand wedge into the green that found the front right bunker.  I watched as Peter writhed for a few moments and then crawled back to the cart on his hands and knees.  This was in great contrast to his patently annoying “victory dance” delivered when he makes an impossible up and down out of a bunker or grass taller than he is, or some such inexcusable miracle.  I assumed the crawling and writhing were due to the fact that my ball lay fifteen feet from the pin and Peter knew I was about to go one up in our match.  I’m still not entirely convinced that the whole hospital visit, etc., that followed wasn’t a ruse to escape from a match that Peter clearly recognized from my new-found vigor and sudden and unexpected purity of swing was unwinnable for him.

It turns out after much driving about the country to doctors and hospitals that Peter tore a muscle around his hip and will be out of golf action for some time, though like any true golf warrior he’ll be staying with us for moral support as well as– we hope– assuming the burden of much more of the work involved in this trip while we traipse around the golf course smoking his cigars.

Must grab a quick curry before the drive to Eniscrone.  More soon.