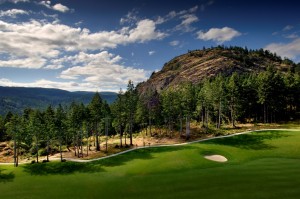 Bear Mountain Roars in Victoria, BC

Golf is full of animals—and not just the ones you notice ducking for cover in the shrubbery when they see you addressing your ball.  If you ever watch golf on t.v. you can catch the Golden Bear (Jack Nicklaus) the Walrus (Craig Stadler), the White Shark (Greg Norman), and, of course, Tiger.    Or how about Tim Herron, Ian Baker-Finch, Jonathan Byrd, Ben Crane, and, of course, Steve Elkington?  Following are a few courses worthy of the variety of species attracted to the sport.

Whether you think a rabbit’s foot is more auspicious than a dogleg, the Choctaw Tribe’s Dancing Rabbit Golf Club, 70 miles from Jackson, Mississippi offers opportunities to try your luck on two highly-ranked Tom Fazio/Jerry Pate courses: Oaks and Azaleas.  Brian McCallen wrote in GOLF Magazine, “Fazio and Pate have joined forces to develop the state’s greatest asset since Elvis came of age in nearby Tupelo.”  www.dancingrabbitgolf.com.

A half-day’s drive south of Berlin, lies the rarely seen German Jaguar—actually the Jaguar Course at the enormous Hartl Golf Resort in Bad Griesbach.  Three of the courses here were designed by Bernhard Langer—and one is named for an even more ferocious animal: soccer great Franz Beckenbauer.  Don’t miss the renowned chewy pretzels in the clubhouse. www.hartle.de.

Just outside Puerto Vallarta, El Tigre Golf Club prowls the Paradise Village Resort.  Designed by Von Hagge, Smelek, and Baril, the 7,239-yard course features water on twelve holes and three “beach” bunkers that run right down to the H2O.  Tropical styling, all-Bermuda grass, and an island green par three make this the perfect place for a Mexican standoff with your opponent (or spouse).  www.eltigregolf.com.

Business in the Front (nine), Party in the back (nine)

Superseding the haircut of the same name by decades, St. Maarten’s Mullet Bay Golf Club was designed by Joe Lee in 1971.  The short (6,300 yards) layout has been in some disrepair since Hurricane Luis in 1995, but still offers some of the best scenery on the island.  The front nine rims Simpson Bay Lagoon and the entire course features small greens that are even harder to hit due to frequent stiff breezes. www.stmaartengolf.com.

With tees called Black, Golden, Grizzly, Spirit, and Cinnamon, Bear Mountain’s golf courses could only have been designed by—no, not Gentle Ben: Jack Nicklaus (and co-designed with son Steve).  Located outside Vancouver, BC, the Mountain Course offers mountain, city, and ocean views from a muscular track set in lush forest.   www.bearmountaingolf.com.

Approximately 250 miles west of Omaha, in Gothenberg Nebraska, Wild Horse Golf Club rears and bucks with a design that Golfweek called the best golf course in the US for under $50.  The 6,805 yards stretch across native grass prairies without trees or water but punctuated by natural sand blowouts that serve as bunkers.  The high-horsepower greens (meaning: fast!) may put a hitch in your giddyup.  www.playwildhorse.com.

Jose Ganced’s Costa Dorada Golf Course, south of Barcelona, invites you to wander across open fairways, many of which are laid out on the side of a hill.  Avoid the occasional olive trees for an easy day.  Peugeot Golf Guide has said, “In the family of golf courses for everyone, Costa Dorada is right up there with the best.” In keeping with the fish theme here, go to school on your partner’s putts.  www.golfcostadoradatarragona.com.

While the wolf may well be at the door, he stepped away from it long enough to design the putting surfaces at Wolf Creek Golf Resort, south of Salt Lake City.  Just when you figure out that all the greens slope severely from back to front, one doesn’t—the perfect “nya nya” from architect Mark Ballif, who designed this as the Patio Springs Country Club back in 1965. www.wolfcreekresort.com.