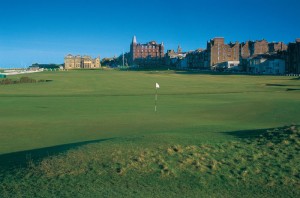 When visiting the Louvre, in Paris, for the first time, it was all I could do to keep from sprinting between great vaulted halls housing masterpieces that were as stirring as they were renowned: the Mona Lisa here, a gallery of dark, moody Rembrandt’s there, works from the Italian Renaissance around another corner.

I always feel the same giddy anticipation when standing in the salt breeze beside the starters shack of the Old Course in St. Andrews, Scotland.  The ancient stone city is the Louvre of golf courses, themselves a sort of interactive art—no less beautiful or natural than, say, the greatest plein aire landscape paintings, but with the added benefit that you can step right into them for three or four hours with a couple of your friends.  You just have to walk quickly, because the Scots golf fast.

First-time golf pilgrims to St. Andrews need look no farther than the Links Trust’s six public courses that play within a rolling wedge-shaped linksland bordered by the city skyline and a rocky beach beside the North Sea (scenes from the movie Chariots of Fire were filmed here).  The Links Trust was formed in 1974 by an act of Parliament to manage and preserve the St. Andrews Links as a public park.  But a public park that’s home to a handful of the best golf courses on the planet. 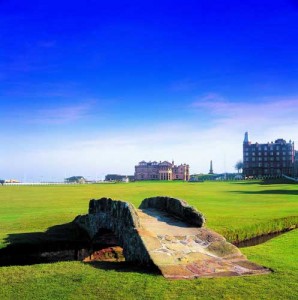 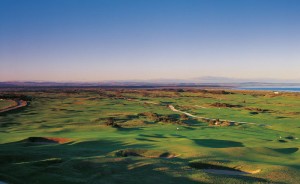 According to golf historians, the Royal and Ancient Game has been played on the current location of the Old Course since 1400.  Today that hallowed ground is considered the home of golf.  More than 20 Open Championships (British Opens) have been contested on these unpredictable yet beloved holes.  Seven double greens, dozens of hidden pot bunkers (112 bunkers overall, including the infamous Hell and Road Hole bunkers that are as deep as mine shafts), quirky bounces, and the Swilken Burn (creek)— which requires several crossings— are only a few of the personality traits that lend the Old Course it’s distinctive and sometimes combative character.  Wind ripping in from the sea serves as an invisible hazard—one time, searching for an errant, wind-blown drive, I found the ball but lost my hat.

The Old Course was not designed by a specific architect, but has evolved over six centuries with minimal interference.  It has aged gracefully; its green contoured carpet of fairways is offset by tawny fescue grasses and gorse that blooms yellow in spring, and there’s no more beautiful stretch of turf for a golfer or anyone else who appreciates the sublime sculpting of natural earthworks.  And there is no more exciting moment in golf than to cross the stone Roman-era Swilken Bridge and then play in on the wide eighteenth fairway toward town with the lights coming up at dusk and the pubs of St. Andrews filling with locals.  Arnold Palmer has called the Old Course “Golf in its purest form . . . still played on a course seemingly untouched by time.”  I like to think of it as a place where art, nature, sport, and spirituality converge.

But the Old Course is only a small part of the St. Andrews story, and golfers not wishing to leave the embracing ambiance of the city can choose from five other courses currently managed by the Links Trust (a new course will be added in 2008), plus a few others within a short drive of town.  The best of the rest of the Links Trust courses, many believe, is the New Course, which despite its name was designed by Old Tom Morris in 1895.  Though possessing a less storied history than the Old Course, the new is a better test of golf.  Less quirky and more apt to reward good shots and punish bad, its been ranked by Golf Digest among the 100 top courses in the world.  Filling out the Links Trust rota are the Jubilee (closest to the sea), Eden (designed by Harry Colt), Strathtyrum (a fine choice for less-skilled golfers), and the 9-hole Balgove (no reservations required, just turn up and play).  All route across similar links terrain adjacent to the Old Course and are served by one of two public clubhouses. 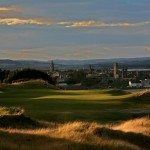 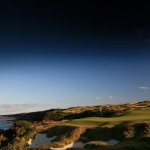 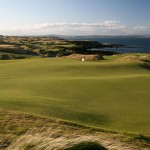 In 2008 the Links Trust will add David McLay Kidd’s new Castle Course to its collection.  Located a ten-minute drive south of town toward the impressive Fairmont St. Andrews Hotel, the rambling and somewhat artificial-looking course is only the seventh layout to be welcomed into the St. Andrews family in 600 years.  It rolls and bumps across a 220-acre site atop cliffs overlooking St. Andrews Bay, the Grampian Mountains, and the North Sea.  Six holes caper along a cliff edge.  The highlight may well prove to be the par-three seventeenth, which plays over a yawning chasm to a green perched on a rocky outcropping. 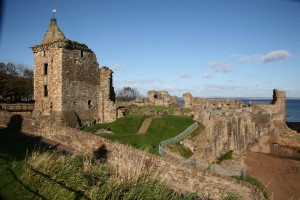 In the rare case that you get your fill of golf, the town of St. Andrews is worthy of a visit in its own right.  The University was founded in 1410 and this is still a college town— full of music stores, fish and chip shops, boutiques, restaurants, and great places to drink coffee.  At the south end of town wander through the ancient graveyard and the ruins of the neighborhood castle, which stood as backdrop to many bloody episodes during the Reformation.  Nearby, stop in at the house where Mary Queen of Scotts lived for a time.  Or climb St. Rule’s tower for great views of the city and the rolling countryside beyond.  Even for non-golfers, a visit to the British Golf Museum may help explain what all the fuss is about.  Or not.  Other attractions include an aquarium, botanical gardens, and even a witches tour.  But much of the pleasure of St. Andrews is simply strolling down its cobbled lanes.

A further part of the adventurous charm of Scotland outside of St. Andrews is driving on the left side of the road through small seaside villages, stopping for a steak and ale pie at an old stone inn, sipping a local ale overlooking a protected harbor, and finding warm, insular bed and breakfasts to overnight in.  I remember fondly my own first driving experience in the country: motoring five or six times around the first traffic circle I encountered before feeling confident I knew how to turn back out of it in the correct direction.

Once you get past these so-called “roundabouts,” you’ll find the county of Fife is silly with places to relax, stroll through, and photograph.  And, of course, many of these small towns boast world-class golf of their own.  Fife is blessed with additional courses that rival the more famous venues that most golf tourists rush to when equally fine courses await nearby, full of friendly locals who may invite you into the clubhouse for a post-round whiskey.

Heading south from St. Andrews, the Fairmont St. Andrews Hotel offers play on two fine courses with modern accents. The Torrance Course, designed by European Ryder Cup captain Sam Torrance, features a number of cliff-edge holes and views of the Eden estuary and the medieval skyline of St. Andrews.   Subtle moundings, stone walls, and sheer drops to the water keep the excitement level high.  The hotel’s Devlin Course boasts some terrific driving holes and finishes with a par three the green of which is in sipping distance of the cliff-top clubhouse.

Motoring further south you’ll encounter the incomparable Kingsbarns Golf Links, crafted by architect Kyle Philips and featuring some of the most make-you-weep beautiful humps and hummocks anywhere, flowing between revetted bunkers and perky little burns, and surging between dune ridges and hollows in a way that will move you to want to hug every hole. 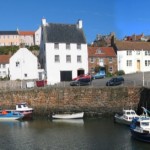 Village of Crail, photo by Linksland.com. 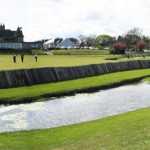 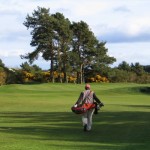 As part of a loop that heads farther south, then west, then northeast back to St. Andrews golfers can also take in several other world-class but less-visited courses.  Crail Golf Club’s Balcomie Links was designed by Old Tom Morris and opened in 1895.  The stone Lifeboat shed is as picturesque a landmark as you’ll find anywhere.  Other nearby gems include Lundin Links (with one of the great finishing holes in all of golf, crossing a burn to a green fronting a massive Victorian clubhouse); Leven; Elie—where the starter ensures that the blind first fairway is clear by looking through a periscope from an old submarine; and Scotscraig, to the north, a lovely mix of links and heathland holes playing through trees, gorse, and heather, and offering respite from windblown links layouts. 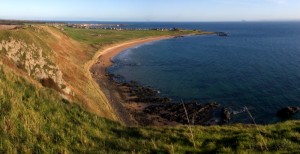 From any of these golf courses, it’s a short ride through pastoral countryside back to St. Andrews.

Balaka (+44 (0) 1334 474825, www.balaka.com), in the heart of downtown, serves up some of the hottest curries and best Indian and Bangladeshi food this side of New Delhi.  Steaming hot nan breads and a variety of local beers will help soak up the heat of a chicken vhindaloo.  Ranked among the top curry houses in the entire UK.

The Seafood Restaurant (+44 (0) 1334 479475, www.theseafoodrestaurant.com).  So close to the sea that fish may swim right into the kitchen, this sleekly elegant eatery with floor-to-ceiling windows and an open theater kitchen is built upon a cliff jutting out into breaking surf.

Fairmont St. Andrews (52 984 884 2028, www.fairmont.com/standrews.)  About seven miles south of town, the massive Fairmont is a cross between a Scottish castle and a large American-style resort.  Occupying 520 acres overlooking the Fife coastline, the five-star hotel encompasses 209 guest rooms and suites, two modern Manor Houses, a spa, five restaurants, and two fine golf courses.  Recent renovations will deepen the rugged, outdoorsy Scottish accent of guest rooms and public areas.  Esperante’s Mediterranean cuisine is among the best and most unusual dining experiences in the region, with a wine list to match.

The Dunvegan Hotel (+44 (0) 1334 473105, www.dunvegan-hotel.com.) lies exactly 112 yards from the Old Course and features the liveliest golf-centric atmosphere in town.  Several guest rooms above the pub and restaurant make for a cozy bivouac.  The three-bedroom, two-bath Auchterlonie suite just across the street is named for the last Scotsman to win the Open Championship before Paul Lawrie won it 106 years later.  The Lounge Bar and Claret Jug Restaurant have played host to every major golfer who’s ever visited St. Andrews, and the walls are a golf fanatic’s dream—covered with scorecards, photos, and other paraphernalia.  This is where everyone who ever plays the Old Course should celebrate after the round.  Don’t miss the sticky toffee pudding.

Open the curtains of certain rooms at The Old Course Hotel (+44 (0) 1334 47437, www.oldcoursehotel.co.uk) and you’ll be overlooking golfers hacking their way down one of the most famous holes in golf.  The upscale hotel’s Road Hole Bar is home to the world’s most extensive collection of Scotch whiskeys—174 distilleries are represented.  Views over the Links Trust golf courses and of the ancient stone town are unparalleled.

All photos by David J. Whyte.  To see additional photos and view videos of some of the world’s greatest golf courses, visit www.go-golf.tv.