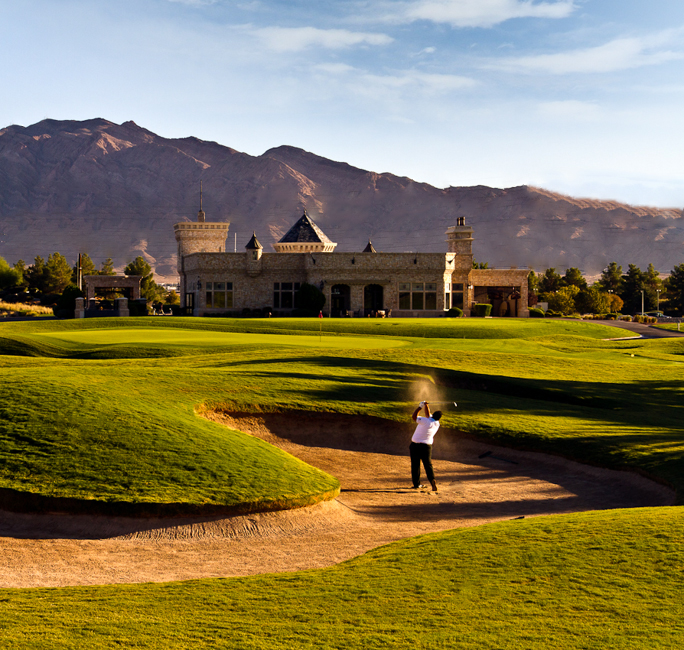 Hell Bunker and a Hell of a Good Time.

Only a super-star like golf professional and newest Golf Road Warrior Aubrey McCormick could match her hat to the British phone booth she didn’t even know she’d encounter during today’s golf round at the terrific Royal Links Golf Club in Las Vegas (see photo below).  She didn’t emerge from the phone booth with a cape on (or even a regular chicken, for that matter), but she did emerge from the shadows of her summer appearance on The Big Break Atlantis to make her debut as the newest writer at The A Position.com.  And her coming-out party is this four-day Golf Road Warriors adventure to Las Vegas.

But the real star today was Royal Links.  Las Vegas itself can be  anything visitors want it to be: smooth and classy as Sinatra, glitzy as KISS, hotter than a lap dance, solidly respectable as . . . well okay, maybe not solidly respectable.  But you want Paris?  Venice?  Pirate ship?  Pyramid?  Yeah, they got that.

And in a golf adaptation of the same adult-dreams-can-come true philosophy, Royal Links can be any one of nearly a dozen of the best golf courses on the planet.  The holes themselves are “inspired by” (since nobody can legally claim to have built a replica of) some of the greatest holes from a host of courses that have hosted the (British) Open Championship.

Executed by Dye Designs, the layout offers an entertaining and challenging day at the links, and greens fees include one of the best yardage books you’ll find anywhere– describing some of the history from each of the original holes that these were based on.  For example: about the eighth hole, inspired by a famous 153-yard par three at Royal Troon, the book reads : “Willie Park described the hole as having ‘a pitching surface skimmed down to the size of a postage stamp,’ a description that gave the hole a name which it still bears today.”

It also goes on to quote Gene Sarazen, who described a return visit to the hole when he was 71 years old thus: “For many years, the Postage Stamp hole had haunted me; I feared it, so when I walked on to the tee and faced the wind, I must admit I was somewhat nervous.  I selected my 5-iron and I was determined not to be short.  When the crowd roared and I realized the ball was in the hole, I felt there was no better way to close the books on my tournament play than to make a hole-in-one on the Postage Stamp and call it quits.”

No Golf Road Warriors made a hole in one on the Postage Stamp at Royal Links, but then we didn’t call it quits, either.  We soldiered on in downright British conditions– unseasonably cool temperatures and a brisk wind kicking up off the North Sea– er, I mean the Nevada desert.  Each of us ended up in several of the 107 pot bunkers sprinkled around the layout– many of which are invisible– and mostly to the amusement of the others in the group as we caromed balls out off the sodded walls, were forced to hit sideways and take our medicine, or when we hit heroic escapes from close up against the near-vertical fronts.  There may be no more satisfying shot in golf than hitting a perfect, open sand wedge that bounces through and launches a shot straight up and out of such a hazard.  Adding additional veracity to the true links feel of the place, the grasses here are over-seeded to lend that bare, British winter feel.  From the back tees Royal Links stretches just beyond 7,000 yards.

The golf course opens with a short par four from Royal Lytham golf club with the fairway curving off to the right between rough moundings.  Pods of pot bunkers protect the putting surface.  Subsequent holes on the front side transport you to Royal Troon, Prestwick, Royal Liverpool, St. Andrews, Royal Birkdale, Royal St. George, and Muirfield.  Not a bad collection of destinations.

The back begins with the Road Hole from St. Andrews, though without the hotel to hit over.  There was a large billboard at the corner instead, that offered a welcome to the Golf Road Warriors, a nice touch.  In return we were hospitable enough not to hit it– though someone who will remain nameless was close.  My only disappointment of the day was not to have a single one of my companions face the utter hilarity of trying to escape the infamous Road Hole bunker.  The golf journey on the return nine continues to Royal Cinque Ports, Turnberry, Carnoustie, and a few other holes from destinations already visited.  The day concludes with an opportunity to land in Hell Bunker from the 14th at St. Andrews, which I took full advantage of.

The first time I played here at Royal Links several years ago I was pre-disposed not to like it because of its derivative nature; despite this silly purist prejudice I couldn’t help myself: I had a blast.  And my return this week was no different.  There may be no other golf course better suited to the quirky, fun-driven personality of Las Vegas.  If the clubhouse, designed to resemble a Scottish castle, is kitschy, that’s the whole point.  The one thing about the day not really like the genuine British golf experience is the warmth and service offered by a terrific staff at Royal Links– both golf staff and food and beverage personnel.  And we didn’t have to win a lottery play any of the golf holes. 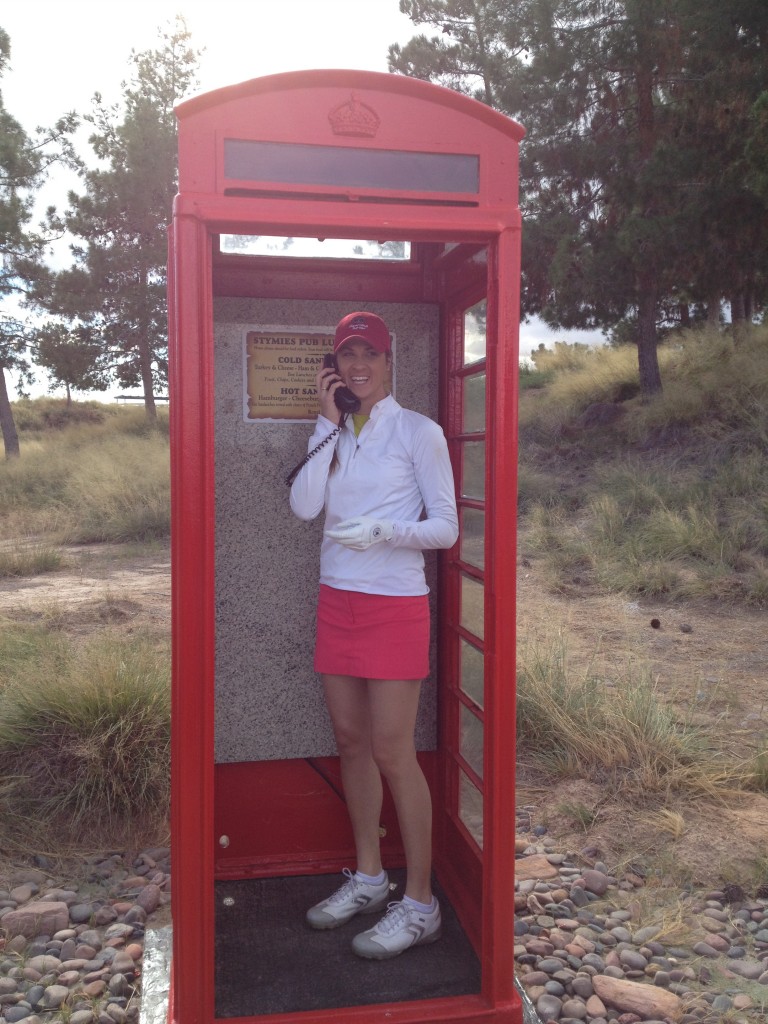 Aubrey McCormick: So Good She Can Call Her Golf Shots.