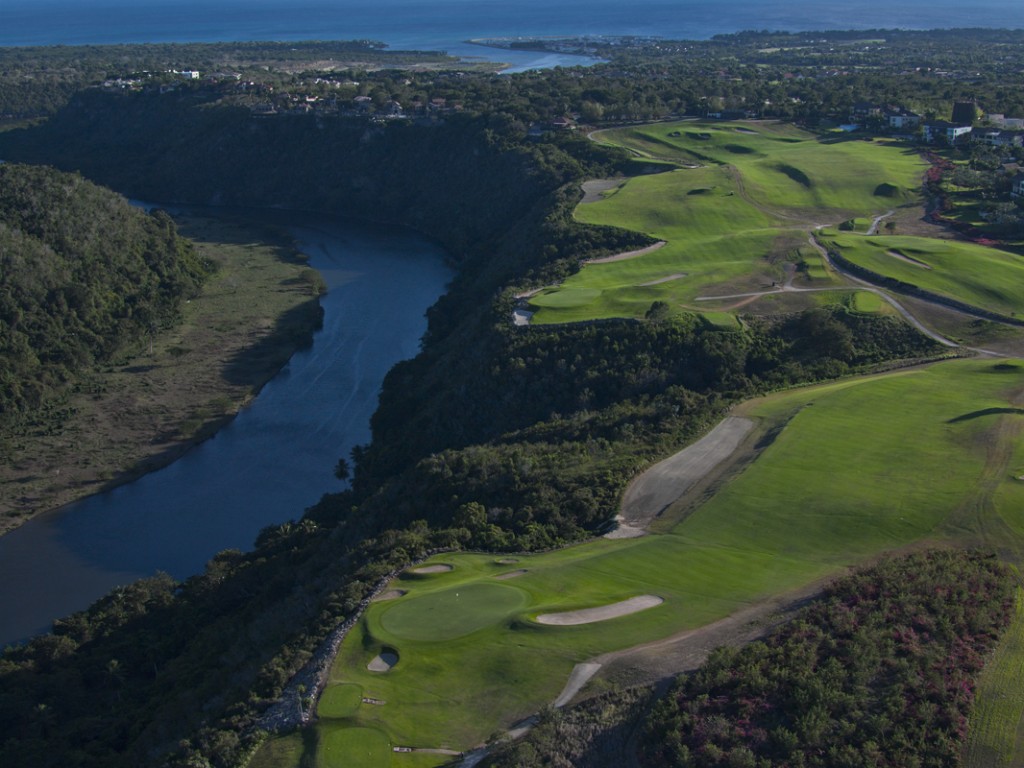 In my experience, most great artworks have a way of bringing to mind other great artworks we’ve encountered– so it is with music, writing, painting, and even golf course architecture.  Today at Casa De Campo Resort the Golf Road Warriors enjoyed a high wow-factor day on the Marina and Chavon nines of the Dye Fore Course.  Early on, comparisons were made to the Plantation Course at Kapalua, but I was also struck by the similarities of our two days of golf here with two days of golf I enjoyed on the Hawaiian island of Lanai.  Moving from the phenomenal seaside holes of Casa De Campo’s Teeth of the Dog yesterday to Dye Fore– located along dramatic bluffs high above the Chavon River– today, brought to mind playing Lanai’s Challenge at Manele along the ocean and then heading upwards to experience The Experience at Koele the following morning.  Except that the courses here at Casa De Campo are both much better than their Hawaiian counterparts, designed by Nicklaus and Norman. 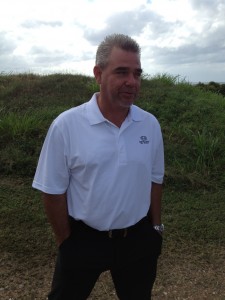 It’s difficult to imagine a purer and more enjoyable layout than Casa De Campo’s Teeth of the Dog (TOD), and yet stepping up in altitude today to the Dye Fore also involved a step up in drama.  Locals will tell you that neither track is better than the other, they’re just different.  Which is certainly true, but to me, each is better, just in different ways.  Golf professional Raul Cendoya put it to us this way: “When you come off Teeth of the Dog you are dying to play it again.  When you come off Dye Fore you’re exhausted.”  Which perfectly reflected our experiences.  While TOD felt very manageable and even shorter than the 6,500 yards we took on, Dye Fore– thanks to wind, gigundo elevation changes, perched greens, frequent ravine crossings, and super-fast putting surfaces– had us back on our heels from the start.  While the fairways are generous, the overall feel is daunting.  And dramatic.  Like a Bond movie viewed as the second part of a double feature that started with a beautifully crafted Merchant and Ivory film.

Dye Fore begins with two inland holes lined by the kind of gorgeous housing you actually WANT to see along a golf course because of its architectural interest and artisanal beauty.  But then at the par-three third hole, the course makes its first costume change: up near the green golfers are offered an initial distant view of the Mediterranean-style marina in the distance and far below, as well as the mouth of the Chavon river feeding out to sea.  The fourth hole is the toughest on the front side– 500 yards of par four from the back tees, with a target bunker downhill on the right.  Bailing out to the safe right side of the fairway may also result in an overly-long approach to the tricky green.  The eighth hole on the front offers a linksy example of fine Dye design as it tunnels between mounds on its way to a green more than 600 yards distant, and brings to mine the Scottish heritage of the game, although I promise not to call it “The Dominican Dornoch” or by any other equally foolish moniker. 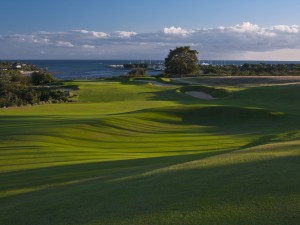 But if the Marina Nine had us thinking about other golf courses the Chavon nine brought another art genre to mind: film.  Both Anita Draycott and I remarked separately that the jungle terrain climbing bluffs up from the river reminded us of the topography in The Mission.  Then we learned that scenes from Apocalypse Now were shot nearby.  But to imagine these wild and pristine venues you have to look upriver.  Because the view downriver is of an Italian Renaissance village with stone buildings with red slate roofs clinging to cliffs high above the water: the El Chavon complex, which I will talk about in another post.

Virtually every hole on the Chavon Nine startled– particularly two par threes requiring forced carries over ravines at numbers three and six.  Other holes used the riverside slopes and jungles as hazards to be avoided, a challenge made all the more difficult by fairways that may cant in the direction of said vegetation.  The holes force a close look at the terrain to discover any potential breach in the defenses.  Shots left even a little short, or sprayed to either side will likely pursue a roller-coaster ride back down some steep greenside slope toward an awaiting swale.  The course concludes with a massive and muscular  par five of 600 yards with an upper and lower tier to the fairway, which itself drops from the tee before climbing back up to a green protected by a pod of pot bunkers.

As promised, the round exhausted us, the way any great workout exhausts– we were sorry to be finished at the same time that we were relieved.  And now, a few hours later, I’d like to have another opportunity on Dye Fore.  Except, of course, for the fact that it’s dark.

All photos by Larry Lambrecht.