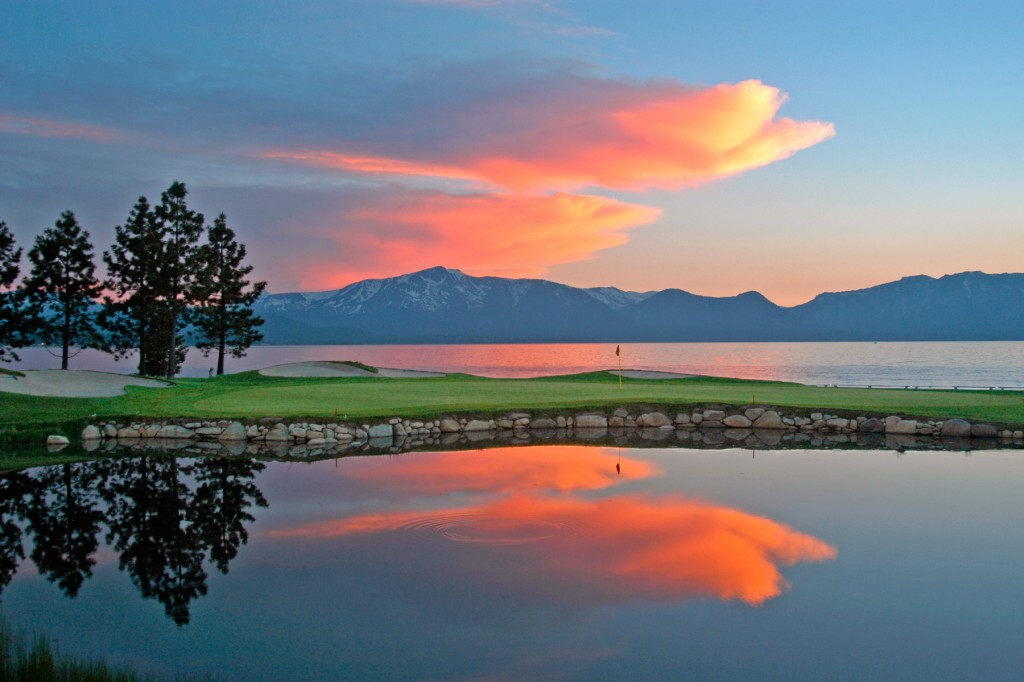 All photos by Rod Hanna.

If you think miners were busy hauling ore out of the ground in the border area between California and Nevada in the 19th century, just try harnessing the vein of great golf courses (45 within a 90-minute drive) that have sprung up a hundred years later.  Get a fast car, a lot of drinking water, and a passel of golf balls for a thrilling yee-haw road trip covering the best layouts this wild western locale around Reno, Carson City, Lake Tahoe, and Truckee has to offer. 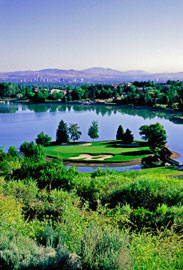 Although there are as many ways to route this trip as there are ways to make double bogey, most visitors fly into Reno, which bills itself as the biggest little city in the world.  Reno is Vegas without the crowds; instead of faux European palaces you’ve got a backdrop of snow-covered mountains.  Two solid golf venues lie within an easy strike of downtown.  LakeRidge Golf Course, designed by Robert Trent Jones, offers a classically styled parkland layout that plays to 6,715 well-manicured yards and a par of 71.  The fifteenth hole’s island green, 239 yards away from and seemingly as far below the elevated tee, rivals the famous Coeur D’Alene Resort’s most famous hole.  LakeRidge also has seventeen others worth playing among mature trees and housing developments from many different decades. 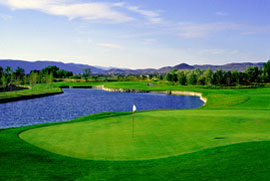 On the outskirts of Reno, set in statuesque foothills, lies Red Hawk Golf Club, designed by RTJ Jr.  This muscular, modern design of 7,127 yards features nearly as many lakes as Minnesota, and about 974,357 bunkers—many of which lurk greenside and offer impossible downhill lies.  Four sets of tees called Hawk, Falcon, Heron, and Swan let you decide whether to be a predator or a sitting duck.  Red Hawk finishes strongly with a 241-yard par three over water and an eighteenth hole requiring negotiation around wetlands and cottonwoods.

Southeast of Reno, along a looping arc to Carson City, the 7,218-yard Arnold Palmer-designed Dayton Valley Golf Club awaits.  This great walking course has it all: pot bunkers, free-form bunkers, wind, OB, thick grasses, and liquid hazards on ten holes.  The par threes, especially, may require snorkeling gear as the greens are mostly surrounded by water.  In case you have a really good day here, keep in mind that Dayton Valley has been a TOUR qualifying site for 12 years, the longest of any golf course.  The 15,000 sq. ft. clubhouse offers fine grub and views as expansive as the feeling of making birdies.

A detour south from Carson City, into the wide, flat valley east of Lake Tahoe, leads to Genoa, Nevada’s oldest town.  Genoa Lakes Golf Club offers play on two courses.  The Peter Jacobsen-designed Lakes Course stretches to 7,263 yards from the tips.  Although a trophy housing development has reared its head, the layout still feels miles from nowhere.  The jagged wall of the Sierras fills the view on one side, and the desert valley unfurls toward infinity in the opposite direction.  Several short par fours offer tantalizing risk-reward ratios and a fine time.  Wind and altitude can combine to make club selection a wild guess—as when I hit an eight iron 190 yards, causing me to scream, “I da man!” 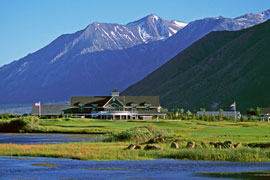 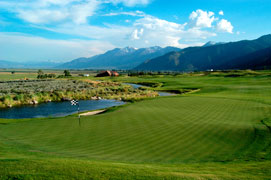 Just up the road is Genoa Lakes Golf Club’s Resort Course, a thoughtful Johnny Miller/John Harbottle design that maximizes at 7,358 yards and a hellacious 149 slope.  The greens are brutal on this slopeside course: slow but with gigundo breaks.  Who wouldn’t love number seventeen, a 188-yarder over a rock-lined lake and playing to a peninsula green with the Sierras providing a gallery behind it?  The saddles that serve as bar stools in the lounge provide the perfect place to end your day.

By heading in a generally southwesterly direction from Genoa, prospecting golfers will eventually reach Lake Tahoe, 39 million gallons of the clearest, bluest water you’ll do well not to swim in if you fear shrinkage.  They say you can see a golf ball 75 feet below the surface of the lake— and if you do, it’s probably one of mine.

A number of courses are scattered along and close to the lake, but none is nicer than Edgewood Tahoe, which alights on most everyone’s ‘Best’ list.  Designed by George Fazio in 1968, and touched up by his nephew Tom since, Edgewood provides a sublime journey through meadows and pine forests.  Its generous greens are slicker than a certain former president (actually, any one will do), and its prestige has been enhanced by the entertainers and athletes who partake in the American Century Championship here each year.  Edgewood finishes with three Lakeside holes that are more startling than difficult—though they may come too late in the round to salvage your score.  The course plays a monstrous 7,445 from the back, and encompasses all sorts of hazards, including trees that stand in the middle of fairways or guard narrow entrances to the greens. 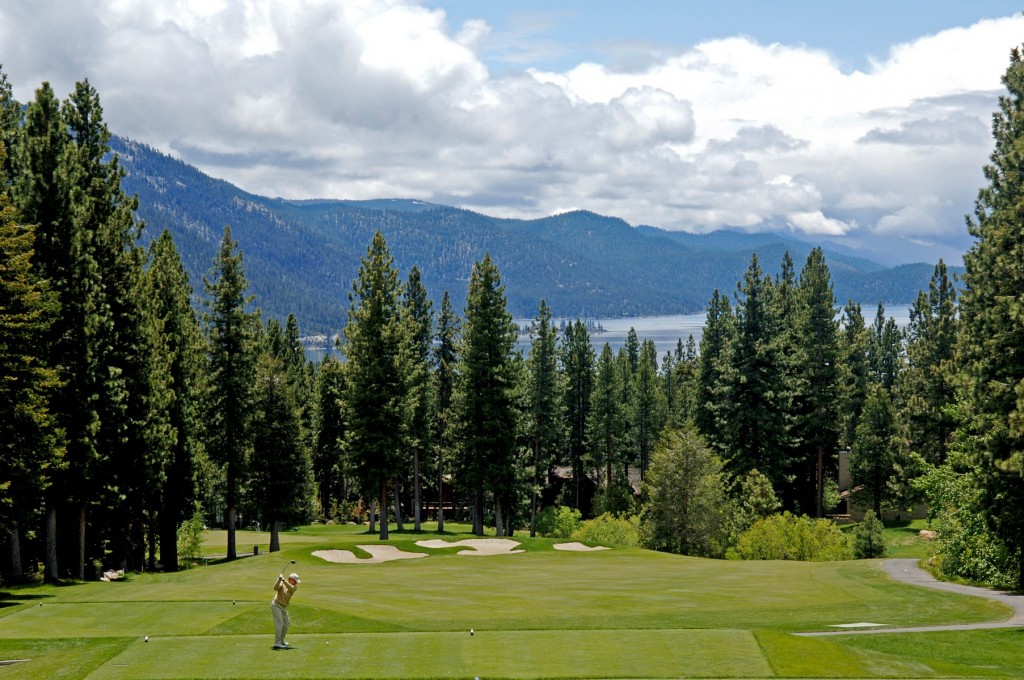 Further north, Lake Tahoe is also home to The Championship Course at Incline Village, a Jones Sr. routing clinging to the mountains.  The 6,931-yard romp features bunkered greens and lateral water on nearly every hole.  And the 6,500-ft elevation may make club selection about as exact a science as astrology.  A roaring mountain stream reappears often throughout your round here—like on the sixth hole, where it shows up twice; and the sixteenth, where it runs the entire length of the fairway before cutting across and forcing a carry to the tri-bunkered green. 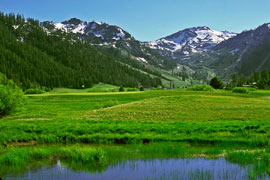 Westward and away from the lake lies RTJ Jr.’s Resort at Squaw Creek, a course that exhibits mountain characteristics although it lies in a high wetlands valley between ski peaks.  Sidehill lies, forced carries, and sneaky greens characterize the well-planned 6,931-yard par-71 venue.  A number of fairways seem to float above marsh grasses and ponds beneath the mountain summits.  Highlights here include the dramatic 484-yard par four conclusion, requiring precise navigation over and around wetlands, lake, and sand. 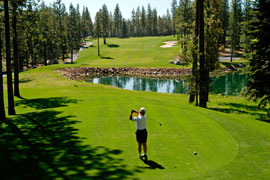 Just west of the historic and fun-to-say town of Truckee, former PGA TOUR player Brad Bell designed Coyote Moon Golf Course amid 250 secluded acres of rolling hills, rollicking elevation changes, towering Ponderosa pines, granite bluffs and outcroppings, and wildflowers, with nary a mansion (or even a shack) to spoil the pristine feeling.  The well-crafted course is intersected numerous times by Trout Creek, which may be renamed Titleist Creek following my recent visit.  The thirteenth hole here, a 227-yard par three that drops more than 200 feet in elevation, will play with your mind and your club selection but also provide the elation of watching your ball stay airborne for what seems like weeks. 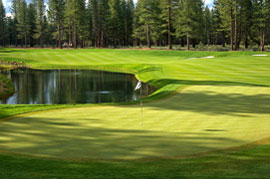 One of the newer ripples in Lake Tahoe area golf is Old Greenwood, a Jack Nicklaus layout also close to Truckee.  Particularly memorable are two par fives stretching to more than 600 yards—unless you shank your tee shot, in which case you’ll try to forget them.  The course tops out at a massive 7,528 yards that curl through ponderosa pines, blue sagebrush and trout-filled lakes.  Old Greenwood was named for Caleb Greenwood, a mountain man who, when in his eighties, led hundreds of immigrants across the Sierra Mountains into California back in the 19th century.  You might long for a guide of your own on this rugged track.  The course is the center of a resort recreation community close to world-class skiing, dining, shopping, entertainment, and the wilderness areas of North Lake Tahoe.

Circling back north from Lake Tahoe, and about an hour northwest of Reno, the Graeagle resort area would make any cowboy or rancher feel right at home.  This spacious high-desert region consists of open meadows and Ponderosa pine forests, clear streams and sparkling peaks.  It’s also got a couple of great golf tracks.  The Golf Club at Whitehawk Ranch—the best among them—was designed by Dick Bailey, who created a collection of holes full of strategy, character, and enchantment.  Trees provide vertical hazards in case the kind on the ground aren’t enough.  The course plays to 6,927 yards, all of them good.  Greens here tend to feature amphitheater-like ridges/collection areas that work well and define the architect’s unique and well-considered style.  Wildflowers bloom in the meadows, and a night at the Lodge at Whitehawk Ranch awaits après golf. 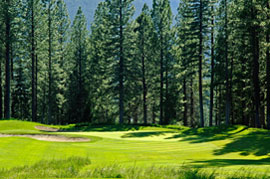 Unlike the Donner party (whose motto was: ‘We don’t have any food, but we have each other’) you can dine well throughout the Sierras.  Following are a few favorites.

Moody’s Bistro, Truckee: (530) 587-8688, www.moodysbistro.com.  If your favorite movie director were to create a 1950s French western it would look a lot like Moody’s, where the atmosphere is only surpassed by the excellent, local, seasonal, and surprising menu.  Start with ahi four ways (poke, sashimi, tempura, sesame-seared), and move on to the anchiote-barbequed “big ass pork chop” which refers to it’s size, not how you’ll look after finishing it.  Desserts here also excel.

Louis’ Basque Corner, Reno: (775) 323-7203.  Hearty peasant cuisine, including lamb, rabbit, stews, and heaps of side dishes, all served family style.  Half the fun depends on who you’re seated next to.  My dinner companions included a group of leather-clad bikers who spiced up an already expertly seasoned meal.

Although pedestrian casino hotels are available in much of the area, a number of smaller Inns, B&Bs, and lodges provide the kind of luxury and/or flavor you’ll crave after a day spent chasing white balls.

Resort at Squaw Creek, Squaw Creek: 800-3CREEK3, www.squawcreek.com.  Fresh off a $53 million renovation, Squaw Creek offers all that’s great about large resorts, including four restaurants, three pools, and shopping, all at the base of towering mountain peaks.  Inside, the black glass monolith’s rooms have been made warm and woodsy, many with fireplaces.

Gray Eagle Lodge, Graeagle: 9800-635-8778, www.grayeaglelodge.com.  Down a remote road, a collection of rustic cabins and a cozy lodge constitute this true retreat tucked amid streams and wildflower meadows.  Hike, bike, fish, or horseback ride practically right outside your door, but enjoy fine dining in the big-beamed main lodge.  During my visit, other guests included a black bear.

2 Responses to “Hitting the Mother Lode: Golfing Reno, Tahoe, and the High Sierras”