[Nov. 11, 2012] I was lacing up my golf shoes before our round at the Bali Hai Golf Club when Sam Brown came into the locker room. We got to talking, and Sam told me about how the Humvee he was in rolled over an IED in Afghanistan’s Kandahar desert, consuming the vehicle and Brown in flames.

Brown was at the course to take part in the third annual Harmon’s Heroes tournament, organized by instructor Butch Harmon and sponsored in large part by JMA Services. Butch puts the veterans involved—many severally injured in the OIF or OEF conflicts—through his school for a couple of days, and then lets them loose in a fund-raising golf tournament that assists wounded vets in acquiring their own homes. 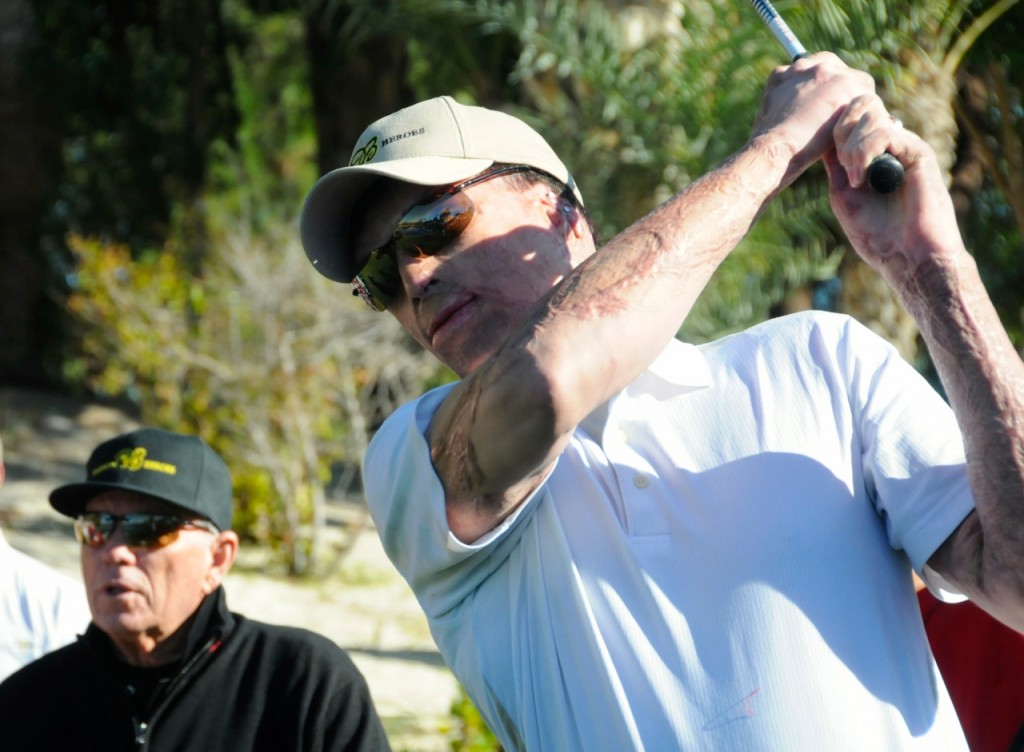 It was Veterans Day. And looking at Brown, it was plain that he must have undergone intense pain and mental anguish in his long recovery from the explosion. But once he related his story he asked me, “Are you a veteran?”

“Yes. I was in the Army during the Vietnam era.”

“Thank you for your service,” Sam said.

I didn’t know whether to laugh or cry. My stint seemed like a joke next to Brown’s ordeal. But he meant it in all sincerity. So all I could do was reply in kind, “Thank you for your service.”

As Butch Harmon put it, after introducing all the participating vets and letting them take a crack at the par-3 sixteenth hole before the tournament proper, “These kids have done everything they can do for all of us—given up their lives or parts of their bodies…. We can’t do enough for them….”

He’s sure got that right. I spoke to Matt Anderson, who had blown his right foot apart in Afghanistan and now had it encased in a wired contraption that was, he admitted, “Every bit as painful as it looks.” 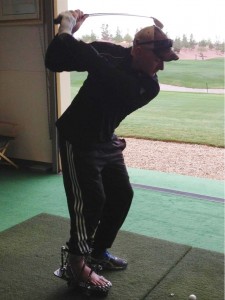 Matt Anderson in the practice barn

Yet Matt holed a 40-foot eagle putt to take his team to the -17 winning margin.

We thought we were doing pretty well battling to -10 on the day, us being the four Golf Road Warriors and the real warrior, Jared Lemon.

We use our moniker with tongue firmly in cheek, of course. About all Golf Road Warriors have to complain about is shaky wireless service in the hotels, a missed wakeup call, a scarcity of booze in the stretch limos we’re provided with.

Jared, a natural righty, lost his right arm to a land mine explosion during his second tour of duty in Afghanistan. Now 31, he’s going at golf from the left side, swinging with his remaining left arm.

He had mixed results in our round, smacking some shots on the screws, but hitting the occasional worm-burner as well. “It’s not as easy as it looks,” he said, after GRWs Jeff Wallach, Aubrey McCormick, Robert Kaufman and I gave it a try with one hand. We all foozled shots. I should say I foozled a shot after whiffing completely. Robert finally knocked one out there after also whiffing, but yes, we confirmed that it wasn’t easy.

It made Jared’s persistence, patience and good humor even more impressive. And the Harmon’s Heroes initiative speaks well to the therapeutic nature of golf. Both Jeff and Aubrey were not long back from ten days of traveling and playing with wounded vets on some of the great courses of Ireland. And near her home in Washington, D. C., Aubrey volunteers as an instructor with the Salute Military Golf Association.

We all contributed to our good (if insufficient) tournament score. But the excitement level ramped up on the eleventh hole, when Jared lined up about a 45-foot putt and stroked it right into the jar for a birdie. 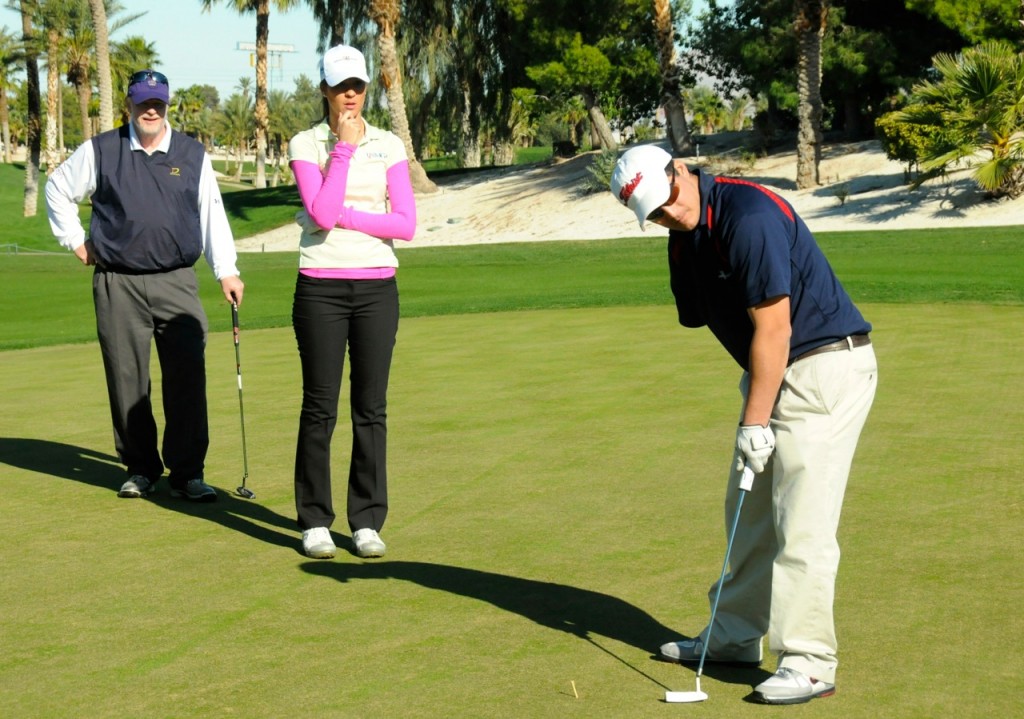 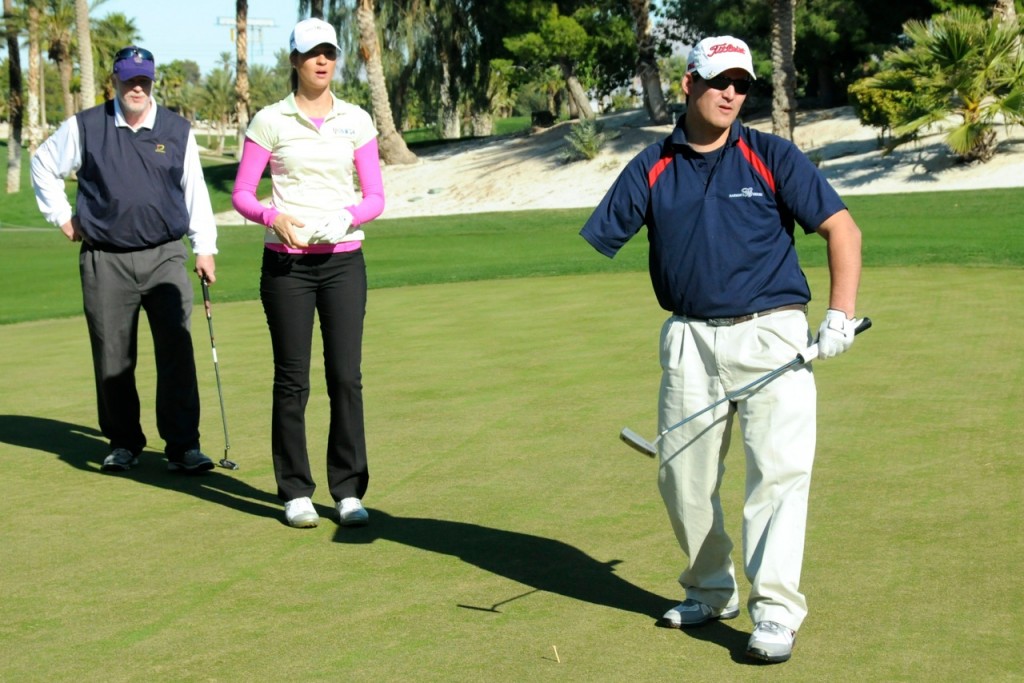 With a beaming smile, Jared admitted, “That just makes me feel so good.” Well, we were all ecstatic. Say it was only a putt, and then only the memory of a putt, but it’s always worth being reminded that there are some things that can never be taken away from us, particularly on this memorable Veterans Day. 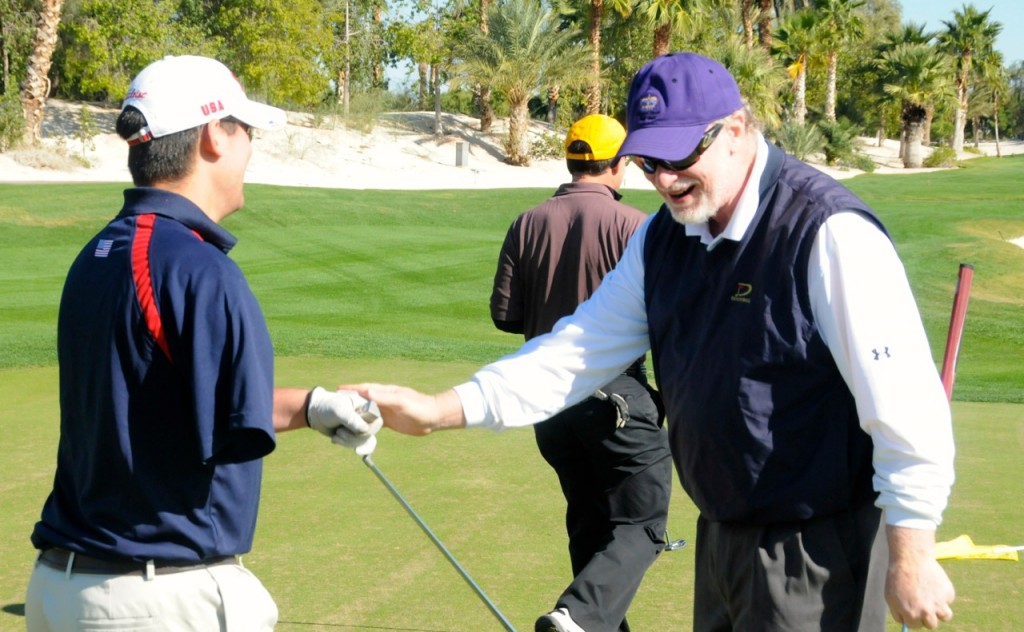