I recently scored a bottle of the Full Sail Wassail at Brewtopia, the fine brew and brewing supply store in Keene, New Hampshire. The shop carries many a beer I haven’t found here in Vermont. Only problem is that Keene is a good hour roundtrip for me, so the danger is blowing a serious wad at Brewtopia in the thought I might not pass this way again soon.

But I behaved myself this trip, since I was really out Christmas shopping, and had actually stopped in hope of finding some gift beers.

The Wassail was a gift to myself. I hadn’t had any Full Sail beers since I got on the bus in Portland, Oregon, as part of the 2011 Beer Bloggers Conference in mid-August. We were heading for the Goschie Farms hop fields right in the middle of harvest season. The trip from Portland to Silverton in the Willamette Valley should have taken about an hour, but late on a Friday afternoon in good weather, we wound up trapped on the bus for well over two hours.

Trapped, in this case, wasn’t so terrible, since representatives from the Full Sail, Widmers, Rogue and Ninkasi breweries were on hand to introduce and pour their beers. A picnic and the smell of fresh hops was awaiting us at the end of the journey and there was a working bathroom on board, so all was well.

Full Sail will soon hit its quarter-century mark, a ripe old age for a microbrewery. It began in an old fruit-pressing factory overlooking the Columbia River Gorge and in 1989 became the first craft brewery in Oregon to bottle its beer, the Full Sail Amber. What’s lost now is that an amber beer was rather startling at the time, and so was the name. The Amber is still the company’s flagship beer, but it puts out a full range of year-round, seasonal and specialty brews.

At its twelve-year mark in 1999 the brewery became employee-owned, and it still bandies the number of the owner/employee workforce on each bottle (47 currently). 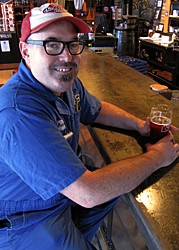 Two of them were on the bus, brewing supervisor Barney Brennan and executive brewmaster James Emmerson. They poured three beers for us, marching upwards in ABV.

The first came from the throwback session lager series–Session–meant as a tribute to the way beers used to be pre-Prohibition, including the squat 11-ounce bottles. We had the Session Black, indeed as black as night, but a 5.4% ABV lager that was crisp and appealing, with a bare hint of roast.

We followed that up with one of the lagers in the rotating LTD series, meaning limited edition, although Emmerson said it also meant “Living the Dream,” which apparently all of the Full Sail employee owners are doing. 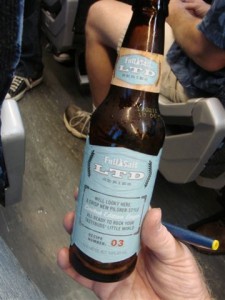 We had the LTD 03, a Pilsner-style lager at 5.6% ABV, that had a spot of wheat in the grain bill, and all Sterling hops. It was also a crisp, bright beer with a nice hop bite at the finish.

From the year-round beers we had the IPA, which for a northwest beer was not overwhelmingly hoppy, brewed more to the English-style, but still with a sturdy 6% ABV.

Like the Celebration Ale from Sierra Nevada I drank last week, and despite its name, there are no spices or additives other than malt, water, hops and yeast in the Wassail; its inveigling character derives solely from the four ingredients.

And not that the Celebration needs any kind of corrective, but non-hop heads might find it with the Wassail, and the two beers make for an interesting contrast. 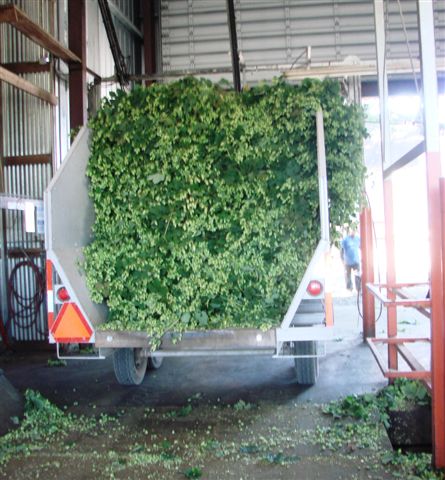 Freshly harvested hops at the Goschie Farms in Silverton, Oregon

Brewed since 1988, the Wassail is a deep mahogany brew that, though it still has a considerable hop character, is skewed toward malt. The nose is sweet, fruity, with a touch of dark cherry. The palate is spicy, woody and toffee sweet, and the finish is subtly bracing rather than aggressive. It’s a mouthful, all in all.

Full Sail actually puts out three holiday or winter beers. The Wassail is the most potent, followed by Wreck the Halls from the Brewmaster Reserve Series (6.5%). A newer entry is the Fest Lager in the Session series (6.2%).

It would have been nice to try all three, but maybe that’s something for next year’s Christmas list.